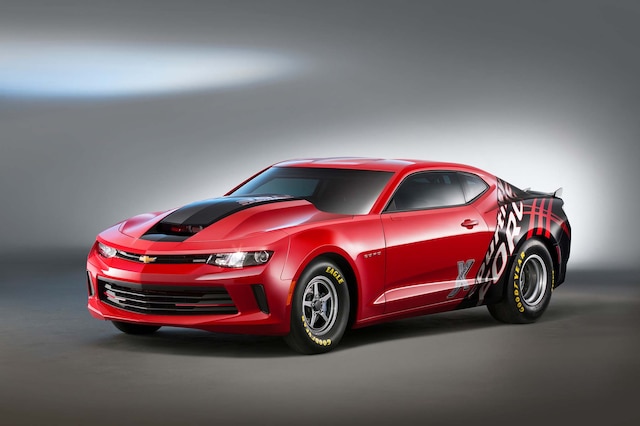 As it has in previous years, Chevrolet will produce 69 COPO Camaros in homage to the original 1969 COPO Camaro, and as usual, it will be available with several engine options with a Whipple-supercharged, LS-based, 350ci V8 powering the first example on display here at the SEMA Show. A naturally aspirated 427ci, LS-based V8 also carries over from the fifth-generation COPO Camaro program, with a 6.2L LT-based engine making its debut for 2016. All engines are backed by a Turbo 400 three-speed automatic transmission.

This unique COPO, built in collaboration with Courtney Force, wears a custom graphic across the decklid and quarter-panel as well as a stripe along the tall carbon-fiber hood. Inside the caged interior are lightweight bucket seats featuring the COPO logo and Courtney Force’s signature. As it’s the first production COPO for 2016, Chevrolet will offer it for auction at a Barrett-Jackson sale in 2016, with the proceeds going to United Way.

Rather than the factory multi-link independent rear suspension, production COPO Camaros will all use a solid rear axle with an aluminum centersection and spool-type differential with 40-spline, gun-drilled axles located by a four-link with an adjustable Panhard bar, coilovers, and stabilizer bar. Steering and braking, using lightweight four-wheel discs, are both manual.

Interested buyers must register HERE and 69 purchasers will be randomly selected by an independent third-party. When production begins, buyers can select from the three engines, depending on their intended race class, and then each car will be built by hand.