A 1965 Chevrolet Nova that Crushes it on the Track!

All-In: Speedway Motors holds nothing back with their track-ready 1965 Nova 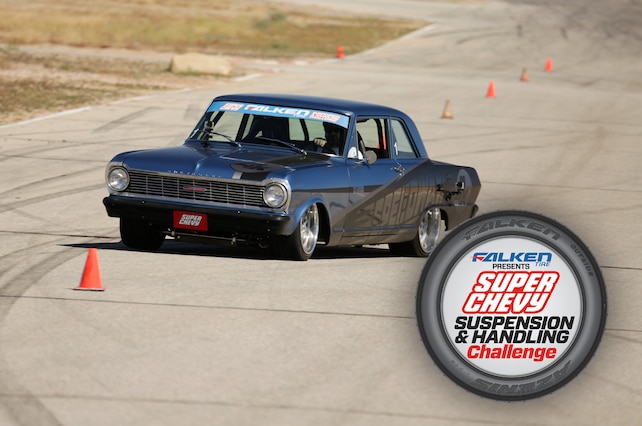 When a company long known for aftermarket speed parts decides to go all-in with a performance suspension package, you know it’ll be good. But, when that same company decides to get input from a pro racer like Robby Unser, you know it’ll be great. And such was the case with the G-Comp suspension on the 1965 Nova Speedway Motors brought to the 2015 Super Chevy Suspension & Handling Challenge, presented by Falken Tires.

As Speedway Motor’s Damon Lee explained, “Robby Unser’s relationship with Speedway Motors and the Smith family (owners of Speedway Motors) dates back more than 25 years. In the late-1980s, Carson Smith and Jason Smith (the oldest and youngest sons, respectively, of Speedway founders “Speedy” Bill and Joyce Smith) campaigned a Lola-Chevrolet in the American IndyCar series, and teamed up with Robby to handle driving duties. That relationship resulted in Robby winning the 1989 American IndyCar Series title.

“Considering that history, it was natural for Carson to turn to Robby Unser to drive the G-Comp Nova for Team Speedway. Robby’s expert driving skills not only helped to wring the most performance out of the little Chevy II, but his feedback has allowed the Speedway Motors R&D team to continue refining the package. Robby’s cousin, two-time Indy 500 winner Al Unser Jr., has also gotten involved in Team Speedway, and input from the two drivers has led to the Unser Editions of the front and rear suspension packages. Both Unsers have also provided input for the forthcoming G-Comp suspension packages for first- and second-generation Camaros, which should be in production sometime in 2016.” The Nova the team brought was a finished and driving car that had been fully restored years back. Since starting the project, everything on the car, except for the paint and glass, has been retrofitted for the aggressive competition driving Speedway had in mind.

Of course, since this was their hard-core competition car, the suspension received some extra attention. “The setup we used at the Super Chevy Challenge is the Unser Edition of the G-Comp front suspension. With Robby and Al Unser Jr.’s input, the Unser Edition G-Comp frontend is designed for all-out performance and increased tuning options for those who may want to get more serious about competition. Upgrades include a machined aluminum brace between the subframe and the firewall support tubes. This brace holds the upper shock mount and allows for full adjustability of the mount. Other differences include 3 degrees of additional caster built into the upper control arm and a reshaped lower control arm to accommodate up to 275/35R18 tires. The rear suspension is Speedway’s new G-Comp setup, which replaces the stock leaf springs with a truck arm design. Like the front, there’s a regular version and a G-Comp Unser version,” explained Lee.

The drivetrain is as serious as the suspension and is centered around a Speedway Racing Engines-built 406-inch 1994 V-8 small-block. Filled with a Callies 3.750-inch crank, forged Callies rods, Mahle pistons, COMP camshaft, and topped with BluePrint aluminum cylinder heads running a Jesel shaft rocker system, the mill makes a pissed-off-sounding 12.5:1-compression ratio and churns out 620 hp at 7,000 rpm and 590 lb-ft at 6,500 rpm, more than enough to get the 3,080-pound Nova around any track. To keep things slippery at high rpm, they installed a dry-sump oil system with a Barnes pump and modified Sprint Car tank. An AFCO radiator handles cooling duty, and the fuel is fed by a Speedway Motors road race 750-cfm carb sitting on an Edelbrock intake manifold. MSD ignition sends spark, and the mill exhales through a set of Dynatech G-Comp headers. Backing up the potent small-block is a Tremec five-speed transmission with straight-cut gears and fitted with a Ram clutch. From there, the power spins back through the aluminum driveshaft and into the Speedway-built Ford 9-inch rear with 3.50 gears and a Salisbury-type limited-slip differential.

It all makes for a very serious, competition-ready Nova and shows what Speedway’s line of suspension parts is capable of.

In preparation for my part behind the wheel, I must tell you a few things. One: I do not drive these cars at 10/10ths … EVER, as they’re not my cars. Two: the reason I don’t drive the snot out of them every single second is I don’t have to, to be able to tell a lot about a car’s “comfort zone.” I can smack one silly through a corner but on the straights, I cruise relatively sedately, and unless I’m driving something that has the horsepower of a slug, I will rarely ever go WOT. And Three: if I do run out of talent or—God forbid—the owner or builder ran out of talent during the assembly process, I’m more apt to stay on the paved part of the track and won’t have to have “that conversation,” where I explain why and how the bad thing happened. This is my agenda for every car I’ve ever driven for the Super Chevy Suspension & Handling Challenge.

I had an opportunity to drive this same car about three weeks prior and when Robby asked me what I’d change, I told him “soften it up a bit and get rid of that 14-inch steering wheel.” For today’s testing, I got one of the two … the steering wheel.

Me: “Can we soften the shocks?”

Me: “Uhhh … so if Al Jr. was driving this car, what would he do with these shocks?”

Me: (laughing) “So where would you like your bruise and I will NOT forget this!!”

Once behind the wheel, I found all of the interior accouterments fit me perfectly as Robby and I are pretty close in height. Of that, the similarities end, as he’s greatly talented behind the wheel of most anything and I am more than a few behind him. Taxiing to the track, I immediately realized that Speedway Motors designed this suspension strictly for the higher-performance and competition crowd, and they’d made that transition in a big way. This car is very “point and shoot” with excellent positioning for corner entry and mid-corner response. There is minimal understeer and I appreciate this as a car being tight is much easier, and safer, to hurry through a turn over the reverse. Unfortunately, corner entry in the rougher spots on the track produced some “jacking,” or lateral skipping, and felt like a shovel striking stone. It didn’t appear to slow the car down any but did affect lateral traction and delayed turn-in response. It would have been good to try a softer shock setting and see if this could be eliminated.

I loved the brakes as they were very linear (the harder I pushed, the better and faster the Nova got whoa’d up) and the pedal had an excellent feel. The Nova was very fun and I found it easy to put the power down.

Yes, this IS a competition setup but one that if you’ve got the stones, will give results. At times, I felt like I was trying to catch lightning in a bottle but that cool OMG out-of-body feel you get after completing that perfect autocross run or track lap made it worth it. For those of you who may never turn a wheel on a track at speed, don’t forget that Speedway Motors does have a milder version of “The Unser.” Softer shock valving, softer springs, a bit looser on the sway bar adjustment and you’re good to go.