The Supernatural: This 16th Birthday Present – A Stunning ’66 Impala – Is The Stuff Of Dreams 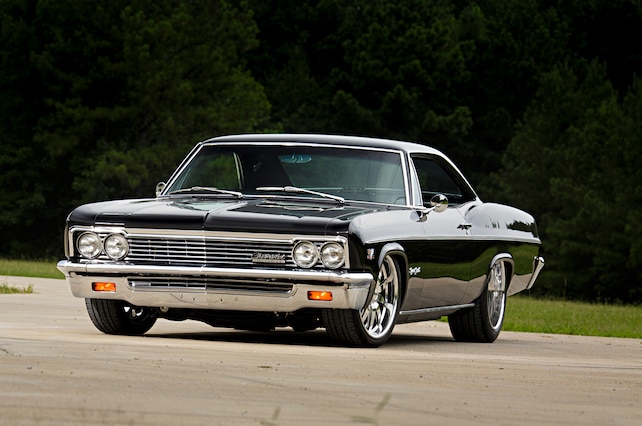 No less an author than Oscar Wilde exclaimed that “life imitates art,” and while it may be presumptuous to connect his writings with the build of a hot rod, it’s an apt association. This 1966 Chevrolet Impala was the choice of one Nathan Denson when his father, Steve Denson, asked what kind of car he wanted for his 16th birthday. You see, Nathan is a serious fan of Supernatural, a television series where leading characters Sam and Dean Winchester – professional ghost and demon hunters – pilot a 1967 four-door, black Impala on their runs to chase down the bad guys.

“I told Nathan when he turned 16 that I’d buy him a car that was reasonable, thinking he’d pick out a Camaro or something like that, and then he comes to me and says ‘Dad, I want a 1967 four-door Impala.’ It blew me away. I wish he would have picked a Corvette — it would have been a lot cheaper than what I have tied up in this car,” says Denson.

Although this car is not an exact match to Nathan’s wish, it serves the purpose. An Internet search turned the car up — complete with bullet holes for effect — in someone’s backyard in Lubbock, Texas. Lubbock is a 15-hour ride from the Denson homestead in Gadsden, Alabama, but Steve looked at the car and knew it had to be the one.

“Pictures on the Internet can be deceiving, but as soon as I saw the curves on the car — that look — I just knew it was going to be a nice car. I went to U-Haul, rented a trailer, we pushed the car up on it, and I took the car back to Alabama,” he says.

Initially planned as a father-and-son restoration project, the Denson boys quickly realized that the amount of work the car needed was well out of their skill set. Steve, a construction contractor by trade, tells us that sometimes it’s better to leave the professional jobs to the professionals, and with the appearance of this car, we’re inclined to agree.

“My son and I tinkered around with it first. I can change the oil in a car, and put gas in it, but the total rebuild — that’s just not my cup of tea. I met Jason and the crew at Big Oak Garage and was real impressed with what they’ve done. So I gave them my checkbook and my car,” laughs Denson. “Nathan and I tore some of it apart in the garage and played with it, busted some knuckles together, then decided that we’d get some professional help.”

Put simply, Denson says that he delivered a bucket of bolts to the Big Oak Garage and received back a complete, running car that he wouldn’t hesitate to drive cross-country should the need arise. The car mostly stays in the garage these days unless Steve and Nathan take it out to a local car show or cruise-in, or lend it to the Big Oak guys for display at a show. Nathan, currently a student at Auburn University, comes home from time to time and will hang out with Dad to enjoy the car’s performance.

The aforementioned Big Oak Garage, which is a full-blown hot rod shop in Denson’s hometown of Gadsden, Alabama, was tapped to handle the complete, frame-off build of the Impala.

“Steve approached us about working on the car, and we had to be the bearer of bad news; after inspecting it we determined that it needed floorpans, a trunk pan, both rear quarters, and one new front fender,” says Big Oak’s Jason Latham. “He came referred by another friend of ours, and he had seen some of our work.”

The car, originally equipped with a big-block engine, didn’t have the big-block in it when Big Oak received it. And Latham says that his team suggested leaving the small-block that was in the car there, to give young Nathan a chance to get his feet wet with V-8 power, but Steve had his heart set on returning the car to its roots.

To that end, a ZZ427 crate engine from Chevrolet Performance Parts was picked out. The 10.1:1, internally balanced engine makes 480 horsepower and is topped off with a 650-cfm Holley carburetor — plenty of power to help a teenager get into trouble, although Steve tells us he drives the car more often these days. It’s cooled through the use of a Brice Thomas custom three-row radiator.

Exhaust is handled through a set of 1 3/4-inch Hedman headers and stainless-steel 2 1/2-inch exhaust featuring a set of Borla ProXS mufflers.

In the interest of maintaining some semblance of fuel economy, an overdrive 700-R4 transmission with 2,000-stall converter assembled by Performance Automatic was chosen to back up the engine. Power runs through a PST driveshaft back to the 3.73:1-geared 12-bolt Moser-assembled rearend that’s been narrowed 1.5-inches per side.

The car’s stance was also important to get “just so.” RideTech’s Stage 2 coilover system was fitted to the car, complete with RideTech A-arms and adjustable shocks. Wilwood brakes bring the car back down from warp-speed runs, achieved on a set of Schott F-10 wheels measuring 20x8.5 in the front and 20x10 in the rear. Tires are from Pirelli’s P-Zero line; 255/30R20s up front and 275/40R20s in the rear complete the look.

Inside, a Vintage Air system was installed to help cope with the hot and humid Alabama summers. The interior was restored to stock-type appearance, using black vinyl to cover the seats and a black carpet to finish off the stealth look. Classic Instruments’ G-Stock series gauges help to keep tabs on the engine’s vitals. One unique feature is the hand crank window handles; they keep the appearance original even though they control a power window system.

“We’re trying to put our own style into the cars that we build, but ultimately it’s the customer’s decision as to what we do. We made recommendations, and what you see is what Steve chose, which we’re very pleased with as it’s very much the style of car we build,” Latham explains.

The car owes its impeccable PPG base/clear black exterior to the entire team at Big Oak Garage; after replacing the ailing sheetmetal, the car’s flanks were massaged laser-straight before the paint was laid down.

“The crew at Big Oak Garage were great to deal with. We explained what we wanted the car to look like, and they did exactly that. The car was dead and lifeless, and now it’s beautiful; back to life, better than she was when she came out of the showroom,” says Denson. That’s the kind of life a hot rod deserves.