Active Duty: A twin-turbo C6 that puts the ‘grand’ into Grand Sport is a retirement gift that keeps on giving 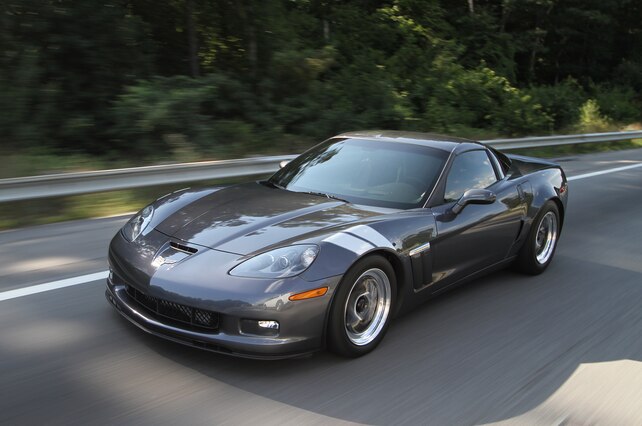 As any Corvette fan knows, the heritage of the Grand Sport is rooted firmly in all-out performance. However, in modern times performance is thought of and used in different ways. The Corvette is no longer hunting Ferraris and Porsches on just the road course, it’s taken the battle to the streets, the dragstrip, and even airports. Airports? Yes, airports — the only piece of asphalt long enough for high-powered supercars to actually stretch their legs here in the States. Brett Linville’s 2011 Corvette Grand Sport hit 177 mph in the half-mile earlier this year, which has become his new favorite pastime when he is not at the dragstrip or cruising the streets.

Brett purchased the Grand Sport back in December 2010. “I always loved Corvettes. My best friend’s father had a C2, and I always liked them over the years. When I retired from the Army, I made it [the Grand Sport] my retirement gift to myself.” These days, he says, it spends half the time on the road. “I take it to work on Friday and to the beach if the weather is good. I don’t like to have it out in the rain. I love the looks you get. It’s sneaky until it starts whistling and then people will notice. It is extremely comfortable to drive. Since it is a Grand Sport I can take the top out, which still fits in the back even with the rollbar.”

The buildup of Brett’s Grand Sport began a few years ago at Mayhem Motorsports. Living just an hour away from the Raleigh, North Carolina-based shop, it was hard not to notice the crew at the track and other events. Mayhem’s turbo C6 tends to garner quite a bit of attention making 7-second passes at the dragstrip. Who better to approach about building a boosted C6? Originally, his combination included a supercharger, cam, and methanol injection to spice up the stock LS3. “I was looking at a bigger supercharger, but I found out I would have to cut into the radiator and get a different hood. Mayhem said it would be easy with turbos to make the kind of power I wanted. They did one for a C5Z that is owned by a friend of mine that I liked. A guy offered to buy my LS3 and another guy wanted my supercharger, so I decided to go big.”

With all the justification he needed, Brett commissioned Mayhem to build a large-cube engine and a custom twin-turbo system. The foundation of the new combination was an ERL Performance M3 short-block, which uses the Superdeck I sleeved and reinforced factory block along with Wiseco pistons and a Callies rotating assembly. The low-compression piston and ring package was designed specifically for turbos, while increasing the displacement to 427 cubic inches. The handbuilt bullet was topped off with Trick Flow GenX 260 LS7 cylinder heads, assembled by Total Engine Airflow, as well as factory LS7 rockers with BTR trunnions, a custom 228/224 hydraulic roller cam with 0.630/0.612-inch lift and an LS7 intake manifold.

In preparation for the hellacious boost devices, Mayhem went through the rest of the C6 and removed any weak links. The posi clutches were upgraded in the factory 3.42 rearend and the TR-6060 six-speed manual was given a full overhaul by RPM Transmissions. A McLeod RXT twin-disc clutch with a billet flywheel provided the necessary clamping force and street manners. The original organic linings had to be swapped out for ceramic discs due to the brute force of the turbocharged 427. Meanwhile, a Holley Dominator fuel pump with Injector Dynamics 1,300cc squirters were needed to keep up with the fuel demands. The factory fuel pump is still employed for idle and low boost, but a Hobbs switch activates the Dominator under boost and the regulator returns fuel via an external sump on the factory tank. Pump gas supplemented by an Alky Control dual nozzle kit provides the fueling on the street, but VP110 is used at the track and on the dyno.

The real star of the show is the turbo system. Lurking just behind the gills of the Grand Sport fenders is a pair of Turbonetics billet wheel 64mm snails. The small external size allows them to tuck nicely out of the way without relocating nearly anything, according to Jay Garlington at Mayhem. The one exception is the factory dry-sump oil tank, which required the switch to a standard C6 wet-sump oil pan and Melling high-volume pump. Mayhem Motorsports used LS3 exhaust manifolds and milled down the flange before welding on the V-band to connect to 2.5-inch hot-side pipes with twin JGS 40mm wastegates to regulate boost. Three-inch downpipes connect to a Kooks X-pipe and Borla S-type exhaust system. On the cold-side, Mayhem bent up 3-inch pipes to feed a 4-inch-core air-to-air intercooler. A single 3.5-inch pipe leads to the JGS 60mm blow-off valve, LS7 MAF and ported throttle body.

With Jeff Rhodes tickling the keyboard, Mayhem had the Grand Sport kicking out 1,014 horsepower and 982 lb-ft of torque to the wheels (set on 16 psi). Conditions permitting, the boost goes as high as 18 psi at the track. To date, the GS has only hit 10.3 at 145 mph as Brett continues to refine his driving technique. He noted that launching with the MSD 2-step is quite a bit different with turbos than with the supercharger, given the different boost characteristics. So far he has managed a quicker 1.57 short-time with the 325mm M&H drag radials and skinnies mounted on 17-inch Weld wheels. Perhaps the car would be easier to launch with 15-inch wheels and slicks, but where is the fun in that? Plus, he’d have to loose those big GS brakes. And with this much power, Brett can use all the stopping power he can get!

The widebody slathered in Cyber Gray paint lowered sufficiently on Weld RT-S wheels with big brakes lurking behind gives Brett’s Grand Sport some attitude, though it never gives anything away. This is a supercar to be taking seriously, with its fangs mostly hidden just behind the fender gills. But look at it at the right angle or hear it at the right rpm and it’s apparent just how dangerous it can be. It is a finely tuned weapon, fit for active duty.

We went over to AntiVenom EFI to see just how easy it was to install a Kooks long-tube header system onto this 2011 Corvette Grand Sport, giving it a quality exhaust setup to increase power!

Trick Flow Specialties’ new LS3 head/cam kit yields Z06- killing performance, with zero tradeoffs. Check out our install onto a 2011 Chevy Corvette Cyber Gray Grand Sport for a step-by-step guide, and our video at the end of the article!

In this article VETTE gets an inside look at the 2011 Corvette Racing C6.R ALMS GT class race car, including a focus on the engineering, technological, aerodynamic, and cosmetic changes from the former GT1 class racer - Vette Magazine

In this article VETTE goes behind the scenes with SPEED to bring you an exclusive look at the TV show Test Drive: Corvette - Vette Magazine

» Read More
Dream Giveaway Corvettes - What Dreams Are Made Of