Through Dedication and Hard Work, This Corner-Carving 1973 Chevrolet Camaro Came to Be

A Labor of Love 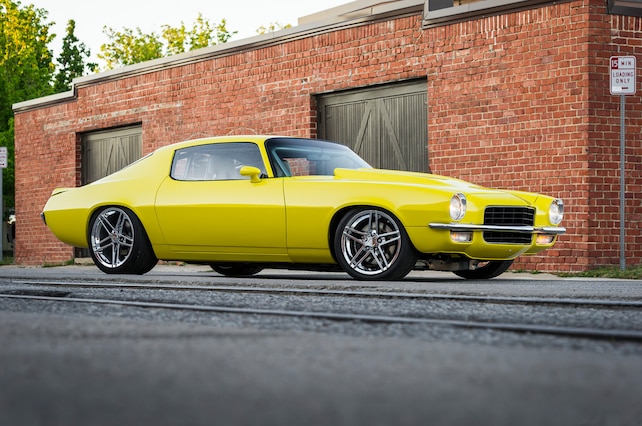 The second-generation Camaro holds a special place in the hearts of many enthusiasts. Its streamlined look and sleek, sloped lines scream “FAST!” in an especially ’70s way. And, while they are now becoming far more desirable as project cars, back in the late 1990s it took a special kind of enthusiast to restore one. Mike Buchanan of Wichita, Kansas, just happened to be such an enthusiast. “I’ve been a Chevy guy all my life. I had one dark spell where I owned a couple Mazdas, but other than that, everything has had a Bow Tie. Right now I have two Chevy-powered dragsters, the Camaro, a ’61 Impala with an LS motor in it, and then all of our daily drivers are Chevy: my truck, my wife’s SUV, and all of my kids’ vehicles,” Buchanan proudly related.

“I’ve been messing with cars ever since I can remember,” related Buchanan of his early exposure to the automotive arts. “My dad was always working on them, and when I was young he’d buy an old car, get it running, and then sell it. He graduated to rebuilding wrecked cars from there, and I was always hanging out with him, so naturally I picked it up.” Another natural step for the young man born with a wrench in his hand was to attend a Vo-tech (vocational) high school. “I started building hot rods when I was in high school, back when you could have a wrench in school without getting expelled,” laughed Buchanan. “As soon as I graduated, I started working in the automotive industry. That was cool, because then I got onto equal footing with my dad, and we would help each other out, professionally.”

With such a solid mechanical background, it was only a matter of time before Buchanan started building project vehicles. Oddly enough, it was his ’68 Camaro project that led him to his current ’73. “In the late ’90s I had a 1968 Pro Street Camaro with a blown big-block in it. I went on the Power Tour with it and someone there had a second-gen Camaro. It was lowered, with mini-tubs, and it really just looked awesome and hit me in ‘that way,’” recalled Buchanan of the formative stages of this current project. “I thought, ‘I’d like to build something like that’ and so I quietly put the word out that my Camaro was for sale. A friend of mine jumped on it, quick, and the hunt was on for a second-gen.”

“Hunt” really does describe Buchanan’s quest to find a second-generation Camaro, as it wasn’t as easy as he’d thought it would be to locate one. When he did finally find his jewel, it was practically in his backyard, but in rough shape. “I actually ended up finding the car locally. It was in pretty sad shape when I found it, but it was the only one I could find. It was a driver, and it was a 50-footer, with paint and some Rallye stripes on it, and some mag wheels. Up close though, it was rusted really, really bad,” Buchanan said.

Not to be deterred, he dove right in. “When I got it all apart, it looked like someone had replaced the front end at one point, but all the other sheetmetal was eaten up. I replaced the rockers and quarters and floors; trunk panel, taillight panel, decklid. All I was able to save was the cowl and the roof,” said Buchanan with a mix of nostalgia and frustration in his voice. “Back in the late ’90s there wasn’t a whole lot of aftermarket sheetmetal available for second-gens. You couldn’t buy full quarters, just skins, and there were places that would just have one side of something, because it was all leftover GM inventory. We managed to muddle through and get it all repaired, though.”

It was about that time, while doing all the metalwork, that inspiration hit Buchanan in the form of a crafty engineer friend. “There weren’t a whole lot of off-the-shelf solutions for a Pro Street-style second-gen back then. Luckily, I have a friend here in Wichita, Steve Fagan, who is an engineer and a gearhead like me. We were talking about getting the car to handle better, and at the time, frontend aftermarket options were nonexistent,” reminisced Buchanan. “[Fagan] mentioned that a few years prior, he had put a C4 Corvette frontend under a ’65 Impala. We talked about it and he actually showed me the Impala. I thought it was a cool idea, so we did it.”

While grafting a C4 Corvette front suspension onto a ’73 Camaro chassis sounds like an extremely intensive project, Buchanan downplayed its difficulty, saying, “It really wasn’t that bad getting the suspension in, but it moved the engine back so far that the firewall really had to be recessed. That’s where all the hard work was.”

Unfortunately, right as the end of the project was in sight, tragedy struck the Buchanan family. “I worked on the Camaro steadily from 1998 to 2001, and had it almost ready for paint when my wife was diagnosed with cancer. That put the whole project on hold. When she passed in 2004, I still had one child living at home, so I spent all my time being a single dad,” recalled Buchanan. “I didn’t have the time or the desire to work on it, so it sat untouched for several years. I remarried, and we bought a new house, and I built a nice shop, but I didn’t think I’d finish the car.

Then, my daughter bought my old house, where the Camaro was parked. She asked me when I was going to come get my car. So I brought it home where I was forced to see it every day, and it got me thinking. I had so much time and money into the car, I figured I should finish it.” Trying to motivate himself, Buchanan painted the car with PPG two-stage 1976 Corvette Yellow with the help of Roger Bybee and Brian Jacobs. “Sure enough, with the paint on the car, I was eager to get everything buttoned up,” Buchanan said.

“We were having issues getting it to run right, but it was kind of running, and then I bought my dragster and the Camaro got put on hold again.” However, the wait was a short one, and the ignition component that was giving him fits was located and replaced, allowing him to stretch the car’s legs. Completed and running, the ’73 Camaro sports a 1993 LT1 measuring 355 cubes, with an LT4 Hot Cam, 11:1 compression, all putting out 315 horsepower and 318 lb-ft of torque at the rear wheels. A T-56 six-speed manual transmission gives the combination a modern, sporty feel, while a 10-bolt with 4.10s and a limited-slip out back keep the tires planted. Up front, the OEM C4 running gear has been upgraded with Delrin bushings and RideTech air-ride suspension.

In the back, Air Ride components were again utilized, along with C4 Corvette brakes at all four corners. Staggered Z06 wheels, 18x9.5 up front and 19x12 in the rear, wrapped in meaty Nitto Invo rubber keep the Camaro planted, regardless of which direction the g-forces are coming from. Corbeau seats and a Simpson five-point harness, along with a 10-point rollcage keep Buchanan safe and add some rigidity to the chassis. A Billet Specialties steering wheel, Hurst shifter, and Auto Meter gauges accent the interior, as do the door panels Buchanan crafted himself. He also grafted turn signals into the outside mirrors for a modern touch on this classic.

Even though he’s a drag racer and his dragsters run in the mid-7-second zone in the quarter-mile, Buchanan has never taken his prized Camaro down the track. “It’s ridiculous!,” laughed Buchanan. “It’s not a power monster, but with the 4.10 gear and the six-speed, it’s fun. If I did it all over again, though, I’d have gone with LS power. Back in ’98, the LS was still kind of an unknown platform and no one really knew their potential. I thought about switching midway through the project, but I figured that if I started over with the engine, the car would never get done.

After a nearly two-decade journey, Mike Buchanan’s second-generation Camaro is complete and on the road. He drives it around town and to a weekly breakfast with his fellow car nuts. There is still something left that he’d like to do with the car though. “I would like to get it onto an autocross track. I went to an event and just sat and watched the autocross all day long; it looks like so much fun. My wife teases me about the drag racing and working for a month for 7.5 seconds of fun, so autocross looks like a much higher fun-to-preparation ratio,” Buchanan laughed. It may have been a long and arduous journey, but the final product puts a smile on Buchanan’s face every time he drives it, and that alone makes it all worthwhile.