This Home-Built 1973 Chevrolet Camaro Will Knock You Out

His Aim Is True: With a little help from his friends, artisan builds cool Second-gen in his home garage 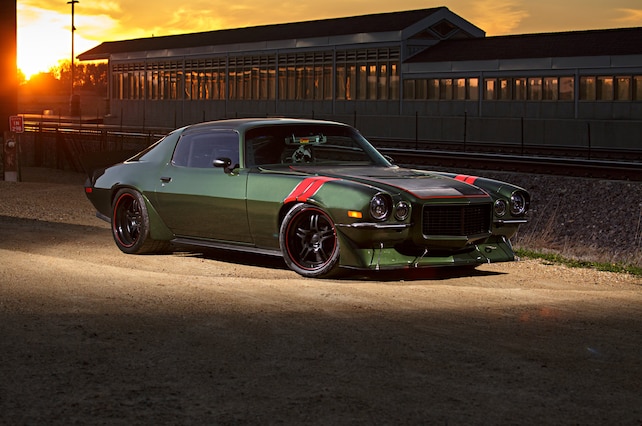 Jim Stehlin doesn’t work per se, rather he crafts. He derives his livelihood from building custom-made cabinetry. Wood is the naturally occurring medium and simultaneously reflects the past and the immediate present. It is comforting to the eye, soothing to the psyche. The key is that the material is intrinsically beautiful and that Jim’s expertise reveals the warmth in its luster and grain. He simply carried this deeply rooted emotion over to the mechanical, hands-on side and ganged it with a penchant for creating one-of-one components.

“I really like second-gen Camaros, and I built this one to drive and race,” he said during an interview from his home in Batavia, Illinois. “Most of the cars I could afford needed to be fixed up so I had to learn to fix them. I had some help from friends and family but I did most of the work myself.”

His cousin came across this unloved 1973 in Missouri, but before that it had marinated for a while in an Arkansas mud bog. Certainly, it was a physical and psychological rust pit. “It almost wasn’t worth rebuilding; however, there were so many new parts available that I was able to go ahead with it. I started the project 7 years ago. I built a rotisserie from scratch and put the Camaro on it. I replaced the floors front-to-back and put in new subframe rails, rocker panels, quarter-panels, and upper cowl. I also installed the roof from a 1979 T-top Camaro and custom-fitted the DSE suspension system.” Then the car went into hibernation for 5 years. Huh.

Concurrently, Jim was running his 1968 Camaro. When he wrecked it at the 2013 Holley LS Fest, he climbed back on the ’73 the next day. Over the winter, he finished the sheetmetal and mechanicals off, did everything except the interior and the paint treatment on the hood. We asked what was the most aggravating part of the project. “The most challenging would be the lack of tools to make the build easier.”

Jim channeled his aesthetic grace to a variety of areas: He built the one-off custom Arrow and the ground effects pieces, but said that Randy Johnson of D&Z Customs in West Bend, Wisconsin, is responsible for the front spoiler and air splitter. Now here’s something out of the ordinary: Jim assembled the Anvil carbon-fiber clip (yes, nose, fenders, and hood) and went to work on it, infusing the hood flat with a custom aluminum heat extractor.

On the inside of the F-body, Jim continued his performance. He custom-made the upper and lower dash, all the interior panels, and integrated an aluminum center console of his own device. Marquez Design furnished the fiberglass door panels that Jim dissected and revamped somewhat to accept the stereo speakers. Eventually, Riggs Brothers Auto Tops & Interiors upholstered all the panels to match the stuff hugging the Corbeau buckets and the bench perch.

Since the ’73 would be doubling as a competition car, Jim gained the rigidity that was relinquished by the T-top operation from a 10-point rollcage that he built from lengths of mild steel. Adjunct to it, he put up a DSE hydroformed subframe and custom-made subframe connectors. He anchored the front suspension with C6 Corvette spindles, directed by rack steering, and fronted them with RideTech triple-adjustable coilovers and a DSE antisway bar. He continued at the back of the car, installing a 9-inch in the familiar DSE QUADRALink cradle along with the RideTech coilover damping equipment.

As for the running gear, we’re delighted that Jim continued with the do-it-yourself discipline. A six-speed manual transmission and a twin-disc clutch assembly are perfect for wrenching the most out of the Wegner Motorsports 416-cubic-inch LS3 – no overbore, just a hairy Callies Compstar crankshaft with a 4.00 inch stroke. Our chat with Casey Wegner was enlightening. He cautioned that all their engine dyno proofing is done with a Wegner accessory drive intact, so output is typically 25-30 hp less than what an unencumbered block might produce. (In the day, Detroit used to dyno its engines and rate horsepower and torque without the parasitic drag of accessories.) You’ll also notice that two critical valvetrain links, the rocker arms and roller lifters, are original equipment, mainly because the stuff behaves very well under stress.

Regardless of what else the Camaro might be saying to you, its most outstanding visual features are doubtless the red hash marks on the fenders and its mondo rim and tire combination. Tens and twelves are bitchin and who could argue with back wheels that are more than a foot deep? They are the drivers, the viable foils for the Sherwin-Williams Metallic Green. Jim did all the bodywork and applied the paint, but had someone else finish up with the clearcoats as well as the final wet-sanding. The final carbon-fiber 3M wrap was done by Greg at Sticker Dude in McHenry, Illinois.

“There are so many custom things done to this car that it is overwhelming to list them all,” said Jim. When he’s in line at an autocross exhibition we wonder if he’s thinking about that, all that waiting to come to life as he pushes the big red Start button and hears the pipes barking mellifluous but urgent. Then it’s lights out, Chief.