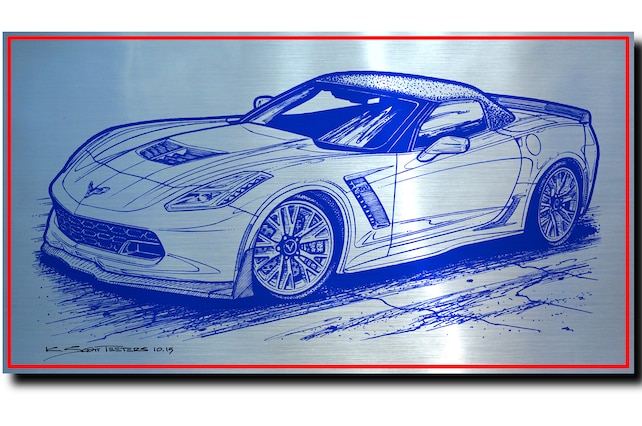 Sometimes we have to remind ourselves that all Corvettes were roadsters for the first 10 years of production. After all, when Harley Earl first conceived his Chevrolet sports car, most sports cars were open roadsters. Oh, there were coupes, but there was nothing like motoring on the open road with the top down and the wind in your hair. Ever since 1963 there’s always been a “coupe” Corvette. Roadsters went away from 1976 to 1985 but have been back ever since 1986. Convertibles are a delight, but when it comes to a modern, powerful sports car with gobs of torque and grip, a stiff structure is essential; otherwise, you have a wiggle-wagon that wants to go everywhere. The C5 Z06 model was created in 2001 because it was discovered that the bolted and bonded hardtop on the C5 roadster made the car stiffer than the coupe! For the C6 design, the aluminum frame was exclusive to the Z06 and was significantly stiffer than the coupe, so much so that the 638-horsepower LS9 was right at home in the Z06’s frame.

Meanwhile, Corvette engineers and designers are working with the C6.R racing team to help with the racing program, as well as learn how to make the C7’s aluminum frame even better! Creating a very rigid frame is usually a matter of tying the front and rear parts of the frame that cradle the car’s independent suspension together, by connecting them via the roof structure. From the start, the all-aluminum frame was designed to not only be a roadster, but a Z06 roadster. The C7’s frame is truly a work of art. The frame weighs almost 100 pounds less than the C6 steel and aluminum structure and has 57 percent more torsional stiffness.

The all-aluminum frame is an elaborate concerto of hydroformed aluminum, high-pressure die castings, extruded parts, specially designed load-bearing brackets, hollow castings, hollow-cast crossmembers, and braces, all held together with bonding material, welding, and rivets. The C6 frame was also hydroformed, but the thickness was a uniform 4-millimeters thick. The C7’s frame thickness varies depending on need, ranging from 2-millimeters to 11-millimeters thick. The C7’s framerails are designed to absorb crash energy and have special castings for firm, exact steering and suspension mounts. This is the most complicated frame to ever be used in a Corvette. The end result is a car that does not need to be in a coupe configuration in order to be as rigid as needed for a modern high-performance sports car with gobs of horsepower, torque, and tire grip – the likes of which would tear a lesser car apart in no time.

Everything else you know about the C7 Z06 coupe, you know about the roadster/convertible. All the dress-up options, aero packages, creature comforts, and luxury options are the same. The Z07 performance package includes carbon ceramic brakes, Michelin Pilot Cup tires, plus the more aggressive front splitter and rear spoiler extension. The Brembo brakes allow entering corners faster and braking harder. The Pilot Cup tires are one tick away from being “slicks” with some grooves and diagonal scribe lines and are able to connect more of the Z06’s 650 horsepower and 650 lb-ft of torque to the pavement. And the roadster, riding on its racer-derived frame structure handles it all in stride. It has not gone unnoticed that the roadster configuration should have a slight advantage on the racetrack, considering that the absence of the lift-out roof panels, B-pillar, and rear hatch and glass “should” slightly lower the car’s center-of-gravity. Imagine that, Corvette roadster racers just like the old days!

Road tests are consistent; testers that had the opportunity to drive a Z06 coupe and roadster said both cars felt the same. However, the “driving experience” is quite different. Removable roof panels are wonderful, but there’s nothing like open-air motoring. Test drivers also got to know just how loud the Z06 could be. With the top down you really hear how non-PC the Z06 can be. It ain’t no whispering Tesla Model S P85D. Another “character changer” is the choice between the seven-speed manual and eight-speed automatic transmissions. The manual seven-speed certainly rates higher on the Manly Scale. The electronic rpm-matching on downshifts makes you look like a pro in no time. But the reports are consistent, automatic versions deliver very fast shifts and an equally satisfying driving experience, although just a little different. The eight-speed automatic has a broader gear ratio range: 7.01 versus the seven-speed manual’s 6.01. The automatic’s eight speeds keep the supercharged LT4 engine right in its maximum powerband.

So what it comes down to is this. The Z06 coupe and roadster are the same, just one has a top and the other doesn’t. All options are available on both cars, and both are available with an automatic. The “convertible top” is the same as the base C7 roadster, a one-button electric configuration. First released in 2015, the Z06 coupe had a list price of $78,995 and the roadster version’s list price was $83,995. The ground effects package that included carbon-fiber front splitter and rocker panels, and larger rear spoiler costs $2,995. The serious stuff, the Z07 performance package, gets you as close to “race car” as you’re going to get. The Brembo carbon-ceramic brakes are lighter, thus reduce the Z06’s unsprung weight. Michelin Pilot Super Sport Cup tires are street legal, and track ready. And lastly, the enhanced aero package helps create more downforce than any previous ground effects package ever offered. Yes, at the top end they create a little more overall drag, but it only trims back a little of the top speed. However, road-racing cars aren’t just about long Mulsanne Straight-like, total all-out mph charge. In modern road racing, “downforce” is king and the Z07-equipped Z06 delivers. But it’s going to cost you. The 2015 Z07 package listed for $7,995. The top of the line 3LZ trim package adds another $8,650 to the bill. That puts our dream machine at around $103,635.

An interesting question is this; “Where does this end?” Depending on how much nerve you have, the Z06 roadster has a claimed top speed of over 200 mph and can accelerate to 30 mph in just 1.3 seconds and 0-60 mph in 3.0 seconds, maybe slightly less if you have the Z07 option with those gummy Michelin tires. Quarter-mile times can be in the high 10s with practice. Braking from 70-to-0 only takes 134 feet. That kind of acceleration and braking is frightening if you’re not used to it. Don’t spring this on your grandmother!

There’s already talk about a mid-cycle refresh of the C7, but as of this writing (the end of September 2015), it’s just expectation and speculation. Will there be a C7 Grand Sport? Or should the current Z06 have been the Grand Sport and the Z06 an all-out, equipped with everything, street version of the C7.R race car’s widebody? Will the mid-engine “Zora” be the next ZR1 or the C8 Corvette?

In an odd way, the higher-priced Z06 is seriously more car than most buyers want, and besides, the basic C7 is already smoking hot looking and can be tricked out right from your Chevrolet dealer. In 2014, Chevrolet sold 37,288 Corvettes and in 2015 they sold 3,048 fewer Corvettes – 34,240 cars. Those two years are better than the second and third best years for the C6 — 2006 and 2008 — and around three times the sales in 2012. I’d say the C7 model lineup has the Corvette back on track, with a bright future!