Newsletter
Sign Up today for our FREE Newsletter and get the latest articles and news delivered right to your inbox.
Home
Features 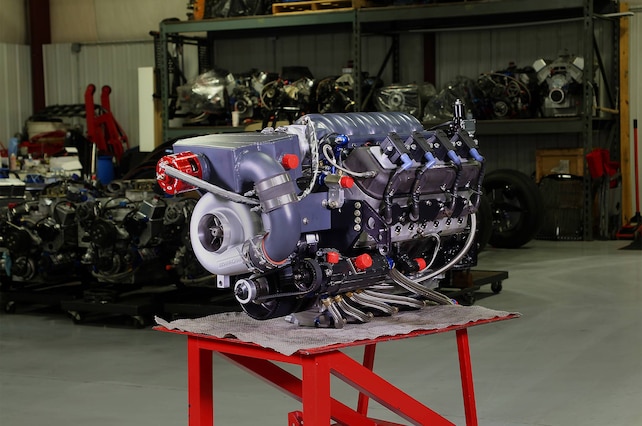 Keith Dorton made his name as an engine builder in NASCAR's big leagues—including the winning engine in the 1990 Daytona 500—but in the past few years, he's gotten into land-speed racing in a big way. His latest challenge is this SB2-based Chevy V8 that will power a 1932 Ford roadster in the E class with an engine restriction of 260 ci or less.

Given his NASCAR background, it may seem obvious that Dorton would choose to go with a Chevrolet SB2 block and cylinder heads, but he says regardless of the brand on the valve covers, the NASCAR engines that win are all practically equal. The key to winning in NASCAR is to have the greatest efficiency, and to its credit, the SB2 won a lot of races. As proof, Dorton dyno'd this little 260 a full 100 ci less than an SB2's normal displacement. It made 620 hp.

At 9.4:1, this engine was designed to be boosted. With the blower and intercooler hooked up, that number jumped to just over 1,000, which should be more than enough to break the class record with a speed of 235 mph at Bonneville. Based on Dorton's calculations, the engine needed to produce only 950 to hit that mark. "Those wide-open-throttle runs at Bonneville for several miles can be awfully tough on an engine," he explains. "So to protect the rods, we changed up the ProCharger’s drive pulleys to knock the horsepower down to 950. That should still be plenty to get the record." Unfortunately, Bonneville's 2015 Speed Week was rained out and the roadster wasn't able to make a blast on the salt. We'll have to wait until 2016 to see how this little engine pans out.

Long-Block
Many parts of this engine came off an old Hendrick Motorsports Cup car engine, but with the 260ci displacement limitation, Dorton couldn't get the bores small enough with a used block. Instead, he sourced a new SB2 iron block from Chevrolet with 4.030-inch cylinder bores. Winberg provided the custom crank with 1.850 rod journals, 2.125 mains, and a super-short 2.545-inch stroke. With that little piston movement, Dorton could cram in 6.350-inch rods from Carrillo. Custom Mahle pistons with 0.027/1mm/2mm rings seal the holes.

Heads and Valvetrain
The heads are a used set of SB2 NASCAR Cup heads that Dorton says were last raced six or seven years ago. Even with tiny 34cc combustion chambers, the short stroke only generates a paltry 9.4:1 compression ratio. But that's also why this combination works so well with forced induction. Though Dorton prefers to keep the specs a secret, he would admit the cam is a solid roller from Crane that generates nearly 0.800-inch lift. The valvetrain is anchored by the shaft rockers designed to go with these heads by Hendrick Motorsports. PSI made the valvesprings and the titanium Xceldyne intake valves measure 2.180 inches, and 1.580-inch Inconel valves by Del West manage the exhaust.

Intake
Wilson Manifolds had developed this LS-style billet-aluminum intake for a customer who was trying to build SB2 engines for street use. The SB2 architecture doesn't lend itself well to low-rpm street driving, so we aren't surprised that the notion never really caught on with hot rodders. However, it's a great option for a forced-induction, top-speed race engine. Plus, getting everything to fit underneath the hood was also an issue, and this style of intake made packaging much easier. Wilson also fabricated the throttle-body.

Forced Induction
Dorton sourced ProCharger's F-1A unit, the smallest they make, Just 10 pounds of boost are required to make an astounding 1,000 hp. Dorton had to fabricate much of the bracketry and mounts to get everything to fit, and New Era Racecraft helped spec out the drive system.

Intercooler
Aerodynamics are critical when you’re trying to exceed 230 mph on salt, so absolutely nothing was allowed to stick out of the hood or sides. Dorton fabricated the largest intercooler housing he could in the only place it would fit: just above the body of the supercharger. Chiseled Performance built the a custom air-to-water intercooler to fit the space. A large icebox mounted in the cockpit cools the water. You may also notice the interesting gray color on the intercooler, fuel rails, and intake manifold. That's not paint, it's a protective coating Dorton had applied to help keep salt from corroding the aluminum.

Engine Management
Holley’s Dominator ECU was chosen because of its flexibility and ability to monitor practically anything the engine builder wants. Dorton has it tracking exhaust gas temperature at each cylinder as well as O2 levels in both banks to allow for individual cylinder tuning. The team also uses traction control to help maximize acceleration on the salt, and the Dominator system has no issue working with it. Finally, Holley’s ECU is flexible enough to allow multiple profiles so that Dorton can potentially drop the ProCharger system and run naturally aspirated without having to reinvent the entire system.

Lubrication
The external oil pump, dry-sump oil pan, and associated plumbing is all used Cup car technology. For years Hendrick Motorsports kept its segmented billet oil pans top secret, but now that they have moved on to the R07 engine architecture, the SB2 is old news. For us, however, it's still insanely cool. You can't see it, but baffles inside the pan fit tightly around each main cap to seal each segment of the engine, allowing the oil pump to pull vacuum more efficiently.

Ignition
SB2 engines are designed to work with an alternator and single coil, but the Dominator ECU makes it easy to adjust ignition timing for each cylinder, so Dorton plugged the distributor hole and developed a system to use individual coils from Holley. Besides being able to improve combustion efficiency by individually tailoring the spark timing for each cylinder, eight separate coils provide a hotter spark to each plug, which can be invaluable for a supercharged engine.