Altamont Cruiser: This 572-Powered ’55 Appeared in a Fog of Burning Rubber 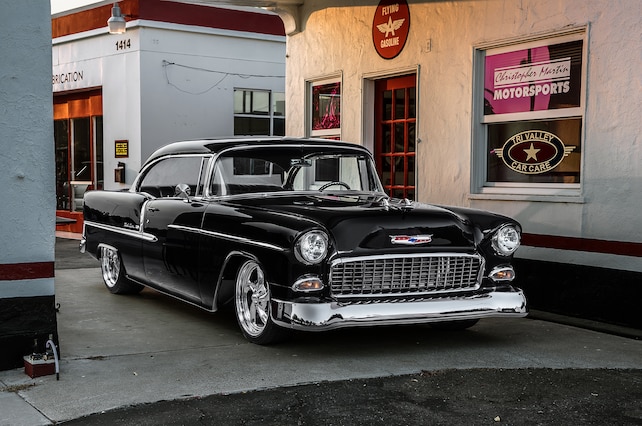 There must be at least 31 different flavors when it comes to choosing how to build a car. On the extreme opposite end of trailer queens and the pampered life those cars live, plugged into battery tenders and riding in climate-controlled enclosed trailers, there’s the show cars that get the their wheels run off. A great example of a guy that owns a slew of super neat cars and enjoys them all right down to the rubber nubs left clinging to the rear wheels is George Barby of Livermore, California.

On the day of the photo shoot, the first indication George and his ZZ572-powered ’55 Chevy were about to arrive was the sound of a screaming engine emerging from a fog of burning rubber. From George’s first car, a 1969 Pontiac GTO he bought at 17 years old with paper route money, it’s always been about enjoying a badass ride. George still owns the ’69 Goat to this day, and said it’s still running the over-the-top nasty engine he built for it about two wives ago.

There’s a string of very interesting rides in George’s fleet, including two split-window Corvettes, a ’47 Dodge Power Wagon, a ’48 GMC COE, more Corvettes, a Harley-Davidson, and on it goes, but our focus here is the ’55 Chevy Bel Air George bought from the guy that bought it from builder Scott Dempsey.

By trade, Scott Dempsey has been doing vinyl graphics at Trimline, his Fort Lauderdale, Florida, shop for over 30 years, but when Scott gets home its all about building a custom car or motorcycle from the ground up in his two car garage.

Scott ditched the ’55 Bel Air’s original frame and opted for a Morrison GT-Sport Chassis engineered for a competent DIY guy or a pro builder to install under a 1955-’57 Chevrolet. A lot of the time-consuming steps such as plumbing or fabricating exhaust, or determining where brackets need to go on a one-off build have been solved by AME (Art Morrison Enterprises). The end result is years can be cut off from the time it takes to complete a scratch build, and it’s a proven fact the car is going to handle right.

In front, the AME independent front suspension consists of tubular upper and lower control arms, damped with Strange coilover shocks. George upgraded the brakes shortly after he bought the ’55 with Wilwood six-piston calipers and 14-inch rotors in front and Wilwood four-piston calipers and 14-inch disc brakes in the rear. For power brakes, a Hydratech hydraulic brake assist system is in place to eliminate sweating whether or not the engine is producing enough vacuum. Quicker steering over the Tri-Five’s famously sloppy original recirculating ball steering box is thanks to an AGR power steering rack-and-pinion setup. To keep the ’55 flat while George pitches it sideways and burns the tires off, there’s front and rear heavy-duty swaybars. The swaybars also come in handy for high-speed friskiness on Northern California’s winding backroads.

Car builder Scott Dempsey’s selection of an AME GT-Sport chassis with its available options was part of a well thought out time saving plan that carried under the hood by specifying a Chevrolet Performance ZZ572 for the powerplant. For spark, an MSD distributor handles the ignition, and an 1,150-cfm Dominator carb pours in the required 110-octane race gas. A prerequisite for any big-block install into an AME Tri-Five chassis, the firewall received modifications to provide clearance for the fire-breathing ZZ572. Spent exhaust leaves the engine through a pair of AME stainless steel headers, flowing into polished 2 1/2-inch stainless steel exhaust pipes and on through a pair of MagnaFlow stainless steel mufflers.

George’s engine is the 720-horsepower ZZ572/720R, which has a 12.0:1 compression ratio, so cooling the ultimate dual-purpose car takes place with a PRC radiator with dual 12-inch SPAL fans plus a PRC A/C condenser to exchange heat for the Vintage Air air-conditioning. A Billet Specialties’ Tru Trac serpentine belt conversion kit handles all the chores of driving a power steering pump, air-conditioning compressor, alternator, and aluminum short-style water pump.

The transmission behind George’s ZZ572 is a beefed 700-R4 with a 3,500-stall Hughes converter built by ATF of Davie, Florida. Shifting takes place using a Retro Tek paddle shifter.

Like the radical ZZ572 drivetrain, to keep the over-the-top theme going, the interior and exterior of George’s ’55 were executed one step beyond as well. The ’55’s interior work was performed by A.J. Gisonda’s Street Seats in New Port Richey, Florida, and black leather was combined with suede. Incorporated into the leather upholstery there’s a 3,800-watt sound system based around an Alpine CDA-9886 head unit, amplified with two JL Audio amps feeding an assortment of MB Quartz speakers, including a massive sub.

For climate control, a necessary consideration for a black-on-black car, ice-cold A/C comes from Vintage Air. In front of the Flaming River tilt steering column, the black package Bel Era dash cluster from Classic Instruments not only adds a tasty touch in the looks department, but CI’s accurate instrumentation keeps close account of the ZZ572 and all the systems supporting it.

The hardest color to get the bodywork right under is pure black. Black reveals every little imperfection other colors hide, and black’s exactly the color Luke at Exotica Body Works in Davie, Florida, shot the ’55 in. As a rule, Exotica specializes in European exotics and luxury cars, but in the same way as the Ferrari Enzos and Mercedes Gullwings they’ve refinished, the ’55 was sprayed using Axalta’s German paint brand, Standox.

We all do, but the square world might not understand George’s propensity for roasting the tires off his ’55 every chance he gets. This inclination doesn’t make George a bad man. To the contrary; George and his wife, Heather, are members of the Altamont Cruisers, a car club that’s out to do some good in the world, and we’d say that’s a redeeming quality.