A 1968 Chevrolet Nova Street Car that Does It All 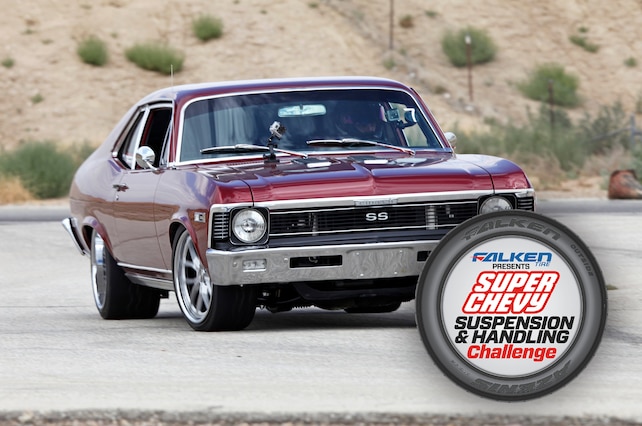 Speed Tech’s entry into the 2015 Super Chevy Suspension & Handling Challenge presented by Falken Tire stood out from the field of eight cars for one simple reason; even though it was a Chevy II/Nova, it was the only later-gen Nova in attendance being a 1968 (the last year of the Chevy II moniker). It was also not built as a race car in disguise as a street car, but rather what a Pro Touring car was always meant to be, a car that’s nice to cruise but also one that has modern handling prowess.

Unlike last year, this time Speed Tech brought one of their customer’s cars to the Challenge, which shows a lot of confidence on their part and a lot of trust from the car’s owner, Bentley Hugie. As Speed Tech’s Blake Foster told us, “Bentley is the owner of H&S Performance. They build diesel tuners and sell performance parts here in St. George, Utah, and their shop is just a block down the street from our place. He purchased the car locally and it was a driving, finished car but it had a lot of issues. The reason he purchased the Nova was because his dad had one that was the same color when he was a kid.”

The car came into Speed Tech for a simple control arm swap; but, as is often the case, the project soon snowballed into much more. “After Hugie drove our black Nova, ResurreXion, he got really excited about the project and decided to go all in. We mini-tubbed the car, narrowed the 12-bolt and upgraded the axles with 9-inch Ford ends, and Wilwood six-piston brakes. The front subframe was in good shape, and since he wanted the car more for cruising than racing we opted to install our Grand Touring package,” explained Foster.

Up front, the GM subframe was modified with their Chicane coilover conversion kit and fitted with upper and lower tubular control arms, billet tie-rod sleeves, a 1 1/8-inch chrome-moly sway bar, and Viking double-adjustable shocks. The old leaf spring rear suspension was ditched in favor of Speed Tech’s torque arm system and another pair of Viking shocks. The steering was also addressed by the move to a power rack-and-pinion system. It’s a slick setup that simply bolts to the subframe and it’s designed to have virtually no bumpsteer. Getting a rack-and-pinion system to bolt onto a vintage subframe and not have steering issues is no small task and the price point of their kit ends up much cheaper than buying an aftermarket rack-and-pinion–equipped subframe. The complete suspension was a bold-in deal with the exception of one bracket for the torque arm system. Rounding out the chassis modifications are six-piston/13-inch front and four-piston/12.75-inch rear Wilwood disc brakes.

Cruising was in the script so a mild-mannered, yet plenty potent, 525hp LS3 Chevrolet Performance crate engine fitted with an Eddie Motorsports billet drive system and Speed Tech headers was dropped between the fenders. The engine is backed up by a Tremec six-speed Magnum that spins the power back to the Strange-equipped, 3.73-geared GM 12-bolt.

The combination of parts makes for a street car that’s fun to drive around town, yet capable of hitting a few track events. As Foster summarized “I think the most impressive part is how well the car did with a stock subframe and 245 front tires! The car is a great example of what Pro Touring, as opposed to Pro Race, cars are supposed to be.”

According to Speed Tech they’ve only driven this Nova about 200 miles. To me that seemed just plain wrong since from all appearances this ’68 Nova was just about perfect. Blake Foster from Speed Tech convinced, er… pleaded and begged, his customer and owner of this remarkable car, Bentley Hugie, to bring it to our little soiree and no one was more pleased than I. Bentley bought the car about three years ago as a reminder of fun times in earlier years. The car needed some work and as Bentley’s business is a stone’s throw from Speed Tech, some consultation provided direction on the build.

I must admit I was dubious when I took a closer look at the Nova and saw the disparity between the front and rear tire sizes as a 245/315 difference is a sure recipe for understeer. Never form a prior opinion, they say; so I put that thought aside and promptly forgot about it.

As far as that tire size difference … well, no one apparently told the car this was a bad thing as it stuck like a tick! Handling was absolutely spot-on as the car was so easy to compress into a corner. It was trustable and gave a confident “hero” feel, and I finally was able to realize just how developed this suspension is with that awesome torque arm handling the load. From corner-entry to track-out, the car went where it was pointed and enabled me to focus on the upcoming turns and proper driving lines to get there. On my cool-down “street test” lap, there was no difference in ride quality and this is a car whose bits all work together in harmony with many shades of grey for driving possibilities. Power wasn’t over the moon but more than adequate and it fit well with the overall balance and harmony. Plus, the interior had great ergonomics and the seat, steering wheel, and pedal assembly fit me like a glove.

My only complaint had to do with a tiny bit of unexpected brake pedal knock-back. The pedal was there but lower than I’d like, and I found myself delivering a “pre-brake” test before some of the faster-entry corners. I also didn’t push this car as hard as I could have on the straights as I was unsure of the brakes being home when I rang the bell. Along with the brakes was a worn power steering pump as this provided me with some music during my drive. Noises aside, the steering functioned fine throughout the track laps. Fix these two things and I’d give this a perfect 10.

I can guarantee if this Nova was in my garage, it would be driven … a lot. Of all the cars I’ve threaded through cones and apex-clipped as part of the Super Chevy Suspension & Handling Challenges held over the past eight years, this car is in my top three of all time, as it meets the criteria for all of my needs. Whether it’s cruising the pleasure lanes on Highway 1 or sliding around an end-sweeper at a local autocross, this car’s got it all going on.

We put Speed Tech’s Nova through the wringer on the 420-foot slalom course, the Streets of Willow Springs road course, and the skidpad. And, because some of those numbers are a little ambiguous for those not familiar with the slalom or road course, we paired the car against a 2015 Camaro SS 1LE (which is their Track Pack) for comparison. The Nova squeaked past the 1LE in the slalom test but the 1LE’s mix of high-tech gadgetry gave it an edge in the other tests. Still, for a 47-year-old Chevy running bolt-on suspension parts Speed Tech’s ride did its owner proud.

Check out this 1968 Chevrolet Nova that has a small-block 350ci backed by a 700-R4 transmission. Read more only at www.chevyhiperformance.com, the official website for Chevy High Performance Magazine!

Check out this 1968 Chevrolet Nova that has a 5.3 LS engine, Corvette LS6 intake, and more. Read more only at www.chevyhiperformance.com, the official website for Chevy High Performance Magazine!

Our exhaust system on our 1968 Chevy Nova has taken a beating due to a broken driveshaft at 5,600 rpm, so we just had to gain the power back with Hooker Headers Competion headers and with a Summit Racing exhaust system.

A '69 Nova has its' old factory parts replaced with CPP's suspension kit, giving it better handling from Super Chevy Magazine.

This 1968 Chevy SS 350 Nova is just one of two awesome muscle cars. The owner had to sell this road machine for a Ford Pint... Check out the pictures and details at Super Chevy Magazine

Due to another major car show in the area, the 2007 Super Chevy Indy attendance has been split right down the middle, but that meant the show car was light while the drag cars were heavy. - Super Chevy Magazine