A 1963 Chevrolet Nova Muscle Car for the Street and Track

Upward Mobility: Church Boys Racing’s 1963 Nova is Their Best yet. 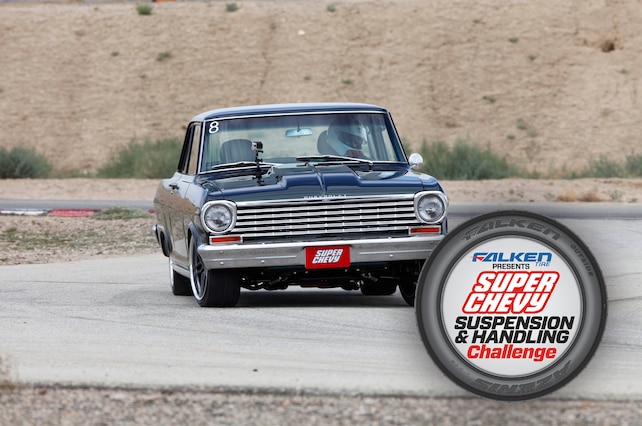 Some rides are recent endeavors, bought and then immediately put into project-car status. Other rides, like the 1963 Nova fielded by Church Boys Racing at this year’s Super Chevy Suspension & Handling Challenge, presented by Falken Tire, have a long and storied history of evolution behind them. As Chuck Church Jr. recalled, “My dad, Chuck Church Sr., graduated high school in 1969 and married my mom, Cindy, that same year. Soon after, he enlisted in the Air Force and was stationed in Tucson, Arizona. They bought a 1963 four-door Nova and drove it from Ohio to Tucson in 1970 and it served as their daily driver until my dad found this two-door 1963 Nova. Since the four-door was in great shape, all of the good, transferable, parts from the four-door went onto the two-door and it became the daily driver.” Chuck Jr. was born in 1971 and in 1974 the family drove back to Ohio in the 1963 two-door, which was now sporting a 283 V-8 and a Muncie four-speed.

Soon the Nova was parked, where it sat for 20 years before the elder Church pulled it out and got it back on the road. During the next 10 years the Nova cruised and ran at the local dragstrips. In 2006, it received its current paintjob by family friend Scott Fury, and we were pretty impressed at how great it still looks even after 10 years of street duty.

Church Jr. went on to explain, “Prior to the event, Dad’s car sported 15-inch Cragars with Mickey Thompson tires. It sat too high and was annoying to drive. When I decided to bring this car to the challenge, I knew it was time the Nova got some upgrades. In came the Billet Specialties 18-inch wheels, big Wilwood brakes, new front and rear suspension, and manageable gears for the Moser rearend. The interior was stuck in the old days, which is what my dad likes, but I managed to convince him to ditch the 1970 Camaro seats in favor of some much more comfortable, full power, ’06 GTO seats.”

The front suspension on the Nova was worked over with a host of products from the Church Boys catalog. The stock upper arms gave way to a pair of their tubular control arms. According to Church Boys, these arms greatly improve camber gain to keep the wheels firmly pressed to the pavement, which helps handling and prevents uneven tire wear. This allows for a 1/2-inch gain in the front fender lip clearance. Fitted with billet cross-shafts, adjustable Teflon-lined chromoly rod ends, and adjustable upper ball joints, these arms are compatible with coilover systems like the double-adjustable Viking shocks the car was running in the challenge. The lower tubular arms are light years ahead of the stock stuff and feature heavy-duty, three-piece RSMX series rod ends with self-lubricating Teflon liners. These arms also make the alignment process simpler due to their Link Adjuster, which allows camber and caster adjustments to be made separately. Rounding out the front suspension are a pair of AFX spindles teamed with modern Corvette bearing hubs. In addition, the original steering box was tossed and replaced with Church Boys’ rack-and-pinion conversion kit.

The rear suspension consists of their new triangulated “Tri-4” four-link suspension. A side benefit of this kit is that it frees up the entire stock wheelwell for larger tires and it can allow for even larger rollers if you decide go with a mini-tub. The triangulated four-link means there’s no need for a Panhard rod, which makes installing an exhaust system much easier. This kit does require a bit of welding, but since it can be installed with the old leaf springs still in place (properly locating the rear) it’s a pretty straightforward project. Like the front, the rear was also equipped with a pair of double-adjustable Viking shocks. The rear was also fitted with a 3/4-inch sway bar to help control body roll. The Billet Specialties wheels are shod in 235/40/18 and 255/40/18 Falken Azenis rubber.

In a world of modern LS mills and stroker small-blocks, this Nova came to the party wielding something a bit more traditional. As Church Jr. told us, “The 327 (bored out to a 336) in the car has well over 500 hard quarter-mile drag passes on it. This engine used to be in my 1967 Nova, which ran high 11s. I was pleased to see that our Entropy radiator kept this old mill, sporting 1965 double-hump 461 heads, cool in the 100-degree temps!” Backing up the small-block was a TH350 automatic trans.

Put it all together and the result is a sweet early Nova with all of the style and none of the sketchy handling commonly associated with these cars. In closing, Church Jr. relayed “Dad and Mom now drive the car a lot more than they used to before the upgrades. It looks better and is actually a pleasure to drive. I love seeing them enjoy the car they’ve had for so long. I can honestly say this little Nova is what started the Nova thing for me!” To be honest, it makes us want to get one as well.

During my preliminary interview, I quickly realized just how special this little ’63 was to the entire Church family, as this was the car that started it all. The love of the Chevy IIs and Novas formed the creation of a business dedicated solely to them and was merely the beginning. When you have a car in the family for over 45 years — that says a lot. Talking with Chuck Sr. brought out the passion, the love, and the emotion that only a “forever car” can offer up. Over the years it served as a daily driver and provided a donor body for the first Nova bought way back when Chuck Sr. was a pup in high school. While the underpinnings and drivetrain have evolved over these same years, the body and color have remained the same.

I asked Church Boys Racing founder, Chuck Sr., about that “one thing” that personifies this car and he told me that it’s when people come up to him at shows and say, “You know, I owned one like yours and sure wish I still had it.” Well, guess what? Chuck Sr. still does!

As Church Boys devotes their attention strictly to the X-body platform, they realized the limitations, and potentials, of each and every build. If you want all the bits to do their happy dance, keep the build conservative — especially so when selecting an engine. Yes, LS power is king and a larger hp/torque number is impressive, but Chuck Sr. chose something a bit smaller, a mildly built 327ci small-block backed by another basic, the TH350. Completing the drivetrain package is a Moser 12-bolt with 3.55 gear ratio.

My driving impressions were exactly what I’d imagined, as the little Nova exhibited great power and traction for a “small-tire’d” car. Yes, rubber rules on the big track and faster autocross courses, but what’s so cool about a small-tire’d car is you can get frisky and stretch traction like a loooong pull of your favorite flavor of salt water taffy.

A car like this doesn’t bite, it nibbles gently at the limits of traction and allows me the luxury of working my way into and out of corners, and down the straights. I loved the brakes and no matter how hard I pressed that pedal, no fade was ever encountered. The shock settings appeared fine and the car exhibited no bounciness or the opposite, roughness or jacking, on the bumpy sections of the track. Overall, the car was pretty easy to drive once I met, then dealt with, slower than desired steering.

The suspension build of this particular Nova exceeds my expectations for a car that will be street driven and enjoyed as a pleasure vehicle. The ride was compliant and my cool-down “road evaluation” at a slower speed found me back in pleasure mode with a grin from ear-to-ear. Church Boys Racing brought yet another superstar for our testing and consideration, and overall, this car was a joy to drive.

We put the Church Boys Racing Nova through the wringer on the 420-foot slalom course, the Streets of Willow Springs road course, and the skidpad. And, because some of those numbers are a little ambiguous for those not familiar with the slalom or road course, we paired the car against a 2015 Camaro SS 1LE (which is GM’s Track Pack) for comparison. The Nova stayed near the 1LE in the slalom and skidpad tests, but the 1LE’s mix of high-tech wonders like stability control and ABS pushed it ahead on the road course. Overall the little Nova put down strong numbers considering how bad a stock early Nova is when it comes to anything handling related.