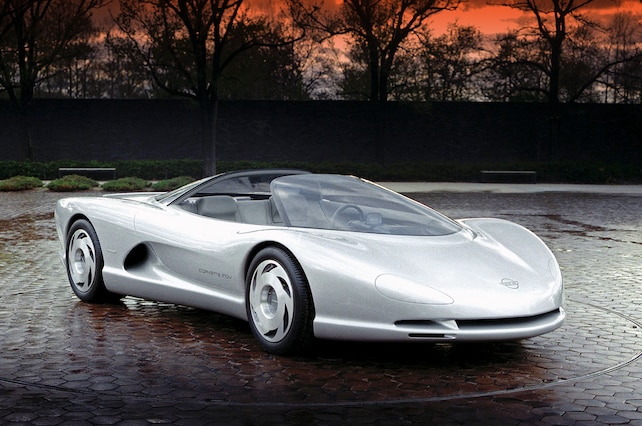 The lead-time needed to design a car can be considerable. Often, designers start the next generation of a car shortly after a new design is released for production. With rave reviews coming in for the new C4 Corvette (yes, in 1984 and 1985 the new C4 was hailed as “The best Vette yet!”), it was time to think ahead … way ahead.

In the early 1980s, Chevrolet engineers worked on a 2.65-liter IndyCar engine with twin-intercooled turbos. The engine was never seriously raced, but its development stimulated many of the Corvette team designers. Also, computer chips and electronics were making inroads in production cars. GM’s Design Vice President Chuck Jordan wanted these new technologies to be integrated into the design of the next-generation Corvette. Jordan began with a rendering from staff designer Tom Peters. The design hearkened back to the Italian-like shapes from the Bill Mitchell era. Jordan took the Peters rendering and “on paper” stuffed as much technology as he could into the sleek new shape.

The Corvette Indy Concept was another in a long line of mid-engine Corvettes. Other proposed “gee-whiz” features included active suspension, traction control, drive-by-wire steering, all-wheel-drive, ETAK navigation system, and four-wheel steering. The “Indy” name was used because the new car would have a 265-cid street-version of Chevrolet’s IndyCar racing engine.

To take the rendering to the next stage, a show car model needed to be built. Jordan commissioned Cecomp of Turin, Italy, a workshop that built most of the show cars for nearly all of the top Italian design companies, to build a fullsize clay model of the Peters design. It was the three-dimensional, fullsize model that would take the design to the next level of a running prototype. Around the same time, GM had purchased Lotus, so the fullsize model was sent to Lotus for evaluation.

Chuck Jordan’s nickname was “the Chrome Cobra” because he was extremely creative, bright, and competitive, with a habit of taking advantage of any perceived weakness – “striking” like a cobra. When the clay model arrived at Lotus, Peter Stevens, the lead Lotus design engineer was told by Jordan that nothing could be changed on the car, nothing! As delivered, the Corvette Indy model had a roof section. It turned out that because the cabin roof tilted in so severely, even Chuck Jordan could not sit in the driver’s seat with the doors closed! Concept cars are one thing, real cars are another. The solution was to show the car as an open roadster.

The overall shape of the Corvette Indy was bigger than a production Corvette in every way except the height. The Corvette Indy was 7 inches shorter than a stock Corvette, but 10.4 inches longer and 8 inches wider. The wheelbase was 1.7 inches longer, with the front track 4.5 inches and rear track 5.4 inches wider that a stock Corvette. When viewed by itself, the car looks large, but when seen next to a production Corvette, looks smaller due to its low height. The mid-engine drivetrain layout mandates a cab-forward shape, with the exotic engine visible through the rear window. Deep air intakes behind the doors and the inverted rear spoiler are similar to many LeMans-type racers of that time. The rear spoiler shape would later be used on the ’93 Camaro. When the Corvette Indy was first shown it was silver with silver/gray interior. Later, it was painted red with a black B-pillar. As swoopy and sleek as the car looked, when the Lotus engineers put the car into the wind tunnel, they reported that the front-end lift was so great that it could have flown. Have we ever heard this before with Corvettes? Lotus’ Peter Stevens reported, “After many hours in the wind tunnel we achieved a reasonable aero performance for a car that could potentially reach 200 mph!”

Clay prototypes are usually about 25 percent “too much” and have to be scaled back, but the model impressed GM officials. By the end of 1986, the first of two running Corvette Indy cars was delivered, with the second car being completed in 1987. The running prototypes and the CERV III were developed at the same time.

1986 Chevrolet Corvette - May The Downforce Be With You

How to restore your Corvette's glovebox

Read about how Eddie Paul reluctantly installs a Flowmaster to his 1986 Chevrolet Corvette, and is pleasantly surprised with the ease and results. - Corvette Fever Magazine

The beginning of Jim's "C4.5" project looked more like the end of the line for a certain '86 Corvette coupe. Jim was hard at work one Saturday morning in 1996 when a couple came in, looking for a Corvette to buy. They explained that their '86 had been demolished by a semi-truck on California's Highway 101. Check out more of this c4.5 at Vette Magazine.

ABS brakes are a complex but valuable asset to the Corvette driver. As with many complex systems, they require some attention from time to time. The system is designed to give