Showtime: The Roadster Shop Finds a Way To Make a 2014 Camaro ZL1 Even Better 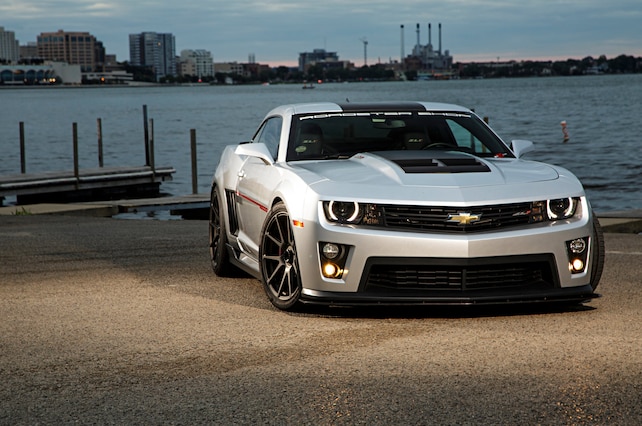 It’s always fascinating how some cars come about. The Roadster Shop is known for churning out some of the baddest and hottest performing customs in the country. But typically, the cars they transform fall into the “classic” category. A couple of years ago they were invited to partake in a GM SEMA car program. A rendering was submitted of a fifth-gen and ultimately GM chose them to “work over” a brand-new ZL1 Camaro. As Roadster Shop’s Phil Gerber told us, “We wanted to take a car that was regularly customized today and give it a new twist that we hadn’t seen before. There are a lot of bolt-on parts available for fifth-gens, but they only go so far. We saw other areas for enhancement and had different ideas when it came to commonly customized areas like the rear spoiler and rockers.” But they wanted the car to perform as well as it looked so they hit up some of the best parts companies in the country.

Roadster Shop rolled with the modern vibe of the 2014 ZL1 by extensively using matte carbon fiber in the build. This included the front splitter, carbon roof panel, and carbon trunk lid. There were other items they wanted to address, not available through the aftermarket, so Roadster Shop made their own. Custom touches like carbon-fiber quarter inserts, fabricated aluminum side rocker trim, aluminum rear low-profile air gap spoiler, one-off billet ZL1 emblems, and custom graphics were just a few of their subtle, yet striking, changes.

For suspension, the already capable ZL1 chassis was supplemented with double-adjustable Penske coilovers, which help drop the stance 1.5 inches, teamed with Hyperco springs. The brakes were swapped over to a Brembo Gran Turismo kit with Type 3 rotors and monoblock 6- and 4-piston calipers. Rolling around these upgraded binders are a set of monoblock, matte-bronze Forgeline GA1R 20-inch front and 21-inch rear wheels wrapped in Pirelli P Zero Rosso 275/25 and 295/35 rubber.

The engine may look fairly stock, but it was worked over as well with a Lingenfelter 630hp performance package, which included a 2.55-inch blower pulley (taking boost to 12 psi), ECM re-program, and a high-flow air intake to feed the beast plenty of atmosphere.

The Camaro took two months to transform and debuted at the 2014 SEMA Show in Vegas where it garnered quite a bit of attention. Since then they’ve run it at several of the Optima Ultimate Street Car track events as well numerous autocross races. It’s nice to know that what started out as a show car is tearing up the asphalt the way GM intended.