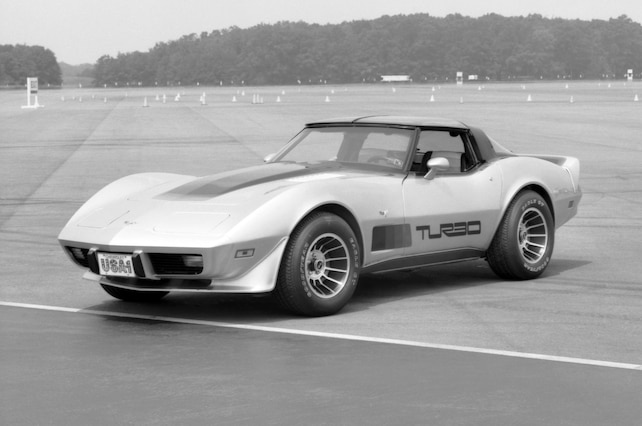 “Supercharging” goes all the way back to 1860 when the Roots brothers patented a device to increase the amount of air injected into a blast furnace. The turbocharger was patented in 1905 by Swiss engineer Alfred Buchi and first appeared on French World War I airplanes. In 1918, General Electric used a turbocharger on their V-12 Liberty aircraft engine, proving the system’s ability to compensate for low air pressure at high altitudes. GE coined the expression, “Turbosupercharging.” The first turbocharged cars were built by GM and were options on the 1962-’63 Oldsmobile F85/Cutlass and the 1962-’64 Corvair Monza and 1965-’66 Corvair Corsa. But GM learned that a bigger engine was the easy way to big power, and turbocharging was history. That is, until the horsepower party came to a screeching halt in the early 1970s.

Between insurance rates and exhaust emissions, “performance” quickly became a dirty word. And when the 1973 Arab Oil Embargo hit, it was R.I.P. performance cars. Fortunately, because the Corvette had a strong following and was selling better than ever, the Corvette was a survivor. But Corvette designers and engineers hadn’t given up on performance.

The first turbocharged Corvette was never shown to the public. In 1978, Gib Hufstader built a turbo system that used a Holley carburetor inside a pressurized box. All of the linkages and shafts had to be sealed, otherwise gasoline would blow out all over. When the system worked, it was a tire burner, but ultimately the car caught fire and burned to the ground!

The 1979, “Phase II” Turbo Vette used a modified L82 with a milder L48 camshaft, and an AIResearch T3 turbocharger controlled by a wastegate with 7 psi of boost through a Rochester throttle-body injection system. This setup used a Delco controller for ignition timing and a knock sensor from Buick. Chief Engineer Dave McLellan felt that because of the lack of a sophisticated spark and fuel management system, the setup wasn’t ready. To run right, the car needed a steady diet of 103-octane gas.

However, the silver Phase II car looked “production.” The hood sported louvered air vents on both sides of the hood dome and mild pinstriping on the hood, front spoiler, around the wheel openings, along the side windows, and around the rear glass. A second version had a wild graphic treatment. The raised dome of the hood was burgundy that wrapped around the top of the doors, B-pillar, and rear deck. The color break between the burgundy upper stripe and silver body color had thin red and orange stripes. Recaro seats were black with yellow, orange, red, and burgundy transverse stripes. Turbine-style wheels were shod with fat Goodyear Eagle GT tires. Many called it garish. A few magazines tested the car and were disappointed that it wasn’t that much quicker than a stock Corvette. With 280 - 290 hp on tap, it should have been a good ride. Perhaps they had unrealistic expectations. Another combination was tried using a turbocharged V-6. The idea was that the V-6 would improve gas mileage and the turbo would pick up the missing cubic inches. But the concept went over like a belch in church!

A third turbo car, called the “Turbo Vette 3,” was the most refined of the turbo Vettes. For this experimental, Chevy engineers used an all-aluminum 350 engine with an AIResearch turbocharger, an integrated wastegate that limited boost to 7 psi, and throttle-body fuel injection. The throttle-body fuel-injection (TBI) system was the key component. The TBI used the old ’69 Z/28 dual-quad 302 racing intake manifold with two simple injectors replacing the carbs. This system went into production on the 1982 and 1984 Corvette. For its day, and considering the minimal electronic and computer control nature of the setup, the turbocharged TBI system yielded a nice 30 percent bump in power. The 1981 L81 was rated at 190 hp, so we’re looking at possibly as much as 250 hp, maximum – that’s back to 1974 L82 level.

The exterior of the car was stock, except for the pearlescent white paint, blue stripe graphics, and aftermarket wheels. The stripe pattern was similar to the Phase II car except that the raised dome on the ’81’s hood was the pearl white body color and the surrounding top surface of the hood was medium-dark blue trimmed with an outer band of light blue that wrapped along the top edges of the doors and back across the rear deck. The B-pillar and roof were the medium-dark blue and on the rear deck the medium-dark blue covered the right and left side, leaving a wide pearl white section in the middle. On the side fenders, coming out of the vents was a medium-dark blue stripe, trimmed in light blue, with “TURBO VETTE 3” light blue lettering. Like the Phase II Turbo Corvette, the look was definitely in the “garish” range. A preview feature was the hatchback rear glass that would be part of the 1982 Collectors Edition.

“Timing is everything,” but at least Chevrolet tried. A turbocharged Corvette option didn’t arrive until the $19,995, B2K 1987 Callaway Twin Turbo. Had computer chips and throttle bodies come online sooner, there may well have been a “turbo” option by the late ’70s.