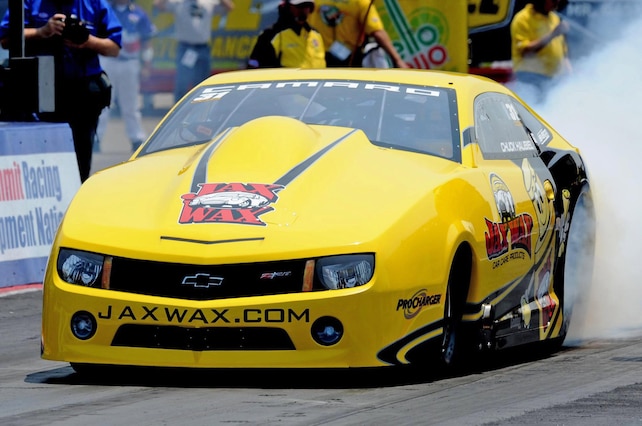 Haubiel, a lawyer by profession based out of Columbus, Ohio, unveiled his awesome-looking and sounding ProCharger supercharged 2014 Camaro during mid 2015. At first glance, the car, which was expertly built by Tennessee’s Darren Breaud (B&B Race Cars), could be mistaken by some as a retrofitted Pro Stocker, but that is not the case. It was specifically purpose-built for the CC/A category.

This car oozes with safety technology, according to Haubiel, employing the absolute epitome on that important front.

“Right from the start, everything on this car was built around safety,” Chuck emphasized. “The car’s chassis is 25.3 from top to bottom and front to back, made from 2-inch solid billet aluminum. The car is also extremely lightweight. In fact, the body (built by Five Star) including decklid, doors, dash, nose, and wing all together weighs only 47 pounds! For this project I really wanted to build something different and new that was also very safe. I think that was accomplished on all fronts.”

Haubiel also employs a very unique and powerful engine program. At only 375 ci (with the ProCharger) this billet-blocked Chevrolet has been dyno’d at 2,645 hp!

“In NHRA Division 3, I think we have the baddest group of Comp cars in the nation,” Chuck continued. “So I needed something very fast and reliable. I used to race a Chevy Cobalt, but this car pulls so much harder from 150 to 900 feet compared to that car (which was supercharged with a five-speed). It’s like night and day!”

The race car’s precision immediately captured the attention of NHRA’s technical inspectors, too. In fact, the car received the overall and prestigious Excellence in Engineering award during it’s debut national event race at the Summit Racing Equipment Nationals in Norwalk, Ohio, in early July.

Chuck’s team is rounded out by his wife, Michelle; Tim Ratcliff; and “Big D” (Darren) and his son Grant Breaud.