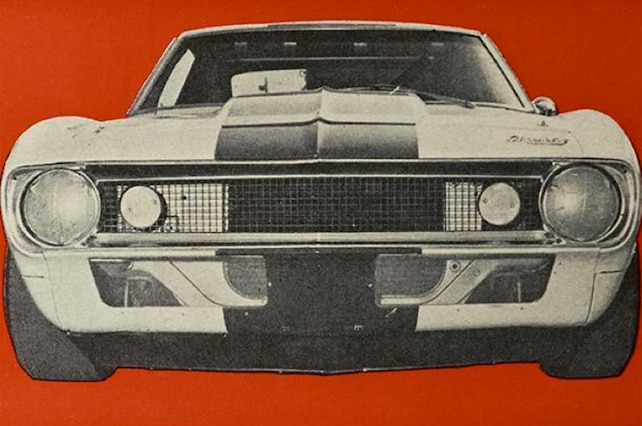 It’s been said that when it comes to researching the history of any given subject the most trusted source is often a publication from back in that time. Take, for example, the following story we’re presenting on the 1967 Camaro students at Chaffey College in Alta Loma, California, prepared to compete in Trans-Am at Riverside Raceway in 1970.

The first word of this intriguing project appeared in the June 1969 issue of Hot Rod magazine when then editor Don Evans devoted his editorial to discussing the new race car technology course that was being offered by Chaffey’s automotive technology department. To give a little insight on how it all came together, Sam Contino, the instructor championing the effort was a natural-born teacher and promoter. In 1965, Sam operated Sam’s Auto Electric in Ontario, California, where he conducted two-week seminars on basic tune-ups, and word spread around town about a mechanic that taught really interesting and informative classes.

Word spread to the point that Chaffey’s dean of vocational instruction contacted Sam and offered him the opportunity to teach tune-up and automotive electrical courses at the college. As fate would have it, teaching was something Sam had always wanted to do and this was his chance. Sam went to UCLA part time and obtained his teaching credentials.

The early ’70s were a golden age for motorsports in Southern California’s Inland Empire region. Riverside Raceway was in full bloom and Ontario Motor Speedway had just opened up in nearby Ontario. Sam got wind GM was going to unveil the 1970 Camaro to the motoring press at Ontario and spotted an opportunity.

Sam contacted John DeLorean, the GM executive in charge of the event and offered the services of Chaffey’s auto shop students to keep the new Camaros detailed. The students happened to meet actor and then budding race car driver Paul Newman, and spoke at length with Paul about Chaffey’s race car technology program. It was the beginning of a great relationship between Paul and the college’s racing program. Shortly afterward, Paul donated a V-8-powered VW Bug for the students to work on and this sparked an onslaught of new students to the program. During the course of time Paul donated two more cars and Carol Shelby donated a race car hauler.

Quoting Don Evans from his June 1969 Hot Rod editorial, “Mr. Contino is not one to merely have ideas; he is a hustler who follows through on every detail to see that the job gets done. He not only sold the college’s board of trustees on the racing program, he figured out how to do it without spending the taxpayer’s dollars.”

In 1980, Ontario Motor Speedway closed and was leveled to the ground followed by Riverside International Raceway closing in 1988 to make room for suburbia. Sam Contino retired from Chaffey College in 1986 and it wasn’t much longer after that enthusiasm for the race car technology program died.

The last trace of the Chaffey Trans-Am Camaro we could find was an October 5, 2009, mention on Bring A Trailer. For complete access to Hot Rod magazine’s entire library archived online all one has to do is join the Hot Rod Club at the platinum level.