Walk The Line: This 1967 Nova SS Built by CPP Spans the Gap Between Street and Competition 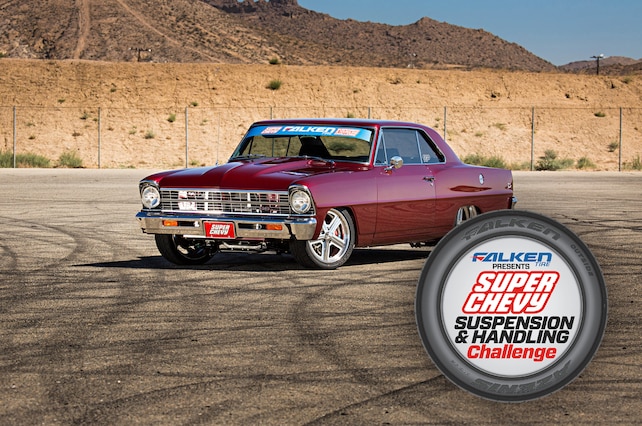 It was the year of the Nova at the 2015 Super Chevy Suspension & Handling Challenge presented by Falken Tire. However, even though six out of eight competitors brought out Chevy IIs, there was not a single car with even remotely the same approach to suspension design. Each had a unique method of bringing muscle car handling into the modern century. The first in a long line of features to come from the event is Classic Performance Products’ (CPP) gorgeous 1967 Nova.

The car was built in-house at CPP’s Placentia, California, facility by their team and then sprayed in flawless Corvette Monterey Metallic Red paint. While the team majorly thrashed to get the car together in time for the event, no detail was spared, and the overall quality of the car is not befitting of its rushed timeline.

Under the hood of the Nova is an Edelbrock Signature Series 383ci crate engine, fed by an MSD Atomic fuel-injection system. Power goes from the front to the back via a Bow Tie Overdrives 765R4 transmission and Currie 9-inch rearend equipped with 3.70 gears and an Eaton Detroit Truetrac limited-slip. Intro Customs Nitro wheels shod in sticky Falken Azenis RT615K rubber, 225/40/18 front and 265/30/18 rear, make up the rolling stock, while a host of CPP suspension, steering, and braking components help that rubber stay firmly planted on the road.

We spoke to Jim Ries of CPP about those suspension components and why they chose the Nova as their foundation for the 2015 Super Chevy Suspension & Handling Challenge.

“We always look at our customer base and try and build something that stays true to who we are,” said Ries. “This car is really highlighting our product and our stuff is designed in earmark for the do-it-yourselfer and the guy it home.”

The early Nova has always been a popular platform among Bow Tie enthusiasts due to its light weight and availability. The factory suspension however, was never designed to tackle high-speed corners or deal with sticky modern rubber like the Falken Azenis shoes it now wears. That’s where CPP steps in.

“I think the early Nova was one of the worst designed GM production cars of the era,” said Ries. It was the economy car of that time; it was designed to be inexpensive. They came with a really heavy strut rod and a light-duty lower control arm – everything is just really bound up from the factory. It doesn’t align well, it doesn’t do a lot of things well.

To remedy the problem, CPP used one of their Pro-Touring Stage IV kits on the car, which is, essentially, all of the best components that CPP manufactures for the early Nova rolled into one kit. That same Pro-Touring kit can be purchased outright or split into stages as money and garage time allow. It features a steel crossmember that bolts in place of the troublesome factory strut rods, giving the car a modern lower control arm design that improves suspension geometry and rigidity. On the ’67 Nova, this is paired with tubular upper and lower control arms, a coilover kit, a pro touring sway bar, modern Falken Azenis tires, and 13-inch big brakes to reign in all that speed.

At the back of the car, CPP’s Pro-Touring Stage IV kit retains leaf springs, which are elegantly simple and extremely functional for a dual-purpose car. The Currie rear axle was treated to a sway bar and adjustable Viking shocks. A set of CPP traction bars keep the car hooked up and prevent the leaf springs from deforming under hard acceleration.

The suspension setup that CPP chose is simple, affordable, and perfectly capable of taking its owner out to a track day/autocross and cruising home in comfort.

But enough about what it’s made of! We handed the keys over to our ringer, Mary Pozzi, for her analysis of what the Nova could do and here’s what she had to say about it.

For CPP, the Nova product line is entry-level and a hobbyist bolt-on type of build. What’s cool is these parts totally transform a car from something that would struggle to get around a corner to one that can definitely stick with the big boys.

Once on the track, however, things changed dramatically and I quickly realized just how important a shock adjustment … or four … made. My recommendation to go to a mid-point brought healthy support and the overall handling perked up a ton. I noted a huge improvement overall and the majority of “lateral delay” was eliminated. I did note, however, the steering to be somewhat sluggish offering a floaty feel that made transitions for corner entry through track-out to be a bit numb. Turns needed to be well-prepared for to get through them smoothly. What was surprising was how good this car was in the tighter “Z” part of our Streets track. Even with the torpid steering response, I’m guessing the timing was synched between a turn of the steering wheel and a reaction from the front wheels that got me through this slower, tighter reaction in fine form. Either way, this car was the best of the bunch in the “Z.”

The CPP Nova is pretty easy to drive and got around the track very well. All of the parts on this car complement well and it’s good to see a build where the drivetrain didn’t overpower the tires. My only recommendation here would be to ratio-down that steering to get a better response. I could move the car around when driven up to the limits but like others tested this day, a life of track performance isn’t what this Nova was built for in present form. As part of my cool-down “Street Evaluation,” I found the CPP Nova to be very pleasant and neutral. The slow steering commented on previously was a non-issue and all was good.

For those on a budget, think strongly in this direction as you get a ton of product for your buck. And, if you choose to have some track or autocross fun, remember you’ve got a huge array of steering ratio choices for your build. That alone would make the transformation complete and not break the bank in doing so.

How’d It Stack Up?

We put CPP’s Nova through the wringer on the 420-foot slalom course, the Streets of Willow Springs road course and the skidpad. And, because some of those numbers are a little ambiguous for those not familiar with the slalom or road course, we paired the car against a 2015 Camaro SS 1LE for comparison. The little Nova managed an extremely respectable 0.90 g’s of lateral grip on the skidpad and hung right with the Camaro through the slalom. It was only on the big track that the Camaro and its complement of electronic nannies such as traction control and antilock brakes pulled ahead.