Who’s On First? Vengeance is, that’s who… And they’ve got a 1,000-rwhp Stingray to prove it 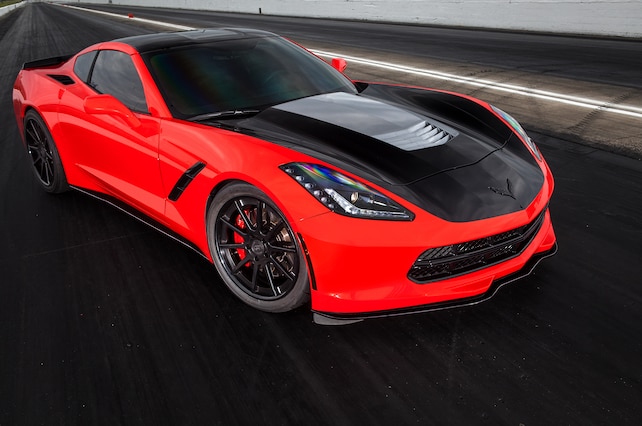 Who, what, when, where, why. That’s the goal of every story and we’re going to just jump in now and get it out of the way. Ron Mowen, 2014 Corvette Stingray, Corvette delivery day 1, Vengeance Racing, because Vengeance Racing. There, that’s about all you really need to know about that. If you have an Internet connection and decent eyesight you’ve already seen this little red Corvette ripping it up on the dyno, laying claim to the “first 1,000-horsepower C7” title, and even riding with some, uh, “beautiful” passengers on YouTube. You’ve also no doubt seen it on the forums. But while you may know a lot about the accolades and the quick facts, you may not know a lot about what it took to get here.

The real story starts in November 2013, as the entire automotive world waited for the “very first” C7 Stingrays to make their way into public hands. Private owners across the country stalked their local dealerships to take delivery of new C7s and many of the first lucky ones were quickly squirreled away to private, heated garages, never to be seen again. Ron Mowen, however, wasn’t about to do that. Oh no, with just 8 miles on the odometer, Ron sealed his Corvette’s fate with a massive burnout in the parking lot of his local dealer. Yep, that’s how Vengeance rolls. Burnouts in the dealership. From there, with the engine and drivetrain “properly broken in” it was direct to the dyno for some baseline numbers and some poking around in the new ECM. Remember, at the time, no one had tuned a C7 before and according to many, it was “untunable” thanks to the direct injection and the E92 ECM. Twenty-five additional horsepower later, and with some 34 extra lb-ft of torque on tap, Vengeance PCM tuner Mike Carnahan proved that not only was tuning possible, but it was very worthwhile.

Cool, so they did a burnout and dyno’d a new C7, that’s not a big deal. Well, maybe not, but on day two, Vengeance Racing technicians tore the engine down to the short-block and started work on installing a new camshaft kit to maximize performance and test the new LT1 in the real world. That kit included a custom Vengeance Racing-spec’d camshaft (don’t look for the published specs, these guys like to keep some secrets. Can you blame them?!), a dual valvespring kit, hardened pushrods, new lifters to remove the stock Displacement On Demand system, a COMP Cams VVT Phaser Limiter kit, and a set of upgraded trunnions for the rocker arm system. Add in a set of long-tube headers or two to get the newfound air and fuel mixture out of the way, and Vengeance was ready to rock it out on the dyno. Day two and the Stingray was pumping out 511 rear-wheel horsepower and thumping along with an all-new direct injection-compatible camshaft kit. As you can see, this wasn’t your old-school (if we can call the LS old-school) quick camshaft swap, as the new LT1 engine demands more parts, more time, and more care to make it all work. But this is what being on the cutting edge looks like, and it has to happen fast!

On day three, the crew rested. And posted on the Internet. Actually, that’s mainly what they did.

Then came the nitrous. You see, this is a crew that demands big power, not just for Internet glory but for runs up and down (and up and down and up and down) their local stomping grounds. With a hit of the giggle gas from a newly developed Stingray-specific Nitrous Outlet kit, the C7 pumped out an amazing 739 rear-wheel horsepower and 739 lb-ft of torque. That made it not only fast, but also the most powerful C7 in the world, although the competition for the top dog spot was literally changing by the hour.

Then came the blower. Yep, the camshaft was cool, the bolt-ons were helpful, and the nitrous was nice, but the Vengeance Racing crew wasn’t stopping there. It was supercharger time, and East Coast Supercharging (ECS) had everything they needed, including a black Novi 1500 supercharger head unit, to get up and running fast. On 14 psi of boost – what, you didn’t expect some stock pulley stuff here, did you? – and a little bit of methanol injection from AlkyControl, the still fresh C7 laid down 890 rear-wheel horsepower and 743 lb-ft of torque, making it the – you guessed it – most powerful C7 in the world.

Then came the nitrous, again. And with all of the boost, and all of the nitrous, and all of the methanol, and some of the race gas, this C7 became the very first Stingray to break the elusive 1,000 rear-wheel horsepower barrier. It made 1,018 to the rear wheels, if you’re wondering, and it did it with essentially just five major modifications. That means Vengeance Racing cracked 1,000 horsepower with a stock bottom-end LT1, on a stock clutch, with a stock drivetrain, and stock injectors! And it wasn’t even March 2014 yet. Most other people on the streets hadn’t even seen a Stingray in the wild and the Vengeance crew is busting out 1,000-horsepower dyno pulls, crazy street videos, and 10-second slips from the track. Oh, you thought this was just a dyno queen that wouldn’t run a number? Yeah, we didn’t think you did.

Then came the half-mile, where the Stingray backed up its impressive traps at the track with an even more impressive 171-mile-an-hour half-mile speed. And then came the fun runs, and then the street runs, and then the photo shoots, and then the sale. That’s right, this story doesn’t end with Ron driving into the sunset, keeping his prized possession for the rest of time. You see, this was and always will be about innovation, growth, and firsts for the Vengeance Racing team, and once it’s been done, and they’ve learned all they can, it’s time for something new.