Worth the Wait: Erick Hemphill finally gets the 2012 SS of his dreams 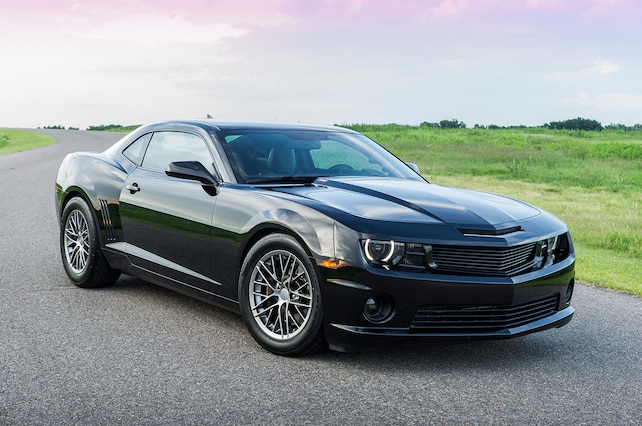 When the fifth-gen Camaro hit the streets in 2010, Erick Hemphill immediately fell in love with the new design. So, without hesitation, he began to learn as much as he could about the available options. The plan was to save up the funds to be able to purchase a brand-new model with every option he could afford.

In the fall of 2012, Erick set off to the local Wichita, Kansas, Chevrolet dealership to see what they had on the lot. Bad news, the black-on-black six-speed 2SS/RS model he was after would take a couple of weeks before it could be built and delivered. Good news, a car matching the options he was after had been found at another dealership and was on its way to Wichita.

With Erick’s brand-new Camaro home, his first goal was to get some miles and seat time with the car. The modding process started out slow because he wanted to add only the parts that wouldn’t void his powertrain warranty. So, first on his to do list was to help the car breathe better by adding a Fastlane Pipeline intake and a VMAX ported throttle body. After doing some research on making a custom exhaust he purchased a MIG welder and started practicing on smaller projects until he could churn out a good weld bead. Once he felt ready, the factory exhaust system was cut off at the mufflers and new piping was stitched in place.

Erick was pleased with his results and the way his car sounded, so for the time being he was content. But, after six months had passed he was starting to get the itch again to continue modifying his car. Also, by this time he decided the warranty probably wasn’t worth trying to save and the green light was lit for more modifications.

After doing more online research, a set of 1 7/8-inch long-tube headers from Texas Speed along with a 3-inch JBA exhaust system from Juiced Motorsports was shipped to his front door. It wasn’t long before Erick had his car back up on the jack stands to install his new power goodies. He wasn’t done just yet because now, if he wanted the maximum power out of his setup and good driveability, he was going to need a tune. Florida Speed and Power was contacted to ship him the latest HP Tuner and an AEM wideband gauge so he could have the tune the car.

With this newfound horsepower, traction was now an issue. Next up were BMR poly bushings for the subframe, trailing arms, upper control arms, and differential. While the suspension was apart, Erick also chose to install BMR 1-inch drop springs. These extra items were easy on Erick’s pocketbook, but what was next would be a large investment for him. GForce Engineering delivered their full 9-inch IRS package and a McLeod RXT twin-disc clutch.

For Erick, the suspension and driveline was a real tough upgrade to install, but what he really had a blast doing was tearing down the engine and rebuilding it. After consulting Brian Tooley Racing, a BTR custom grind cam now resides inside the block. The goal was to push the dyno rollers to 475 rwhp on the engine alone.

Over the 3 1/2 years since Erick first took home is 2012 Camaro, he’s really enjoyed the research and getting to modify his car with his own hands. And, not that his bone stock Camaro is a mean track machine, he knows it can take anything he can throw at it.