Crony Connection: Knowing the right people can’t hurt, but scoring a magazine feature is all about building a cool car 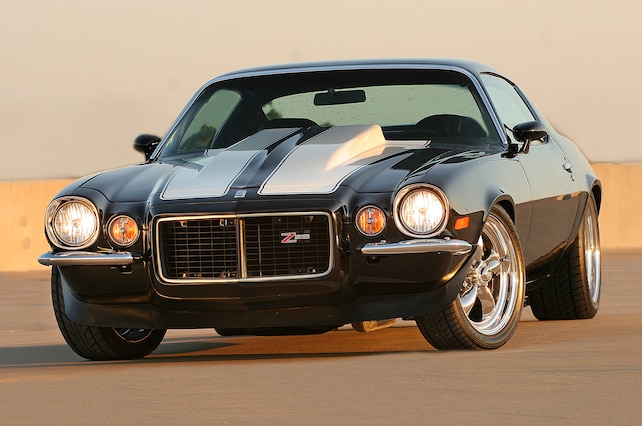 Pity the crony. He tags along with his buddy to check out what car magazine photo shoots are all about, only to realize he’s been duped. Cronies arrive at the scene expecting to watch a fancy-schmancy production from the sidelines, then discover that shoots like this are rather quaint and vapid affairs where their presence means they’re relegated to slave duty by default. They’re barked at to perform menial chores. Ultimately, his buddy gets a magazine feature and the photog gets a paycheck, but the poor little crony doesn’t get jack. That’s so not cool, dude, but maybe there’s something in it for the crony after all.

Perhaps the best way for cronies to receive some form of compensation for their efforts is to pull up to the shindig in a cool ride. That’s exactly what Bobby Werner did while we were busy shooting his friend’s car. His red, 350-powered four-speed 1970 Camaro immediately grabbed our attention. While it had all the right stuff—definitely a show-caliber machine—we never called Bobby back to set up a photo shoot of his own. Maybe we were just too lazy to pitch it to the boss. Or maybe we just had too much ’tude.

Whatever the reason, the next car we saw him in wasn’t the type of machine that you shoot when you get around to it. This split-bumper masterpiece was something you had to shoot immediately. With a big-block, six-speed stick, just the right stance, immaculate paint and bodywork and polished everything, it transcended all the laziness or bad attitude a photog could throw at it. “I liked that red car a lot and it was very nice, but this one takes everything to another level,” he opines. “I wanted to build a car that could do a little bit of everything, something that I could just turn the key and go in but would still rip the tires off of the car. I can do just that in my ’71, and it will literally stop traffic wherever it goes.”

A former rustbelt street racer, Bobby’s been fiddling with every car he could get his hands on since he was a kid growing up in New York. His first project was a 1971 Monte Carlo that ran mid-12s courtesy of a juiced 355. After he blew it up, next came a built 454 that ran 11.0 on the engine alone. Through the long periods of Northeastern downtime, Bobby learned a few things about wrenching. “When you live in cold climates like that, the good thing is that it makes you seek shelter indoors and work on your car,” he explains. “Rebuilding motors and scheming up new combos each winter become a tradition, and when spring rolls around, everyone’s looking for action on the street. Things just aren’t the same in places where people take nice weather for granted.”

Even after relocating to warmer surroundings, Bobby’s mod bug persisted. He coaxed a Buick Grand National into the 11s even while driving it daily, and built a 500hp 355 for his wife’s 1992 Corvette. “She always asked me what the bottle in the trunk was for, so I told her to say that it’s a fire extinguisher if the cops ever pulled her over,” he quips. Although he thoroughly enjoyed playing with late-models, his inexorable lust for muscle cars eventually prevailed. “New cars are cool, but old Detroit iron is what hot rodding is all about. Newer cars are so boxy and generic looking, but the body lines on older cars are so much more interesting.”

His original target was a 1970 Chevelle, but when the long search didn’t pan out, Bobby found just what he wanted in a red 1970 Camaro. Or at least that’s what he thought. A certain bad influence in his life made sure that he wasn’t content for long. “There I was enjoying my red car, when my friend S.W. (trust us, you can’t pronounce it) who sells high-end cars for a living starts emailing me pictures of this black car,” he says. “It was just stunning, and I sold the red car to buy it.”

The new acquisition was mostly finished, complete with a 605hp 496 Rat equipped with a forged rotating assembly, ported Dart aluminum heads, an Edelbrock Super Victor intake manifold, and a Barry Grant 850-cfm carb. It’s a heavy-hitting engine for sure, something Bobby’s quite accustomed to, but he aspired to build a more well-rounded performer than the drag beasts of his past. To accomplish this, he affixed a Richmond six-speed trans behind the 496 for relaxed freeway cruising and bolted a set of Wilwood four-piston brakes to the spindles for rapid deceleration. Enhancing cornering acumen up front are Heidts tubular upper and lower control arms, QA1 coilovers, and Detroit Speed Inc. power steering. Hotchkis sway bars in the front and rear attenuate body roll, while CalTrac bars help put the power down. It all rides on 18-inch American Racing Torq-Thrust II wheels covered in Nitto rubber.

Like any proper Pro Touring cruiser should, the Camaro boasts a slew of modern interior trimmings as well. Creature comforts include a Vintage Air A/C system, a Pioneer stereo, and power windows and brakes. Reporting the vitals from the view through the Grant steering wheel are a set of Auto Meter Phantom gauges mounted on a Covan’s Classic instrument panel.

In some respects, Bobby’s second-gen is a reflection of a hot rodder that’s all grown up, someone who has left street shenanigans behind and developed a taste for refined, sophisticated street machines. Don’t jump to conclusions, however, because parked right next to the second-gen in Bobby’s garage is his 1995 Z28, an EFI hooligan that sports nearly 800 nitrous-sniffing ponies from its 396 small-block. “Don’t tell my wife this, but I really miss going to the track and I’d really love to build another race car,” he admits. “As much as I’m tempted to go racing, I realize that my second-gen is much more practical, and by far the nicest car I’ve ever owned.”

We haven’t seen all of Bobby’s past and present rides, but he’s probably accurate in his assessment. Few cars can match the overall excellence of this second-gen, which is why it’s featured here before you. As Bobby will attest, being a crony on a photo shoot doesn’t pay. Rather than showing up with an ulterior motive in mind, your time is much better spent building a cool car.

Take it from Bobby.