Twisty: The Security of Maturity, Plus a Lead Foot 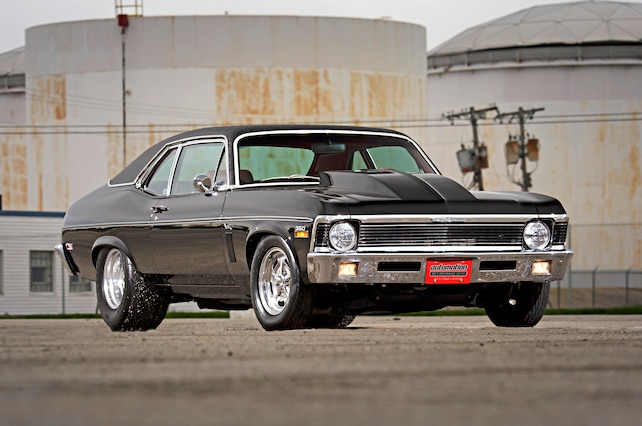 We see tons of hot cars at CHP. Though body style and paint tacitly distinguishes one from the rest, on the main they are animals of the current vogue and use slight variations of the same equipment … all under the web of popular notion. Though the numbers are vast, a few do exhibit thoughtful attempts at originality, which handily separates them from the pack. We applaud the originality that was the core of ancient hot rodding, when people first used their minds, their hands, and what rudimentary tools they had (the hot wrench right on the top of the pile) to make the stuff they needed.

Even in this multibillion dollar aftermarket, where anything is possible and everything is store-bought, there are nuances. Old hands have seen, read, and heard it all to the point of projectile vomiting. The hacks (me) that write car features for CHP and other periodicals on a constant basis are acutely aware of this, and when we notice a needle winking in the sun right next to the haystack, our foreheads unwrinkle and we sip an ice-cold beer and rejoice.

Ol’ Gary Geiger didn’t give his age, but we suspect he’s thrashed a hot car or two along the way. “I did the Nova for many reasons, among them memories of younger years and to see how nice of a car I could build now. But mostly it was for the love of it. I got in it like a son whose dad loved cars.”

His maturity has calmed him. No rush to get it done. He’s enjoying the journey and has no final destination in sight. “I’ve been building this Nova for 14 years. I wanted something that was a driver and that could be built a little at a time. Not being able to afford one that was done, I knew it would be difficult to find a solid car. I was thumbing an issue of Hemmings one afternoon and found the car … and it was in my area code.

“It’s funny how things work out. After all that searching, the car was five miles from me, gold-on-gold with a vinyl roof, 307 motor, and factory air. I remember saying to myself that it was one ugly turd. It came from Visalia, California, and had been shipped to Indiana a couple of months prior. It showed 66,000 miles on the odometer, it was straight everywhere, and there wasn’t a spot of rust anywhere.” The eventual crew included friends Jim Ford, John Amick, Wade Sellars, and Shirley Melloh.

Although Gary wanted a tuxedo-sharp exterior (as executed by Dan South and Mark Ross at Miner’s Body Shop in Indianapolis), he wanted to keep it stock and have the deep ebony paint do all the talking, so he and his warriors dove beneath it. They installed some of the chassis components and made adjustment and had Indianapolis heroes do the rest. Paradise Road Rod & Custom on East 25th St. introduced the solid body bushings, DSE subframe clips, QUADRALink suspension, Panhard rod, and mini-tubs. The Moser 9-inch was fitted with a Detroit Locker differential, 3.89:1 gears, and 35-spline shafts. Before they quit the back forty, they dropped in the DSE coilover dampers. Gary and friends rebuilt the stock front suspension without any aftermarket pieces save for the AFCO shock absorbers.

Then Gary deviated from the norm … spectacularly. While he could have used any engine configuration, especially the mega-trendy LS platform, he went with a big small-block built by Tim Linder at prolific M&M Competition Engines out on Five Points Rd.

That needle next to the haystack is a cool, serious beauty raised from a Dart Iron Eagle small-block that’s out to nearly 450 cubic inches. Eagle crank and rods and Diamond pistons cycle within and that COMP solid roller nudges the mandatory shaft rocker system. The hook? Cylinder heads that were once NASCAR-exclusive. They’re the sexy SB2.2 castings with 11x4-degree intake and 8x0-degree exhaust valve angles and produce flow numbers like a big-block. Sure, they require different pistons for the left and right banks, among other anomalies, but are optimum for a single-carburetor application. Expensive? You think? Gary says that the most challenging part of the buildup was “paying for the motor.” On top of that, he dropped some more shekels on a little insurance: an Induction Solutions 150-shot. Best times? On the motor it went 10.91 at 121; on the jolt, it peels 10.16 at 135. For utmost in consistency, Mike Walls built the Nova a Turbo 400 and gave it a reverse manual valvebody and a 10-inch Neal Chance converter.

Gary had his bud Wade Sellars fabricate a dash insert from 18-gauge steel for the Auto Meter gauges. It assimilates like a birthright and it subtly coincides with the rest of the tableau that is nothing if not scrumptious. Jim Mathews at Indy Auto Trim in New Palestine, Indiana, worked the room, splashing crimson over the seats, the low-nap Daytona weave carpeting, and the door panels. Tight, streamlined, and sophisticated it is.

“After 14 years of beating on it in the summertime and upgrading it over the winter, I have what you see here,” chortled Gary. “You know, I think I might just have to take a break now and go flog on her some more. Ha ha.”