This 1971 Chevrolet Chevelle Made You Look! 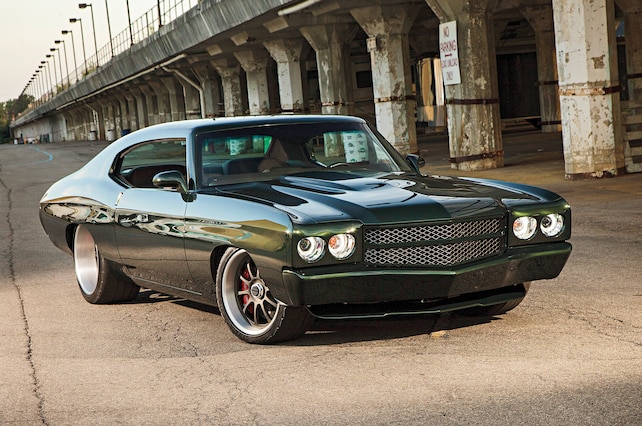 “I see lots of these Chevelles at shows and they are all the same, other than wheels and color,” said Dave Jaeger. These words from a man who lists his occupation as inventor. Certainly, such human beings have a different view of the world and how it works. They play off an exclusivity factor, something of their own making. They’re not reinventing the wheel, but something close to it, something that shimmers from the metal. On close inspection and on viewing the silhouette from different angles, it’s evident that Jaeger’s car is different. By the saints, did he chop that top?

This automobile is a palette of intricate metalwork. Chris Smith, owner of Smitty’s Custom Auto in Tiffin, Ohio, revealed the plan. “Dave brought us the Chevelle. He said that all of them look the same, so fix it. We were given a blank canvas, but it was his idea to lower the roof and do the six-port rear bumper.” Indeed, the roofline is 1 1/2-inches lower than normal.

Chris and Tony Smith, along with Justin Thomason and Tim Kinn, did the customizing. They pie-cut the roof to accept the shorter convertible windshield and used an English wheel to stretch metal to produce compound curves and form sections that never were. They cleaned up the exterior, deleting the driprails, gapping the body, tucking the bumpers in, and “pocketing” the custom door pulls. The bumper is all-out, completely reshaped and V’ed down and complemented by Tony Smith’s handformed grille section. They flattened and smoothed the firewall. They fixed a custom-built fuel cell under the package tray and put the fill entry through the quarter sail panel with a RideTech filler neck. The late Tom Dobroski (Millbury, Ohio) built the in-your-face six-taillight bumper. After all the rubbing was done, Smitty’s Kinn applied the PPG Global custom Green Pearl.

Under the surface, the Chevelle simmers with completely new motive and chassis power. Smitty’s laid the foundation with a formidable Roadster Shop chassis that included billet tubular control arms, spindles, RideTech adjustable coilover shocks, and rack steering. In the back, it was four-links and more RideTech adjustables. The axle housing is a 9-inch type as fabricated by Moser Engineering, and it employs an Eaton Truetrac differential and 4.30:1 gears.

The wheel/tire combination is always critical to the outcome, and in the case of Jaeger’s Chevelle, it’s downright crucial. A deep negative offset and brushed-surface hoops are the perfect foils for the dark paint. In this application, they are Forgeline ZX3P in 18x10 and 20x12. The friction component is the latest BFG offering: g-Force Rivals that tape out at a squatty 275/30 and 315/30. Not far away, Smitty’s installed 14-inch Wilwood discs at each corner—six-puck calipers in front and four-pucks following.

Fuel is sourced from the custom tank via a submerged Aeromotive pump. Waste is pulled out by Ultimate Headers that have been Jet-Hot-coated. The 1 7/8-inch primaries pour into a 3-inch stainless tract interrupted only slightly by Flowmaster 40s. It terminates in three big exhaust tips. At the wheels, this tidy bomb makes 540 hp at 6,200 rpm and 530 lb-ft of twist at 5,500 rpm. Transferring torque reliably is the job of the Tremec T-56 Magnum as assembled by Bowler Performance. It is preceded by an OE pressure plate and flywheel assembly under the Quick Time bellhousing. Jaeger changes up with a Bowler shifter as the grunt twirls tirelessly down the Dynotech prop shaft.

Jaeger takes command in well-appointed surroundings while perched comfortably on a Mercedes-Benz bucket. Heralded Fender Designs in Clarkston, Michigan, did the upholstery in an acre of custom-dyed leather. They followed with matching door and side panels and did the cut-pile carpeting and headliner to accompany. While the dashboard metal is unaltered, it has been fitted with an Iron Works billet gauge cluster that welcomes the cadre of Auto Meter informants, including the all-important manifold pressure gauge. Jaeger twists the Flaming River steering wheel atop the Flaming River tilt-column.

The gestation required two years, but when did Jaeger know the project was really finished? “When my 10-year-old grandson Cole David looked the car over and proclaimed, ‘Pa Pa, I think you nailed it.’ It makes a lot more sense when you know that this old A-body was a drag race car for a decade, complete with big-block, dings, bangs, and everything cobbled up.”