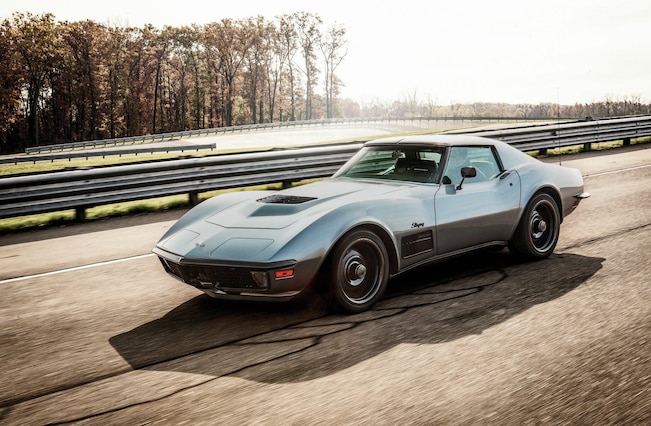 Awesome car, right? Built in Detroit by Chevrolet Performance for Jimmie Johnson himself, you’re looking at one of the coolest builds to roll across the 2014 SEMA Show halls in years, but you’re probably also thinking, Of course it’s cool, it’s built by Chevy Performance with a perfect ’71 roller, a brand-new LT1, an around the clock team of workers, and a checkbook I can’t even imagine. Well, we can’t blame you for thinking that. But what if we told you this ’71 Corvette actually began life as a beat-up driver found on the Internet and was built not by an assembly line full of workers, but instead a couple of highly skilled technicians working in a high-security building at the Milford Proving Grounds. And what if we told you that this Corvette—the first project on the planet to house Chevrolet’s newest LT1 crate engine—wasn’t just a show car, but instead a running, driving engineering project that was instrumental in bringing the new LT1 engine to market? Now that would be a whole different story.

“We chose the 1971 Corvette because it’s one of the most up-and-coming enthusiast build cars out there right now,” said Dave Ross, Chevrolet Design Manager. “We wanted to partner with an individual who was a Chevrolet enthusiast and passionate about Corvette. Jimmie was a natural fit as the [2013] NASCAR Sprint Cup champion.” If you just screamed “up-and-coming?!,” we’re betting you’re already a C3 owner, but Dave is correct, as we are seeing more and more interest in these gorgeous bodies as the years roll on, and we’re big fans of the resurgence. Of course, the ’71 is also important for its engine, as it marked the second year of the LT-1 engine, which featured 11:1 compression, a solid roller camshaft, four-bolt mains, and a four-barrel carburetor. Pretty high-tech for the times, sure, but compared to the Gen V LT1, well, it leaves a little bit on the table.

One of the GM builders carefully lays down pinstriping tape in preparation for painting the hood graphics.

No pristine show car but not a rat either. The condition of the ’71 that Chevrolet Performance started with was no better or worse than anyone could find in almost any town for a very reasonable amount of cold hard cash.

Out with the old and in with the new. This particular ’71 drove in with a carbureted 350-cubic-inch, 270-horsepower small-block, which pales in comparison to the 460-horsepower, 376 cubic-inch LT1 that was to replace it.

The heart of this cutting-edge SEMA build was the new 6.2L 460-horsepower, VVT, Direct Injected LT1 crate engine available now from Chevrolet Performance. The new engine was given a quick test-fit and to nobody’s surprise it easily fit in the stock engine bay.

Believe it or not, this build started life as an 82,000-mile running and driving ’71 Corvette, which was promptly torn down by the Chevrolet Performance build team in a top secret location at the Milford Proving Grounds.

Compression is similar, at 11.5:1, but other than that, the all-aluminum LT1 is in a league of its own. Gone is the aluminum intake and four-barrel carb, replaced with Direct Injection fueling, an advanced Variable Valve Timing camshaft, and newly designed cylinder heads optimized with over 6-million hours of computational analysis. Yes, 6-million hours. Into the cylinder head design. That’s over 684 years if you’re wondering. What does all that time equate to? How does 460 horsepower and 460 lb-ft of torque sound? What if we also told you that the 6.2L LT1 was comparable in torque to that of the gigantic 7.0L LS7 up to 4,000 rpm while also holding the title for the most fuel efficient Corvette ever built when installed in the C7? Suffice it to say, it’s an epic Corvette powerplant, but it’s one you could easily install in your ride if you’re looking for a modern Chevrolet Performance engine.

For Jimmie’s Corvette, the build team at Chevrolet Performance started by pulling the ’71’s engine, transmission, rearend, and everything associated with those components, and putting them all aside. For the purists among us, we’ll let you in on a little secret, this ’71 wasn’t a real LT-1 car from the start, and the team at Chevrolet Performance actually pulled a traditional 350 from the bay for the swap. Once removed, it was time to test-fit the new engine and transmission, which fit in place with much less effort than you’d imagine. In fact, besides a new transmission crossmember and a new set of engine mounts, the new LT1 basically slipped right in place, without having to do any extreme cutting, welding, or relocating. There are a couple of interesting challenges to the new engine—namely the lack of a traditional power steering assembly and the mechanical fuel-injection pump under the intake manifold—but other than that, consider this similar to an LSX-style swap with a lot more cool technology.

Fuel? That’s not as hard as it sounds, and the Chevrolet Performance team set out to make it as easy as possible for the average mechanic to handle. The Direct Injection fuel pump, which can pressurize the fuel to over 2,000 psi, is built into the engine itself and is driven off a tri-lobe found on the end of the camshaft. This design means that a builder doesn’t have to worry about the system, they simply need to feed it fuel using an electric pulse width modulated fuel pump and the supplied LT1 Controller Kit will take care of the rest. Everything else is done for you, with the camshaft taking care of the pump and itself when variable timing is required.

The rest of the engine dress is somewhat traditional, with the build requiring a set of manifolds, a couple of oil lines, an intake and exhaust system, and hooking everything up. But ‘the wires’ you scream, ‘what about all the wiring!?’ No worries, there’s a wiring harness for that, supplied by the Chevrolet Performance team that hooks everything on the engine and transmission directly to the supplied controller for easy EFI on the run. The build team did need to swap out the ’71’s gas pedal for a new drive-by-wire pedal (also included in the kit), which was as simple as it sounds. As for the rest of the drivetrain, a new LS/LT manual transmission bellhousing allowed the team to hook up the T-56 Super Magnum transmission, which provides six buttery smooth gears for Jimmie to bang on as he rolls out on the track.

Of course, a SEMA build for a world-class driver can’t be all about the new engine, and the design team at Chevrolet Performance spent a significant amount of time working on every single detail of the ’71 to give it a race-inspired look while keeping it subtle and beautiful. “It’s always a thrill to get behind the wheel of a Corvette,” Jimmie Johnson said. “The traditional elements mixed with the modern-day touches really make this car unique.” Jimmie himself picked the custom blue hue along with the understated wheels, but modern aesthetic touches such as the billet hood louvers, side grilles, and stance came from a direct collaboration with the design team. The closer you look at this ride, the cooler it gets. One of our favorite touches can be found in the hood, where a CNC billet aluminum cut center louver gives a subtle nod to the C7, while taking nothing away from the lines of the C3. The side grilles too, which would be missed by most casual onlookers, are other touches appreciated by those of us who live and breathe Corvette.

And really, that’s what makes this Corvette concept so special. It’s a perfect blend of modern high-tech refinement and classic style. The drivetrain is all 2014, but the car itself is simply timeless. In a world where SEMA show cars need popup DJ booths and flamethrowers to stand out, Jimmie Johnson’s Chevrolet Performance Corvette concept stands alone, as a rare piece of machinery showing self-restraint, brilliant execution, and modern appeal. Now let’s see what you can do with that all-new LT1!

The frame was then separated from the body and given a complete restoration. This also made it much easier to start figuring out how to mate the 21st century engine to the 20th century chassis.

While the frame was getting worked over, the body was getting some much needed attention as well. The plan was to keep the classic vibe of the C3 but update some key areas like the hood and side vents. Those little dots are for Chevrolet Performance’s high-tech 3D laser scanner. It allows designers to craft new body parts virtually before sending them to the CNC machine to be produced. Yeah, we wish we had one in our garage too.

And here’s what the GM designers came up with for the side vents. We have our fingers crossed that they will be eventually offered for sale.

Engine mounts are always a tricky part of a late-model swap, and the LT1 required new engine plates to be constructed in order to position the engine correctly in the Corvette bay. And no, engine plates for the old LS platform will not work on the new LT1 block, but they are one of the easier things to fabricate. We also imagine that the aftermarket will quickly have them on the shelves.`

It’s always nice to have the right tools for the job, and having ACDelco in the building made it easy for Chevrolet Performance technicians to get it done.

The Chevrolet Performance Tremec Magnum six-speed transmission required a new trans crossmember to be fabricated and, along with the Chevrolet Performance LS/LT bellhousing system, allowed the swap to drop right in place without any additional modification to the chassis. Note the cool exhaust pass-through channels fabricated into the crossmember.

This Corvette came about through the passion of a few GM gearheads and not some vast army of builders.

The engine bay of a C3 would never be described as “spacious,” but the LT1 easily fit within the confines. Makes us wonder if a C7 Z06 blower would fit.

Designed on a computer, cut by a machine, and finished by hand, the center vent on Jimmie’s Stingray is the perfect nod to the C7 performance under the hood without detracting from the overall clean hood design of the ’71.

And here’s the hood all painted up and pinstriped. We think they nailed the melding of old and new perfectly.

Big power means you need big brakes, so the Chevrolet Performance team dove into their massive parts bin to dig up a set of C6 Corvette Grand Sport brakes, which were hung front and rear on the ’71.

The fully installed and detailed LT1 looks perfectly at home in the C3’s engine bay.