Is This 1971 Chevrolet Corvette the Ultimate Sleeper?

All in the Family: This good ol’ boy ’71 Vette never meant no harm 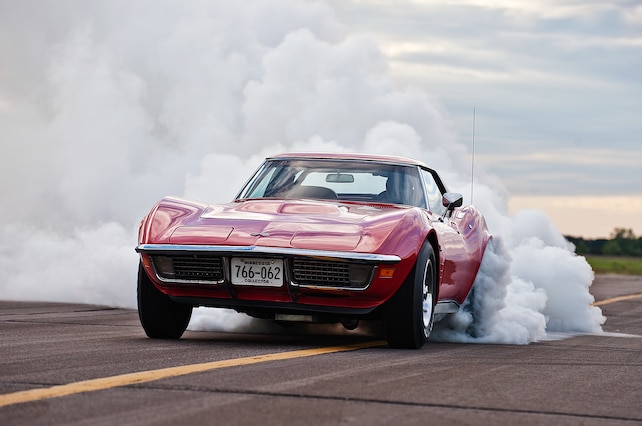 From the outset, this simple, standard-looking 1971 Corvette looks virtually period correct. Hell, ask Joe Marudas of Milaca, Minnesota, to pop the hood and you still might not think anything is amiss. You look at the big-block stuffed between the fenders, look at Joe, look back at the car, and think everything is right as rain. As a matter of fact, it’s almost too perfect of a crime.

But if you turned your back on Joe and snapped back you just might catch a giant good ol’ boy grin on Joe’s mug. Because what he ain’t sharing is that the 454 he said the car has, is actually a 582-cubic-inch big-block that thunders out 828 horsepower and 760 lb-ft of torque all naturally aspirated and leaving no one the wiser. Joe admits that it’s probably lost a few ponies due to driveline loss, but his 9.71 at 139.3 mph elapsed times tell an entirely different story. And by the enthusiastic nature in which he ripped out some smokies on this airstrip, we believe it.

“This car hooks hard and goes straight. Nothing fancy, it just works! When I’m going down the track wide open it feels the same as when I’m going down the freeway at 70 mph.” Joe has a hard time hiding his pearly whites at us as he talks about his car, “this is NOT a show car, it gets the crap beat out of it almost every weekend, whether at the track or on the street. I feel there’s nothing wrong with that. It’s what the car was made to do.”

Funny thing of it is that the car didn’t start nearly as nice as you see it now. “I’m a 53-year-old, self-employed auto-repair shop owner here in central Minnesota. I’ve had a lot of nice cars but never have I become so personally attached to one like this.” Joe went on to tell us during our photo shoot how he sold his 1970 Corvette to buy the house he currently lives in and has been kicking his own butt ever since.

“The car started out as a total basket case. I’ve had to restore pretty much everything on the car myself. Body damage, paint it, replaced the interior and every mechanical aspect of the car. I designed and built my own engine and did all the IRS stuff. Literally everything done personally myself right here in my garage at home, my wife calls it my mad scientist lab! I could talk about this car for hours!”

And literally he did. He told us how he assembled the LS6 clone with a 4.600-inch bore and 4.375-inch stroke engine packed with CP Carrillo pistons with Oliver 6.535-inch connecting rods wrapped around a Callies Magnum crank. Machine work was completed by BBS out of Eau Claire, Wisconsin, who also provided a custom-grind cam. Specs of said cam? S@$%-eating grin, remember? He ain’t telling. The heads, though, he did disclose are aluminum Dart Pro 1s with Manley Severe Duty valves coming in at 2.30-inch intake and 1.88-inch diameter exhaust, topped off with Jesel shaft-style 1.75:1 ratio rockers. The 1050 Dominator carb sits upon the dual-plane, stock-style intake, which was port-matched to the heads, and a stock-style air intake. All this is fed by a Holley HP120 pump and capped off with a set of Hedman headers and very short 3-inch to 2.5-inch step-down style exhaust. Trust us, once that fire is lit, it hides no more secrets!

The power is wrangled through a Coan Racing Powerglide and a Coan 10-inch converter with a 5,200-stall. That feeds the one-off IRS rear-suspension with a safety loop on the main shaft and four loops on the halfshafts, two per side. It appears fairly stock until you dig a little deeper. Joe designed and built this setup and it’s packed with 3.70 gears, Tom’s 30/31-spline axles, and a Moser spool just for good measure. Joe was able to take the spool, turn it a bit on the lathe and re-drill it to fit the stock case. Grin.

The chassis itself is pretty stock – with stock upper and lower control arms. Lakewood 90/10 shocks are about as fancy as the front gets. The back has a set of Van Steel offset upper and lower control arms to fit bigger tires and a set of QA1 single-adjustable shocks and VBP fiberglass springs comprise the basic rear suspension. Remember that grin? Well, Joe took that a step further and made an upper radius rod and brackets with custom halfshafts and the two safety loops per side that we already mentioned.

Still wanting to be as sleeper as it gets, Joe stuck with the stock 15x8 Rally steelies with period-looking Firestone G-70 Wide Ovals on all four corners. But he will bust out the 275 wide Mickey Thompson Pro drag radials when it’s play time.

“My plan from the get-go was to have the car always stay bone-stock appearing.” Yeah that word “appearing” should come with some massive air quotes. “The car was wrecked and auctioned, that’s all I really know about the car. It’s kind of like an animal you found at the shelter. I took it in and made it a family member and gave it a good home.

“I would say that this car has become a member of the family. It has been a real labor of love for me ever since I found it back in ’04. I have a beautiful wife and three daughters – 21, 13, and 3-years-old. They all know the car well and the youngest one named it ‘Red Roadster.’ My wife still drives it on the street from time to time. We like to take short trips to the restaurant or Dairy Queen, usually with the top off or down on nice days.”

Joe literally did talk to us about his car for hours on end and the way he spins it, it was easy to get lost in his stories because they’re all told so passionately, you couldn’t help but get a little worked up and want a Vette like this of your own.

“What I really like to do with the car is drag race it. I have been taking it to local muscle car index and bracket races for about eight years. I really want to do the F.A.S.T. and I’m slowly collecting parts for that.” Not only did Joe tell us that he refuses to put a full ’cage in the car (appropriate to its e.t.) based solely on principle, but he insists that he can rip off consistent 9.70 runs and still drive to and from the track. He seems almost serious enough to want to fight about it. Considering a lot of the trial and error stories he regaled us with, we totally believe him.

“It takes a very patient wife and kids to put up with a muscle car and drag racing addiction. They have come to my races and always been very supportive, sometimes helping in the shop. I really want to thank all my drag racing buddies, Big Block Shawn, and most all; my family.”