Double Trouble: 20 psi Positive Manifold Pressure … With a 150-Shot Back 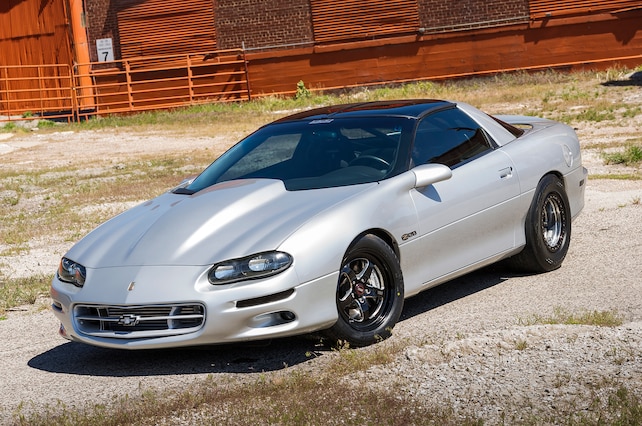 Wretched excess is not a new idea. People have been ascribing to it since the first tires ever smoked macadam. And of course they still do, now under the tremendous crush and immediacy of the social networks and that whole crazy YouTube business compounded by the deleterious infection of mind-numbing advertising drivel. Man, you better get your priorities straight. Now. Better get a long leg up on everybody else because that’s what they’re trying to do to you.

Billy Schwerin isn’t bashful. He went right for the blue sky with a double tap on the power side … the power of the turbocharger seems nearly unlimited, but the notion is even cheerier when there’s a nitrous oxide qualifier looming large behind it.

The 23-year-old Billy relates his expensive hobby. “I’ve had several F-bodies and Z06 Corvettes, but this [Camaro] is by far the fastest and the most favorite I’ve owned.” Billy’s been known to step out smartly. He spotted the lamb on ls1tech.com, shivered a little, and traded his LSX454-puffed 2010 SS for it straightaway.

He gathered his friends and confidants immediately and immersed them. Billy thanks the car’s original owner and builder Justin Keith for his after-purchase help. At the top of the chart, his fiancé, Michelle; then his dad, Bill; and younger brother Blake, along with Kiley Reynolds, Jacob Wright, Chris Brewer, Jim Parkison, Nick Blasingame, Nick Smith, Troy Emberton, Jeff Speer, John Wilson, and Carey Pepper. On the backside, there’s his tuner Justin Kalwei and the irrepressible Aaron Shoaf at Texas Speed & Performance.

The car was in fine shape, paint and sheetmetal pristine, but that really was not an issue because Billy was going to race the thing. He forsook form when the priority was function so he saved a chunk of time and money there. The car was low mileage, just 64K on it right now, so all the changes have been to its constitution. Why the juice on top of the turbo? You don’t carry a switchblade to a gunfight. You bring two guns instead.

Billy’s big one was a 408-inch LQ9 spec'd by Aaron Shoaf at Texas Speed & Performance to host a bunch of boost. The basis was a beefy amalgam of high-end components (Callies crank and rods and custom Wiseco pistons), and the aluminum cylinder case was carved and fortified to meet the onslaught. On the other hand, the LSA cylinder heads from the 6.2L supercharged engine have not been altered and use the rocker arms from an LS3 – another wise, cost-conscious move. Time and again, the OE assemblies have proven foolproof. Along that same line, it doesn’t make sense to incorporate trick parts when the original stuff will do just fine.

When Collin Williams finessed the Road Pirate turbo kit, instead of having to fabricate a header system, he used truck exhaust manifolds as the starting point. Companion to the cast-iron branches, the hot-side pipe has a 2.5-inch diameter; the cold-side tube is 3-inch and the downpipe is 4-inches fat.

To facilitate the pressurized charge as well as the wet nitrous oxide system, Aaron liked the Holley Hi-Ram intake manifold. He stuck an NX 102mm plate in its mouth and flanked it with the companion fuel rails and the solenoids for gasoline and nitrous. He usually runs a #50 nitrous jet and 2,000cc injectors. Fuel pressure is 55-60 psi. All is preceded by a 4-inch thick Active Autowerke intercooler core. The turbocharger is a 91mm Turbonetics piece, and fuel and enrichment is metered by a MagnaFuel 750 pump and an Aeromotive regulator. Nick Williams jazzed the 102mm throttle body. They got the engine running ragged and took it to Jim Parkison’s JP Tuning in freeway-close Van Buren, Arkansas, for the final laying on of hands.

Putting almost 1,000 horsepower and nearly as much grunt to the pavement in a unibody ain’t that easy, but Midwest Chassis in North Pekin, Illinois, (an undershirt of Peoria) gathered the right stuff and plastered it home. After sizing the UMI tubular K-member, Midwest installed the UMI upper and lower control arms, the QA1 coilovers, their own torque arm, and the BMR Panhard rod. The rear of the Camaro rides on QA1 coilovers, and the Midwest 9-inch axle is located by Midwest upper and lower links.

One of the things that Billy likes best about his little buddy is its stance, not an easy thing to pull off when you’re running skinnies that are a good bit taller than the Hoosiers on the back. It’s a trick of light and of perception. The wheel treatment is instrumental in reducing this visual disparity and the ride height is easily controlled with the adjustable shock absorbers. In fact, the wheels are actually what “drives” this rendition.

Young Bill is a fan of the 1,000-foot dragstrip and his Camaro has run 8-flat at 138 (with a 1.8-second 60-foot time) on that venue. He wants to compete in EFI Pro and expects 6.90s – maybe not with the current contraption, though. He’s already collecting pieces for the new LSX engine he’s coveting and hopes to run the Texas Invitational sometime soon. Better bring both gats anyway, Billy, put Fort Smith, Arkansas, on the map.