How to Prep Your New C7 Corvette for Serious Track Duty 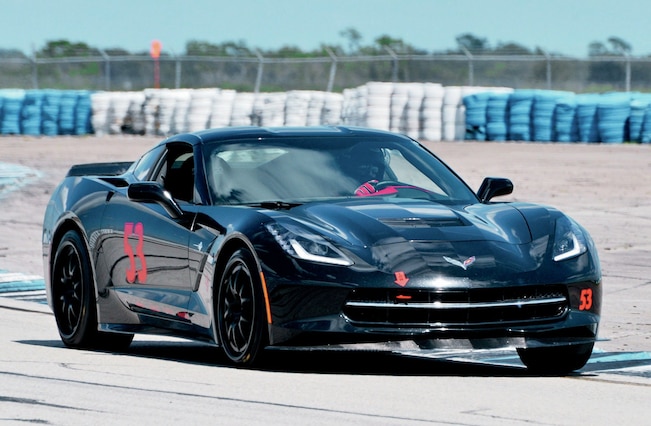 Lieutenant Colonel Bill McClendon spent 20 years protecting our country as a Top Gun fighter pilot. He flew into many of the world’s hot spots during his career and survived without a scratch. His favorite ride was the F-15C Eagle twin-engine air superiority fighter. An F-15, like the one Bill flew, broke eight international climb records. These included accelerating from a dead stop and climbing vertically to 98,425 feet in 3 minutes and 27.8 seconds! The F-15 is capable of topping out at over Mach 2.5 (1,900+ mph). Bill has the need for speed!

In 2004, he was offered a civilian business opportunity so he hung up his helmet and left his trusted F-15. This business opportunity was successful and enabled him to retire. He now lives in Florida and captains a 35-foot offshore fishing boat and attends road racing track days. Bill has owned different sports cars, but never a Corvette. The racing bug hit him in early 2014 when a friend told him about Chin Motorsports Association (chinmotorsports.com). Chin provides scheduled driving days at racetracks like Sebring, Road Atlanta, Watkins Glen, and Homestead. Bill felt that driving on a racetrack would help fill the void of no longer flying a high-performance fighter. At the time he owned a Nissan 370Z and quickly realized it was not the right car for track events. He began researching for a suitable car and decided to buy a Porsche GT3. A Porsche GT3 owner referred him to Rene and Arlene Meyer of Action Imports in Saint Petersburg, Florida (actionimportsrepair.com). The Meyers explained the difference in maintenance costs between a Porsche and a Corvette. Even though Rene repairs Porsches, he and his wife own and track day C3 and C6 Corvettes. They convinced him that a Corvette would be his best choice so he passed on the Porsche.

Bill’s Corvette has undergone a subtle transformation since he purchased it. Here he is ready lap the Sebring track with his new Forgeline wheels and Michelin tires.

This is how Bill’s C7 looked shortly after he purchased it in the summer of 2014.

Lieutenant Colonel Bill McClendon poses by his favorite fighter the F-15 Eagle. He spent many years defending our country in this amazing fighter.

The new C7 appealed to Bill, because like his F-15, it is an advanced design and offers excellent out-of-the-box performance at a reasonable price. He purchased a black Z51 manual seven-speed coupe with the 3LT interior. He told us “I bought the 3LT interior, because my intentions were to use it as a daily driver and go to the track on weekends. The 3LT interior makes the C7 a more comfortable car to drive. However, it has spent more time on the track than the street, so I really didn’t need that package.” He bought it a week before a scheduled Road Atlanta Chin event and found a detailed guide in the owner’s manual on how to prepare the car for the track. One of the recommendations was not to track it before 1,500 miles. Upon arriving at Road Atlanta, the C7 had 1,503 miles on it. His pit equipment was a tire pressure gauge, folding chair, and a cooler. The car did great and he used up the OEM brake pads by the end of the weekend. His only squawk was it needed better seats.

Shortly after Road Atlanta, two Sparco seats were installed by Chris Vallee at Speed Syndicate (speedsyn.com). Chris also installed a Shark Bar from Vette Works to secure the OMP six-point harnesses to the car. Chris finished by doing a track alignment. Since those changes the C7 has been tracked at Daytona, Sebring, Palm Beach, and Homestead and Bill reports that his skill level is improving. He has done 27 track days in six months. He also attended the three-day Skip Barber Sebring basic and two-day advanced driving course. That helped him to improve his confidence and driving skills.

The tow hooks are mounted to the Corvette’s crash bumper beam for strength. The kit includes all of the mounting hardware and instructions.

After the C7 returned from its initial outing at Road Atlanta, Speed Syndicate installed these Sparco racing seats.

Bill has accumulated 27 track days on his stock Z51 brakes and this is the result. The caliper color had changed because of brake heat. The brake pads, calipers, and rotors are being replaced.

He feels that the best C7 strength is the performance you get for the price. You can take your helmet, go to the track, and have a great time. It is extremely balanced and does not oversteer unless you induce that with the throttle. Its biggest weakness is brake cooling. Before his skill level improved, the brakes were adequate, but as he went faster the brakes faded much more quickly. In reality, the average owner is probably not pushing their C7 as hard as he is so they might not experience this issue. The car also exhibits too much body roll even with the suspension set on the Track mode. He plans is to install stiffer sway bars and springs when they become available. Lowering the car is recommended, but that would make it more difficult to drive on the street, so that has not been done. Also, when a front brake cooling package is available, it will be installed.

Bill found out that Van Steel is an authorized vendor for Wilwood Brakes, Forgeline Wheels, Phoenix Racing, and Nowicki Autosport. Van Steel’s business manager and suspension expert Paul Lesinski helped Bill develop a modification plan for his C7. This included adding tow hooks, Wilwood brakes, a Nowicki aero package, Forgeline wheels, and Michelin tires. Regarding tires, he reports that his best lap time on the OEM Michelin Pilot Super Sports at Sebring was a 2:35. Next, Toyo R888 R-compound tires were added and his times dropped to a 2:30. Finally, Forgeline 19x10 front and 19x11.5 rear rims were added with Michelin slicks. The Michelins are 24/65-19 front and 29/67-19 rear medium compound slicks. His Sebring lap times are now 2:25. So these modifications have produced positive results. This C7 has helped fill a void he has had since stepping out of his F-15. It’s not easy driving a car fast around a road course. However, the C7 Corvette is such a great car that it is helping him improve his driving skills in record time. Bill says that they hit a grand slam with the C7. His next stop will be a Ron Fellows Corvette driving school. Good luck, be safe, and thanks for your service!

Danny Dorsett, owner of Van Steel, takes the C7 for a test drive after the track modifications have been completed. The test was successful so Bill headed to Sebring.

Van Steel added tow hooks from Phoenix Racing. The front and rear bumper covers had to be removed to complete this installation.

The front hook mounts to the bumper beam so the front bumper cover needed to be removed before it could be installed. When installation is complete, a small opening in the grille enables the hook to be attached to the bracket.

After the rear bracket is installed and the bumper cover reinstalled, a small factory cutout in the bumper allows the tow hook to be attached.

Upon closer inspection, the Z51 caliper dust covers show extensive damage from the constant track use.

Chin Motorsports held a track day at Sebring International Raceway that Bill attended. His lap times improved enough that a Chin instructor moved him up a class after a check ride.

This Wilwood brake kit will give the C7 increased braking durability at the track.

The C7 exhibits very little body lean as it exits Turn 15 at Sebring. When he first raced at Sebring his time was 2:35. Now he is lapping at 2:25 and thinks he can shave five more seconds from this time.