Smooth as Glass: A ’71 big-block that follows a simple formula for stunning looks 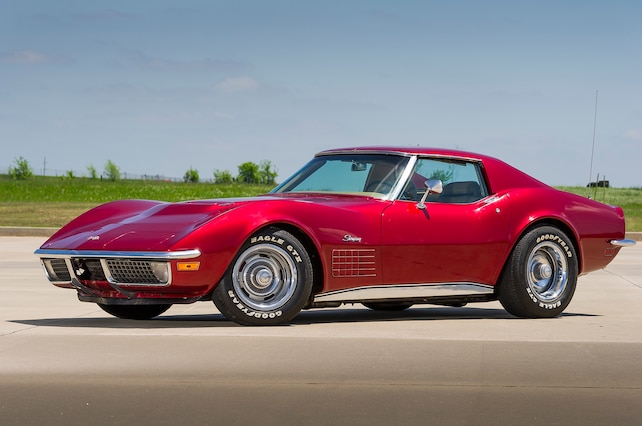 Not that we don’t love those no-holds-barred Pro Touring builds, but sometimes you can really strike a nerve with something simple. To look at Johnny Taylor’s 1971 Corvette, you’d know that it wasn’t exactly stock. For one, they just don’t look that clean 40-plus years later. And for another, that stance is just too perfect. The subtlety of the changes is what really makes this ’71 Corvette drool-worthy.

Johnny Taylor spent 37 years in the family business, a body shop started by his father in 1947. The ’71 Corvette is the culmination of a lifetime perfecting his craft. “I did 95 percent of the work, other than the suspension. I wanted this to be as nice as I know how to make it. Corvettes are not the easiest to make perfect.”

Besides customer cars, Taylor was very familiar with C3s, having already owned a ’69 (his wife’s). He stumbled across the ’71 some 8 years ago in his search for a car to build. Knowing that it wasn’t a numbers-matching car and in need of some TLC, it was a prime candidate for an unfaithful restoration. It had been wrecked in Arkansas when the factory 454 and Turbo 400 were removed.

“Sixteen years ago a guy in Texas bought it, separated the body from the frame and did the suspension kit.” The front springs were swapped for 450-pounders made 1-inch shorter, for 4 inches of total drop in the front with the shorter Goodyear Eagles (Taylor later installed). The rear spring was replaced by a 340-pound spring that he says is correct for the 454, though 44-pounds lighter than factory. The new springs in combination with Bilstein shocks, he said, allow the ’71 to drive far better than his ’69.

Amidst the suspension modifications, the former owner also painted the frame and started upon the long process of smoothing out the fiberglass body. As the story goes, his wife threw a fit because of all the dust and fiberglass splinters. The gentleman was forced to sell the ’71 Corvette, and handed over the keys to Taylor. “I have great respect for guys my dad’s age that worked on fiberglass all the time. It will have you itching like a man on a fuzzy tree. Even with a paint suit and mask, it eats you up. But it was much cheaper for limited-run cars like the Corvette.”

With Taylor’s skilled hands the C3’s body started to take shape. In love with the factory body lines, he had every intention of keeping them at all cost. This included the big-block hood, despite being tied to the problematic vacuum system and in need of repair from a frozen latch. The fiberglass work continued on the one-piece front end, which was treated to new headlights, inner fenders, core support, and emblems. The bumpers were rechromed and the windshield was replaced when all was said and done.

Since this was not a stock restoration, there was no pressure to stick with a factory paint color. “I like bright contrast colors,” Johnny said. His choice was Monterey Red Metallic, a C6 color that was characterized as Medium Clarrett Pearl by the paint manufacturer, Martin Senour. “I used a tri-coat – base, mid, and clear – so it’s not a single color. The edges are lighter than the base. I hate doing it commercially, but it gives the car motion. It looks like it is moving when it’s sitting still. It’s an illusion that single-stage paint can’t do.” Though on the 2006 and 2007 Corvette, Monterey Red is maroon from most angles, the three-stage paint and contrast of the chrome bumpers give it a whole new dimension that even varies per photograph (let alone in person).

According to Taylor, the secret to getting good adhesion to fiberglass is in the primer. “You need urethane primer/sealer. The sun eats them up. Once it’s primed and sanded it will hold up good. Fiberglass holds heat more. Once the ’glass gets hot it stays hot longer. Nobody has trouble like they did 30 years ago. Urethane primer made the difference. ’Glass is much denser, thicker, and less forgiving than SMC [on newer cars].”

Moving on to the cabin, Dynamat was used throughout for a quiet and comfortable ride. The carpet and leather was replaced with Light Saddle upgrades from Corvette Central. Keen observers will note this color was from the ’70 (not the ’71) model. Restoration continued with a new dash, center console, and window regulators. The radio was replaced with a vintage looking unit outfitted with modern upgrades such as a USB input, and the same theme was carried over to the Vintage Air system that keeps the 64-year-old retiree cool during hot Oklahoma summers.

With the chassis in such good shape, Johnny turned his attention to the few untouched mechanical items. The 454 was bored 0.030 over, treated to a fresh set of hypereutectic pistons and what the builder called an “RV” cam, so this setup is a little hotter than the factory LS5. The factory carburetor and intake manifold were kept to clear the stock hood, and the stock iron heads and rotating assembly were adequate enough for continued employment. Taylor plug wires and long-tube headers mated to a stock 2.5-inch exhaust from Eckler’s finished off the healthy sounding big-block. The 454 was connected to the Turbo 400 along with a new radiator with electric fans, new gas tank and lines, and it was ready to fire. Johnny swears the best modification was a Jeep steering box conversion, which eliminates a dead spot in the steering, once again proving the brilliance of this C3’s simplicity.

“I never intended to show it, but Ron Page at Heartland Customs convinced me.” Page was also influential in the use of the Vintage Air system. “It took 24 months to build. The further I went, the better it looked and the more I wanted to do.” The end result of nearly doubling his original build budget, though, was worth it. Johnny has more car show trophies than he can count. But the ultimate reward is the realization of a dream.

“I was 58 before I could afford a Corvette. I wanted to have one when I was 20 years old, but college cost about the same.” Despite owning a C6, which he says is “superior in every way,” the feelings he has for the ’71 go much deeper. As he gazes at the fiberglass panels he shaped by hand like a sculptor, into the mirror-like reflection of the dark red paint … Johnny sees the reflection of a much younger man – a man that would create many things over a 37-year career. But only one masterpiece.