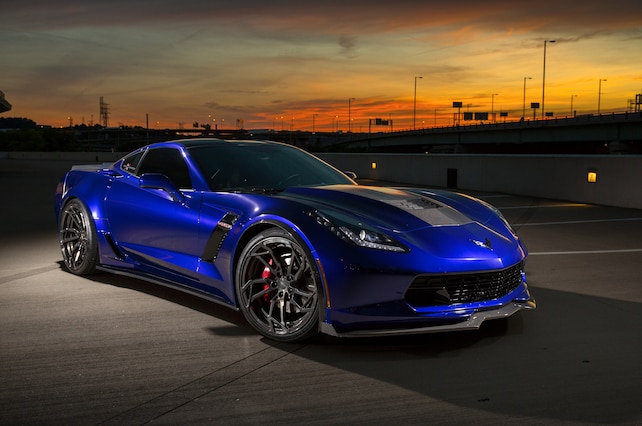 To the engineers and powers that be at Chevrolet, the 2015 Corvette Z06 is the end-all, be-all Corvette. But, let’s just say their standards are a bit different than ours. They are concerned with fuel economy, emissions, performance benchmarks, sales, and things that will make a profitable product in their lineup. But as enthusiasts with no such concerns, we just want the most badass ride we can dream up. For many, that includes big-block-type cubes and a healthy chop at idle. Combine that with the cutting-edge Gen V V-8 engine and the C7’s exotic lines, and you can certainly get our blood pumping.

“When I purchased this Z51 2LT Corvette at the end of 2013 from Rick Conti at Coughlin Chevrolet, I had already been working on the design for our carbon-fiber aero kit and had a modest list of mods that I wanted to do to the new direct injection Corvette — mostly bolt-on stuff,” said Ben Herndon, co-owner of Weapon X Motorsports in Cincinnati, Ohio. “I had not planned on keeping it long since I had a Z06 allocation secured; however, the further I went with the project, the more attached to the car I became. I already have a couple of supercharged cars, so I wanted to do something different. As the rumors floated around that the Z06 would be supercharged, I decided to keep the big-block alive and push forward with the engine Chevy wanted to make but apparently couldn’t due to the 2016 CAFE standards.”

Ben and partner Blake Leonard went to work stripping the 1,500-mile Stingray. The block was sent off to five-time Engine Masters champ Tony Bischoff at BES Racing Engines for one of the first re-sleeved Gen V LT1s. Like its predecessor, the LT1 accepted Darton sleeves with a 4.125-inch bore. Custom Wiseco pistons were to be slung by a Callies Magnum crank and Ultra rods. Brian Tooley (BTR) spec’d a healthy 238/258 duration nitrous cam with 0.650/0.630-inch lift and an overdrive fuel pump lobe, capable of supporting the added volume for E85 fuel. COMP Cams ground the cam as well as supplied the phaser limiter and upgraded fuel pump spring. Landspeed Development was in charge of CNC port work and hand-finishing of the LT1 heads, along with up-fitting Ferrea 2.25-inch intake and Manley 1.65-inch exhaust valves. These heads flow an astounding 405 cfm. Landspeed even ported the factory intake manifold for an additional 30 rwhp from the high-revving, 13:1-compression LT1. The valvetrain was finished off with BTR valvesprings and a COMP Cams trunnion upgrade, needed for the big cam.

To complete the engine, Weapon X started with a Nitrous Express direct-port system. The single-stage “wet” kit currently puts out around 300 hp using .031 nitrous jets. A stand-alone fuel system, for nitrous enrichment, and dual carbon bottles reside in the hatch area. The NX Max4 progressive controller commands the solenoids. With the engine dropped back on the cradle, Weapon X ported the stock throttle body and bolted up American Racing 2-inch headers. When returned to its rightful place, a Billy Boat Fusion 3-inch exhaust and a Halltech CKN carbon-fiber 100mm cold-air intake would help the 427ci LT1 breathe while resisting heat-soak. A 160-degree thermostat from LMR and a DeWitts radiator also aid the LT1’s cooling needs. “We’ve had to do some heat shielding on the Halltech intake because the new-generation Corvettes are tilted forward so the hot air is blowing right on the intake tube, versus previous years of the intake remaining cool out front and the bridge going over the radiator. We also did some custom ducting from the former brake duct inlet to channel fresh air into the intake.”

Guru James Short of ShorTuning used HP Tuners software to create a base tune in the factory E92 engine controller. While he had certainly tuned a few C7s by that time, nothing quite this radical even existed. Anywhere. Between the big cam, big cubes, and big stall, it took a steep learning curve and plenty of tweaking to get the C7 dialed in. Ben and Tracey Scott of Cincy Speed have since assumed the laptop. On engine it made just shy of 600 rwhp, but during initial testing it was making only 775 hp and 767 lb-ft of torque with nitrous. This was good enough to run 10.0 at 141 mph. With the larger jets and more tuning, it now makes 884 hp and Ben is anxious to get back to the track.

With 9-second times on the horizon, it should come as no surprise that Ben added a four-point rollbar from RPM Roll Bars. The interior is otherwise mostly stock, aside from Lloyd custom Corvette Racing floor mats. The exterior, on the other hand, is far from stock. The original Blade Silver coated body panels are a distant memory, as the Weapon X widebody kit was treated to PPG Midnight Blue Pearl.

“While the car was down over the winter, I dropped it off with Spade Kreations and discussed what I was after. Rick and his team literally stripped the car down to its shell and went to town turning the entire car around in just a couple of weeks so they could take it to Cavalcade of Customs. I was just going to have the parts shot in OEM Blade Silver, but Rick suggested we may as well do a custom color, too. I put the color choice up on Weapon X Motorsports’ Facebook page and let the followers decide between blue and orange,” Ben said. “I was torn and blue won. Luckily, I’d always been a fan of the deep Admiral Blue color of the C4 Corvettes, so I loosely based it around that color, deepening it and adding a little purple.”

The freshly painted and clear-wrapped widebody kit was joined by a carbon-fiber Weapon7 hood, spoiler, splitter, and rocker blades installed prior to the makeover. “Our Weapon X Motorsports carbon-fiber really set the Blade Silver paint off and we unveiled our American-made carbon-fiber WEAPON7 splitter, rocker blade, diffuser, spoiler, and hood package at the 2014 National Corvette Museum Bash, where Tadge himself voted the car his celebrity pick for the car show winner. He loved the wheels, which at the time were the PUR LX12 three-piece wheels,” said Herndon.

Since then Ben went to great lengths to create an even more unique set of wheels. “I reached out to PUR Wheels and explained I wanted them to make a two-piece wheel for me to get the outer look of the monoblock, but the centered register of a three-piece wheel. They had never done this before, but they did it and the result was the PUR RS05.MV2 with a Gloss Black Diamond outer and Chrome Bronze inner in sizes 20x10 and 21x12.5 with Pirelli P ZERO NERO 295/25R20 and a whopping 375/20R21. The concavity on them really sets the car off.”

Any C7, let alone one with such exquisite one-off wheels, a widebody kit, and the full carbon treatment, is inextricably exotic. Yet as this genre has moved towards boosted small-displacement engines (even within the Corvette family), having a big-cube Corvette with nitrous and a big thumping cam is incredibly refreshing. What’s old is new again. “The Z06 is an amazing car; however, the C7 427 is truly a unicorn.”