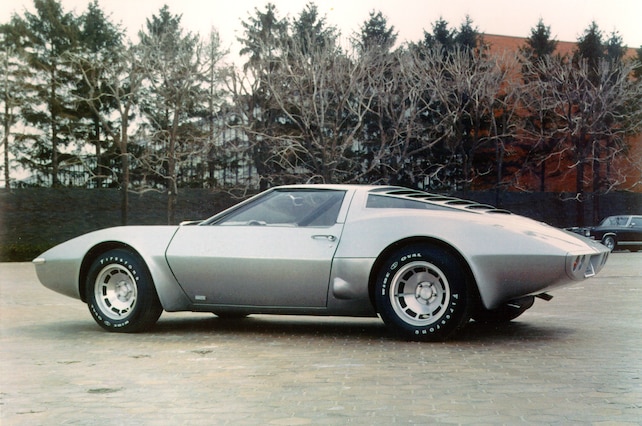 Between Car Life Magazine and Road & Track, the Corvette community was almost totally convinced that this would be the 1973 Corvette! Obviously that didn’t happen, but it was still a great day for Corvette fans at the New York Auto Show on April 2, 1970, because no one knew that Chevrolet was showing a mid-engine Corvette concept car. Mid-engine Corvettes were always lurking in the shadows with that, “Hey, sailor …” smile. But the XP-882 mid-engine experimental Corvette show car had drop-dead looks and it seriously looked like it “could be” the next Vette. It was everything a Vette lover would want and then some. Best of all, Ford and AMC never knew what hit them.

Duntov’s design team started working on the XP-882 in 1968. Two prototype cars were built around small-block Chevy engines, with plans for big-block power and eventually all-wheel drive. Zora had been playing with AWD since his experimental ’64 mid-engine CERV II. This shows just how forward-looking Duntov’s thinking was. The styling group designed a new look that was crisp, edgy, and low-slung, yet it “looked” like a Corvette, but wasn’t “Mako.”

Chevrolet General Manager John Z. DeLorean stopped work on the XP-882 in August 1969, to pursue making Corvettes more profitable, using the new, inexpensive Camaro chassis. DeLorean was met with fierce resistance from sales, styling, and engineering, NOT to take the car in that direction. Then, Duntov was stunned when he learned that Ford was buying Italian carmaker De Tomaso so that it could market the new mid-engine Pantera as a “Ford.” And, to make matters worse, Zora also learned that little AMC had designed a mid-engine car that was to be made by Italian carmaker Bizzarrini, plus Mercedes was working on its C111 mid-engine car. Something had to be done!

Duntov showed Bill Mitchell and Chevy’s Chief of Engineering Alex Miar his mothballed XP-882. The decision was immediate — “Get the car into the New York show!” The XP-882 was quickly painted silver and dressed as a show car. The interior was utilitarian because the XP-882 never had a chance to get a show car interior – there wasn’t time. When the show opened, attendees were shocked, especially Ford and AMC. The car magazines were all over the XP-882, initiating a feeding frenzy of speculation. Enthusiasts had been lusting for a smaller, lighter Corvette for years, and the XP-882 looked like it could deliver. Compared to a ’70 Corvette, the wheelbase was 2.5 inches shorter, the length was 8 inches shorter, the width was 5.8 inches wider, and at 2,595 pounds, it was almost 700 pounds lighter. Of course, this was a prototype and not a fully-featured car.

Mid-engine sports cars had an exotic glow about them, but Zora’s surprise exotic Corvette took it to the next level. The powertrain was a combination of a transverse-mounted, 400-cid small-block engine coupled with a silent chain-drive to an Olds Toronado Turbo 400 transmission, fitted with bevel gears, connected to a stock Corvette rear. “Parts bin” yes, but very clever. Wheels were spun-aluminum, with vent slots similar to what would become available in 1976, and tires were E60x15 on the front and G60x15 on the rear. The rest of the suspension was made from production parts.

After the overwhelmingly positive reception, DeLorean approved the funds to develop a big-block, four-speed version of the car. Motor Trend enthusiastically reported, “Chevrolet roared out of the sun with the throttle wide-open and the wind shrieking, and watched their tracers stitch into the shining sides of the new De Tomaso …” For a little while, it was all sunshine and unicorns.

But, a few things got in the way. GM President Ed Cole, who was always thinking “over the horizon,” purchased a license to develop the Wankel rotary engine. Duntov was tasked with creating a high-performance version for possible use in a Corvette. Zora delegated this nightmare task to the capable hands of Gib Hufstader. Duntov then had to relinquish one of the two XP-882 chassis to Bill Mitchell to work out a new look for the 4-Rotor concept that was first shown in 1973. The other XP-882 chassis became the R&D, all-aluminum Reynolds Aluminum Corvette that weighed 500 pounds less than a standard Corvette. So, just like the running Mako Shark II, the handsome XP-882 was taken behind closed doors, chopped up, and made into something else.

Mid-engine sports cars were the stuff of small, exotic European carmakers. But between the first Arab Oil Embargo, a recession, the rotary-engine interruption, and the sales success of the production Corvette, the XP-882 — or any other mid-engine Corvette — didn’t stand a chance. But for a time, it sure was exciting. Forward-thinking just couldn’t overcome bad timing.

This Le Mans style 1970 Corvette at SEMA 2016 features cantilever suspension front and rear and is built for racing.