100,000 Miles of a Hellraising in a Lightly Modified 1962 Chevrolet Corvette

The Terrible Two: Taking on the Neighborhood in a ’62 Hardtop 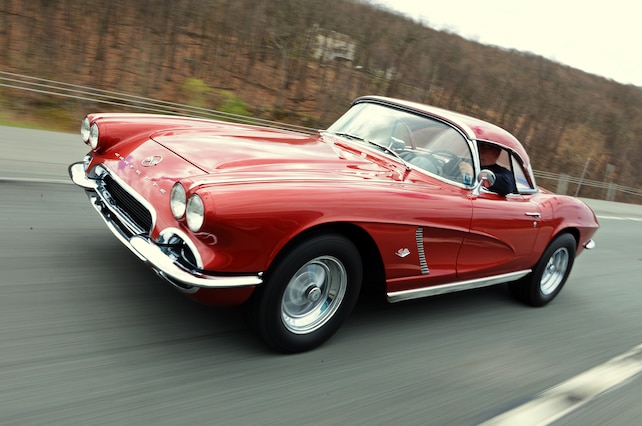 It was a typical Saturday for the young car aficionado Mike Walsh. The 18-year-old was speedily on his way to work at Newton Speed Center (NSC), a top-notch performance center and a Jersey hot rodder’s hangout supreme. His mode of transportation this day; his ’62 Corvette … a car which he had saved two years earlier from a swampy grave in nearby Pennsylvania. Life was going great for Mike, having both a job that he loved and a sweet ride to get him quickly from point A to point B.

Well, things could have been better. After only a few short months on the road, Mike had packed his glovebox with enough speeding tickets to choke a Clydesdale … and that’s something that would give the state of New Jersey good measure to remove his driving privileges. Yeah, Mike had a leadfoot, and there was no denying that the boy just loved to drive his Corvette fast. Needless to say, the local cops knew who Mike was, and were well aware of his standing within the State.

That day on his way to NSC, Mike crested a knoll on a rural two-lane county road and spotted his buddy coming toward him in his Chevy pickup. He noticed Mike, too. Mike jumped on the small-block, and his buddy did the same. As they drew close, they both decided to switch lanes, with each vehicle driving on the wrong side of the road. The boys cheered as they flew by each other on their right sides at speeds somewhere around the three-digit mark, a stunt that can make your heart stop ticking just thinking about it. However, if that wasn’t enough to get your blood pressure up, Mike soon realized that a New Jersey trooper was just ahead, keeping tabs on the speedy truck driven by his buddy.

The trooper passed Mike and immediately spun around, flipped on the lights, and gave chase. Mike knew he could stay and lose his license right there, or make a break for it and have a chance to drive tomorrow. Mike’s right foot made that decision without hesitation, and the 350 screamed under the strain of its throttle cable. Mike flew ahead out of sight and then turned off on a rural road. Thinking he might not outrun the black and white, he ducked between a corn silo and a barn and waited it out.

Mike got to work that day and immediately parked the gold Corvette behind the shop. The decision was made then and there to sideline the car at this point. It was just too risky to take it out while the cops were looking for him. There, Mike disabled his ride, tore down the car, and over the next six months stripped the paint. He took off the aluminum slots, added a new coat of Honduras Maroon skin to the flanks, and added a fresh set of Cragar mags to all four corners.

After a half year of lying dormant, Mike felt it was safe to get the newly transformed car out on the road. That first time out, Mike hit the road carefully, driving like a saint on the local byways. Well, it didn’t last long for the newly reformed, well-mannered driver, as he was pulled over after just three miles. The law had kept their eye on the shop. They knew. You stick out like a sore thumb in rural Jersey when you’re young and have a hot car. Mike learned that the hard way!

Mike Walsh was born into the Corvette family. His father, Don, had a repair shop in Brooklyn, New York, and was one of the founding members of the Brooklyn Hot Rod Association. Don’s club, the Road Gents, was one of a dozen or so clubs that joined forces under the banner of the BHRA. Don had a sweet ’59 Vette back in those days, and young Mike was just blown away by the cool hot rodded first-gens that his dad and his buddies drove.

As Mike got older, his love of Corvettes grew. By now, the family was living in Bergenfield, New Jersey, which interestingly enough turned out to have its own thriving hot rod and Corvette scene. Jake Brecher and his killer ’62 Quicksilver (which has twice graced the pages of this magazine) and his brother David’s ’62, were top Vettes from the town, and regularly cruised the suburban main streets of the small New York City suburb.

By the time he was 16, Mike was ready to get his own car, even though he still wasn’t old enough to drive in his home state. When his parents divorced years earlier, his mom stayed out in rural Sussex, New Jersey, where they all lived temporarily as a family. It’s out there in the “sticks” where Mike would initially lay eyes on his first Corvette. “My buddy Willy actually spotted the Corvette first, and bought it. But when a nicer one came up for sale, he gave me the option of buying it … I jumped on the deal,” states Mike.

Well, it was far from a cream puff. The ’62 had been parked outside in a muddy swamp, and all but forgotten for the last decade. The car started life as a rare, factory black hardtop only car, stuffed with the potent 327ci/340hp engine with a four-speed setup hooked to it. Legend has it that the car was bought to road race, and when the owner was called for duty overseas in Vietnam, courtesy of Uncle Sam; the owner parked it. Supposedly, the soldier’s brother took the small-block and trans for himself and left the carcass.

When Mike got to the car, it was in a sad state. The earth was slowly reclaiming the undercarriage, and the body was picked over and disassembled. But there was enough to work with. He and his buddies pulled the ’62 out of its muddy resting spot and trailered it back to Bergenfield.

Over the next two years, Mike worked on his crusty ride. He found a used 350 and put that in for its new power source. It was nothing special, and was pretty much at the end of its useful life. For parts, Mike found that he could reuse parts that he claimed while helping fix Corvettes for the NGCA (Natural Glass Corvette Association) out of nearby Denville. These discarded parts were still good enough for Mike’s car, and saved him a lot of money in the long run.

For styling cues, Mike would not have to look further than what was already out there in the early ’80s. Instead of painting the car its original black, Mike went for a blinding gold tint, all the rage back then. And for rims, polished Ansen slots were the wheels of choice. Mike kept the interior stock, and since there was no convertible top with the car, the hardtop stayed on it from the start.

As Mike built the car, he couldn’t help taking the car out on occasion. He remembers vividly driving the car on the rural backroads before the car was finished … and without a braking system! Yes, no master cylinder, no shoes, nada. Mike downshifted to bring the car down to a creep.

He decided not to waste money on a daily beater when he turned 17; the legal age to drive in Jersey. Instead, he saved his money and put it all into the Corvette. By the time he was 18, the car was on the road. The old 350 was on its last legs, but now, since he was working at NSC, he had access to parts and knowledgeable hot rodders. Mike soon built up a stout 350 for the car, and dumped a 3.70 posi out back. It transformed the Vette into a totally different ride. It was a beast out on the streets, and Mike, well, he was this beast’s master.

So after his run-in with the local cops, troopers, and the state’s Motor Vehicle Division, Mike made right and got his license back. I can’t say that Mike learned much from that experience, as his driving techniques didn’t change much over the next years. But he did get wiser. Mike says that the car just begged him to drive it hard, and he did. Every day.

The ’62 Corvette was his daily driver for the next 10 years. Rain, sleet, snow, hail; didn’t matter. Mike was on the road and in the Corvette. However, soon, a truck would come into his possession and was a welcome alternate driver during the bad weather that Jersey can experience. And of course, Mike couldn’t pass up other Corvettes for sale. He started buying, selling, trading, and keeping a small arsenal of Gen 1 and 2 cars.

Mike decided his passion for Corvettes was going to be his livelihood. So he opened the Early Vette Shop in Shohola, Pennsylvania, a restoration shop that specializes in 1953-’82 Corvettes. Mike’s knowledge of Chevy’s sports car is only eclipsed by his passion for bringing these cars back to their former glory.

In 2002, Mike decided that his first Corvette needed a makeover. So the car was dismantled, and over the next four years it was slowly brought back to its former glory. Mike stripped the car to the ’glass and laid on a new coat of the Honduras Maroon, a color that had really grown on him over the years. All the essentials were gone through. Mike decided to keep the drum brakes on all four corners. A 4.11 factory rear was added out back.

For motivation, Jeff Saaf from Saaf Racing Engines out of Lackawaxen, Pennsylvania, built up a strong roller engine. The small-block has heavily massaged Vortech heads and an Edelbrock Performer RPM Air-Gap intake topped with a Holley 670 Street Avenger carburetor as its primary add-ons. Mike loved the sound of original small-block exhaust manifolds, so the headers were removed in favor of these. A stock exhaust leads the gasses out back.

A Muncie four-speed with a Centerforce clutch does the shifting, and an MSD ignition produces the spark. The interior is stock, minus the big Hurst shifter. Wheels of choice; the car rides on the set of Cragars he put on it back in 1981. Mike maintained the wheels over the years, constantly cleaning off the harsh road chemicals that the Northeast is famous for. The 15x7 wheels up front and 15x8 out back are shod with BFGoodrich T/A Radials.

Mike drives the Corvette whenever he needs to connect with his inner youth, which is often, as he’s logged over 100,000 miles in the ’62 Corvette. When he slides behind the wheel and straps in, this Vette transfers him to a great time in his life … though the local guys in blue are happy to see he has other tamer rides in his collection now. But he says these early ’glass-bodied Chevys will always be his favorite. The nine Corvettes in his collection lead me to believe that Mike’s word is the honest truth.