Or…a sleeper by any other name 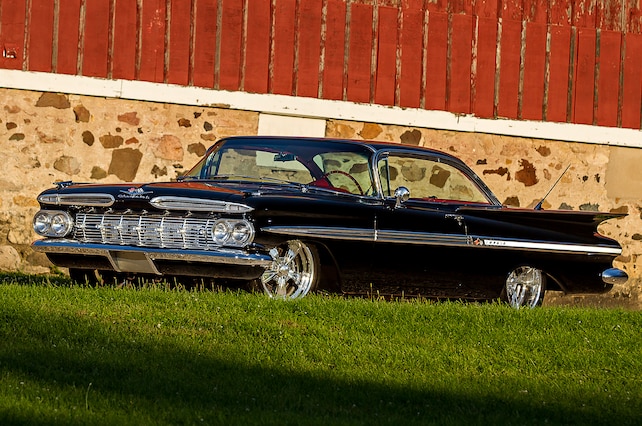 “I’ve always been a fan of X-frame cars and really liked the lines on the ’59s, and of course the taillights. I’ve owned a couple of ’61s and am currently building a ’62 Bel Air,” confessed LS tuner Tom Izzo. Although he has this fascination with early iron, he makes a tidy living from building and maintaining current LS-powered automobiles and trucks at his company, Speed Inc. in Schaumburg, Illinois. What a fine juxtaposition. All that modern technology infused with arguably insane sheetmetal. Izzo’s rendition goes further: It’s the perfect sleeper, a whimsical, pimped-out persona with barely a hint of a ferocious drivetrain that would seem more at home in a hot-lap Camaro or demented Corvette.

He’d relinquished his ’69 Camaro “for something bigger that I could cruise in with my wife and two girls more comfortably,” he explained. “I was searching for something that didn’t need a full restoration.” He found his lab rat in Massachusetts, certainly no haven for rust-free constitution. The car was sound, unbelievably straight, but as an original, it was frustrating and no fun to pedal. It just didn’t drive worth spit. Tom wasn’t enamored of the tuck-and-roll interior, either. All of it would have to go. Izzo sets it straight: “The ready-to-drive cruiser pretty much turned into a rotisserie restoration, with massive updates.”

He gave credit: “Dean Black handled the meticulous restoration of the sheetmetal, floors, and the paint. Jim Moran did the turbo system fabrication and the tuning. Jon at Loko Coatings [Oak Lawn, Illinois] powdercoated the frame and everything else.”

Starting in the basement, Speed rehabbed the original frame but made no further alterations. After it was scoured and powdercoated, they applied the RideTech suspension assemblies: A-arms, air springs, adjustable shocks in front, and then the companion pieces for the rear. Speed retained the original spindles. They chose a Currie 9-inch with mandatory traction device and a 3.70:1 ring-and-pinion. Considering the Impala’s dark side, they included Wilwood six- and four-piston calipers on 13-inch discs all around. The Imp’s rollers dazzle. Here are 18x9 and 18x10 Intro hoops slathered with serious Nitto rubber: 555 255/45s stuck on point and sticky 555R 305/40s stuck on the smoky end.

All righty then, so this thing needs drag race rubber on the street, huh? Beneath those black batwings beats the heart of a young vampire. On a mild tune-up (13 psi boost), the 370-inch engine produces 718 hp at 6,600 rpm and 702 lb-ft of pavement-waffling twist at 5,200 rpm. The iron 6.0-liter short-block was assembled by Eric at Advanced Engine (machine work, stock crankshaft, Callies connecting rods, and Diamond 9.5:1 pistons); Dan Marks at Speed did the rest, which was considerable.

He poked the block with a Speed-spec hydraulic COMP roller phased with 0.581-inch lift and 225-degrees of duration on both valves and installed it with SLP double-roller gear under the stock cover. He settled down some ET Performance 215-cfm runner cylinder heads fitted with 2.04/1.60 valves and covered them with an uber-efficient LS6 intake manifold. Fuel is provided by twin Walbro 255-gph pumps, and the mixture is ignited by a squad of truck coils. Dan modified a fourth-gen Camaro sump to clear the frame and slipped an SLP oil pump inside it. From there, Speed’s Jim Moran and Dan Marks designed and plumbed the ducting and air-to-air intercooler for the twin 55/57 Innovative Turbo hair dryers. To make the engine run, they incorporated a Speartech LS harness as well as a GM 3-bar oxygen sensor. They built the 1 3/4-inch primary pipe header stands, mounted the Griffin aluminum core, and once the engine was in the chassis, strung the X-pipe and the 3-inch mild-steel Loko black-coated exhaust system.

Knowing all the while that he would eventually become “used to” 700 lb-ft of torque, Izzo knew that he’d eventually up the ante, so he considered only the massive 4L80E as built by Finish Line Transmission in Wood Dale, Illinois. The big slushbox was imbued with a 3,000-stall Precision converter, but the valvebody is a standard item. Speed retained the two-piece driveshaft configuration and farmed the job to Suburban Driveline in nearby Villa Park.

Izzo’s pal and Speed associate Dean Black rehabbed and smoothed the exterior expanses and applied the mirror-like PPG Black in several stages. Badger Plating in St. Francis, Wisconsin, did the chrome plating and Dave Kosman brought all the stainless spears back to life.

On the inside, things are exactly as they seem. The crimson ACC carpeting underlay is a substantial field for a very tidy tableau of factory appointments and a smattering of the aftermarket. Izzo zeroed in on seat covers, door, and side panels as faithfully reproduced by Ciadella Interiors in Tempe, Arizona; Ken’s Interior did the fitting and installation. The seats, steering wheel, shifter, etc. were restored from original, and while that bleat box in the middle of the dash might appear stock, it’s really an Antique Auto Radio unit fitted with an iPod input. Speed secreted the controllers for boost as well as the RideTech system behind the glovebox door. Izzo eyes Classic Instrument meters.

Can you feel it coming up behind you? Is this cat serious? Top dropped, tires boiling, maniacal glint wide in his eyes. Keep saying it’s just a mirage, right before that dusky ark blows by like you were chained to an oak tree and unravels the Nittos straight into next week. You’ve just been fanged by Pimpala. Meanwhile, over in a quieter part of town, Tom, wife, Taya, and the kids Izzo cruise like creampuffs, reveling in interior acreage and the heavens unobstructed above their heads.

1959 Chevrolet Impala - The Car Next Door