Conceptualized: Nowicki Autosport’s Concept7 Advances the Legacy of a Respected Builder and Designer 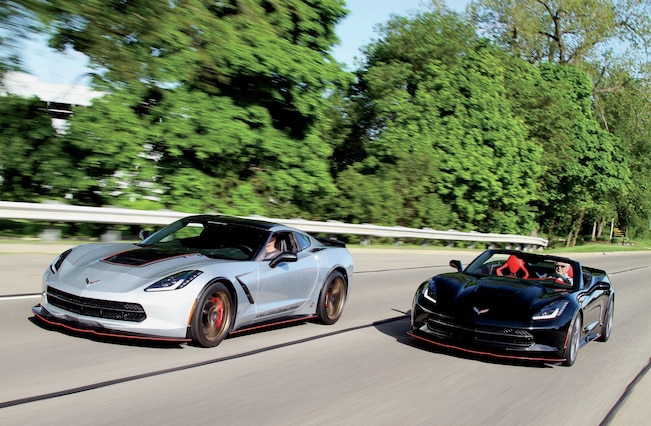 Jeff Nowicki is a designer at heart. He’s also an accomplished Corvette racer, but deep down he’d rather be in his studio, shaping clay, studying proportion and balance, and crafting new, racing-inspired identities for Corvettes.

He’s been doing it for more than 25 years, starting as a sculptor at GM Design, and through his previous venture Specter Werkes/Sports, where he channeled his creativity into his vision of track-inspired, premium-minded Corvettes: the C5- and C6-based GTR models. Specter Werkes built about 40 of them, along with the popular line of Group 6 bolt-on components.

Nowicki Autosport is his latest venture and it’s focused on enhancing the looks and handling capability of the C7. Some would argue there’s not much left to add to either category, but Nowicki’s 2013 debut of the Concept7 proved there was. It earned two coveted Chevrolet Design Awards—Best Chevrolet Corvette and Best New Chevrolet Accessory—for the collection of carbon-fiber exterior enhancements that debuted on the car. It also wore Mobil 1 graphics, an acknowledgement of Nowicki’s longstanding relationship with the company that has sponsored a number of his race cars over the years.

“The launch of the C7 Corvette seemed like the best opportunity to make a statement with Nowicki Autosport,” says Nowicki. “There was also risk in it, because with a car as ‘holy’ as a new-generation Corvette, it is very easy to polarize and turn off enthusiasts if you don’t get it just right.”

With a silver Z51 coupe ordered and delivered through Colorado Corvette specialist Purifoy Chevrolet, Nowicki had only a few weeks to design, model, produce, and install the components before the big convention in Las Vegas—and the gamble paid off unquestionably. In addition to the SEMA design awards, Mobil 1 was so thrilled with the Concept7, they commissioned another for a national sweepstakes car. It was awarded last summer at the National Corvette Museum’s all-new motorsports park, where Nowicki took the finalists for hot laps in his Concept7.

“Mobil 1 has always been a tremendous partner and to have their sweepstakes grand prize based on our design was a hell of an honor,” says Nowicki.

“I just loved the aggressive styling of the Concept7. It was exactly what I wanted,” says Bloomquist. “[Nowicki] nailed the proportions just right, especially the wheels-to-body relationship, which makes or breaks a car’s appearance to me.

Nowicki had just completed the Concept7 in time to make the SEMA show, so when Bloomquist asked for parts, there were none in production at the time to send him. When Nowicki Autosport finally started manufacturing carbon-fiber parts en masse, Bloomquist and Nowicki chatted extensively about the design direction for the black convertible.

“It was clear Jeff thought long and hard about every aspect of design—and he even steered me away from the original idea I had for the finish of the wheels,” says Bloomquist. “In retrospect, he was 100 percent correct and I appreciated his candor and personal involvement.”

Based on that counsel, Bloomquist asked Nowicki Autosport to handle the entire buildup of the car, shipping it from his Wisconsin home to the Detroit area for the work. Serendipitously, the car also served as the guinea pig for the company’s next C7 component: leather-covered inserts for the convertible top tonneau cover. Like the other Concept7 parts, they proved devastatingly effective, lending a more finished and refined appearance to the car when the top is down. Nowicki matched the color and material of the factory leather seat covers perfectly.

We stopped by with our cameras just as the finishing touches were being applied to Bloomquist’s car, then cajoled him and Nowicki—with his original Concept7—into a blast up Woodward Avenue, in suburban Detroit, for some photos.

An OE-level supplier produces the parts for Nowicki Autosport, using lightweight, premium-quality 3K twill carbon-fiber material, along with vinyl ester-infused resin. That’s industry-speak for carbon-fiber cloth with 3,000 filaments per strand and the classic, rich-looking layered twill pattern rather than a more basic—and cheaper—checkerboard pattern. And for those without a chemical engineering degree reading this, the vinyl ester-infused resin gives the parts exceptional strength and appearance attributes. They are clearcoated hand-polished, too, for that deep, wet look.

Although the A-pillar, grille bar, and vent inserts are strictly cosmetic enhancements, the splitter, rocker moldings, and adjustable rear spoiler were designed to balance their aesthetic appeal with a performance enhancement on the track.

The wicker on the rear spoiler, for example, offers 25 mm of vertical adjustment, enabling fine-tuning for the requirements of different tracks, while the wheelhouse extensions provide the necessary coverage for wider wheels and tires. The Concept7 cars Nowicki has built to date have worn 275/30ZR19 front and 305/30ZR20 rear Michelin Pilot Super Sport tires, all riding on custom HRE P101 19x9.5 front and 20x11 rear wheels.

That’s a full 1-inch wider, front and rear, than the wheels used on the factory Z51 Performance Package. And compared with the Z51 package, the tires are 30mm wider in front and 20mm wider in the rear, giving the car noticeably more contact patch on the tarmac. Combine that with the downforce enabled by the splitter and rear spoiler and Concept7 promises to stick harder in corners than those speeding tickets in your insurance agent’s computer.

Nowicki Autosport also worked with Hotchkis to develop a unique, adjustable stabilizer bar. Nowicki’s car is also lowered in the front and rear. Retaining the stock springs and spring eye bolts and simply cranking them down as far as they would go did the trick. It’s a surprisingly simple yet effective tip that gives the car a more aggressive presence.

“With more than 300 miles of track time, the Hotchkis bar has proved to be a great tuning tool that also provides the greater balance we were looking for on the track,” says Nowicki. “We also change the factory Dexos motor oil to Mobil 1 15W50 for track days, which is recommended by GM.”

Spending a session at Waterford Hills Road Course, near Detroit, we can attest to the enhanced grip the wider wheels and tires provide. It’s deceptive performance, too. There’s no body roll or protest from the tires, which are far from their limit at mostly posted speeds. A few minutes in, say, a Z51-equipped C5 will remind you how far Corvette performance has progressed and how much the right rolling stock will add to it.

The Concept7 also stops with physics-defying speed, thanks to a set of 380mm (15-inch) Brembo GT brakes, featuring slotted rotors, six-piston aluminum front calipers and four-piston rear calipers. As the original-equipment supplier to the C7, the company is in a better position than any other when it comes to upgraded brakes. The greater swept area of the approximately 10-percent-larger brakes (compared to the Z51 package) complements the car’s greater cornering prowess. Like the wheels, Nowicki swaps out the street brake pads at the track, replacing them with Hawk DTC-70 and DTC-60 race pads. Take it from us, the Brembo brakes and Hawk pads work tremendously well. For safety’s sake, there are also Sabelt lap belts and a harness bar.

The greater track capability of the Concept7 perhaps comes with the slightest of disadvantages: the wider wheels and tires increase rolling resistance, while the larger brakes add a few pounds of unsprung mass. It’s not a huge issue, but with “only” 460 horsepower on tap, it’s nothing another 50 or 60 horsepower couldn’t fix—and that’s exactly what Nowicki is working on. He’s evaluating a heads-and-cam package to push the LT1 engine beyond the 500-horsepower mark. That, and a Corsa exhaust system to back the greater performance with the appropriate aural output.

“It’s a natural extension of the Concept7 range and echoes the approach we did for a number of years with the C5 and C6 packages at Specter Werkes,” says Nowicki. “Many drivers who use their car on the track prefer a stout naturally aspirated engine and that’s what we’ll focus on.”

Despite requests from owners such as Bloomquist to build complete cars, Nowicki Autosport designed the components for individual sale and independent installation. They’re all essentially bolt-on parts, but installation of some parts is more complicated than others. The rear spoiler, for example, requires removal of the rear fascia—although it bolts to the existing mounting positions for the factory rear spoiler.

“We’re growing every day, designing and producing new parts and adding distribution for the products we use on our vehicles,” says Nowicki. “It’s been a fast ramp-up, but an exciting and fulfilling one, as the C7 Corvette has reinvigorated enthusiasts everywhere. It’s the best Corvette ever and I believe we’re doing our best work ever.”

Indeed, Jeff Nowicki is proving he and his new brand will be inextricably linked to the Corvette and the enthusiasts who want to take what the factory gave them to a higher level.