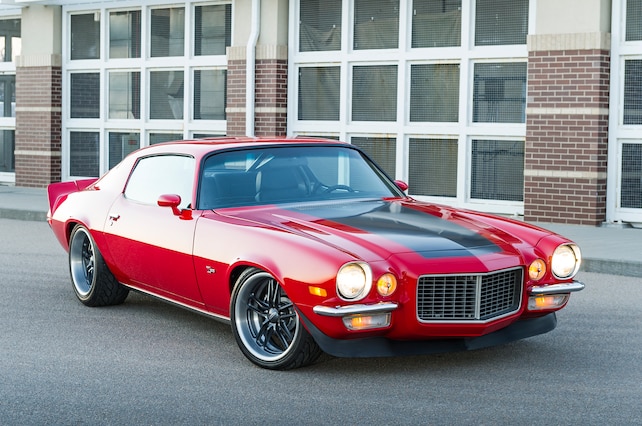 This little saga began decades ago and was not without some sibling rivalry. It seems Lonny’s dad bought his son’s high-school Camaro … and used it as a trade towards a ’57 Corvette he was building for Lonny’s sister Lynette. “I always wanted that car back, but I never could afford it,” Lonny confessed. “About 36 years later, I got the chance to finally get one and modify it in a manner that meets today’s cool standards.”

Being the master and commander of Lonny Moore’s Collision Repair (Wichita, Kansas) was at least serendipitous and made a great difference in the expediency of the build. Lonny had a ready staff that included family clan Kyle, Larry, and Lynn Moore who were abetted by pal Bret Loibl. Kyle did the bodywork and paint; Larry thrashed the suspension, and Lynn’s opinions on the process were respected by all. Bret is the electrician.

Lonny has his opinions, too. To him the most unique features of his car are the big-block engine, the paint, the modified valance, and the rollcage. He could recoup on the metalwork, the paintjob, and some of the ancillary functions and he saved on the engine, too. It’s a modified 454 H.O. crate, but not much. But hell, it’s a big-block and that speaks volumes. It presents a modern image now, replete with FAST throttle body EFI on the stock GM intake manifold. Under the OE air cleaner, the engine looks like it still carries a carburetor.

Some minor modifications followed but they were more for ease of operation than an increase in power. As is, the 454 has plenty of raw meat: it has a forged rotating assembly and a rather low compression ratio, making it a good boy for a forced air application, should the psychic need arise. Lonny tends it with a four-row AFCO core that also houses a transmission fluid cooler. He gave it an MSD ignition system, Sanderson headers, and Flowmaster 50 Series muffs. The remainder of the exhaust tract was erected by American Muffler in Wichita.

Considering the creature comforts he’s got, it’s evident that Lonny likes to drive, sometimes long down the road, so an overdriven top gear was imperative. Wichita’s celebrated Neal Chance built him a 700-R4 and a 2,500-stall converter to go with it.

Prior to any changes within the car, Bob Bills erected a six-point rollcage for safety as much as for the torsional rigidity it affords. Lonny’s expertise gravitates to a gentle mix of form as well as function. He spent lots of time arranging the interior and had a host of help doing it. Electric head Bret rewired the Camaro and installed the cheap (Lonny’s word) stereo system and affixed the colony of Auto Meter instruments. Over at 447 Rock Island North, Scott Downey was in full rock and roll mode as he attacked the interior, fabbing the console, laying down the Daytona weave carpet, reforming the rear seat and stitching it to match the leather-sheathed Recaro seats, the door panels, and the package tray. That big round thing in the middle of it all is a Budnik V2.

There’s more to it, of course. On the assignment gig, Editor Nick tagged this car as Pro Touring, but certainly the package was tailored to Lonny’s vision, be that strictly Pro Touring or not. Larry Moore anchored the almighty suspension at the stock original uprights and then added RideTech stuff: tubular control arms and shock absorbers surrounded by DSE coilover springs. To eliminate the binding inherent in the OE leaf spring bundles and to locate the new parts, he used a RideTech four-link system, supporting the Moser axle with RideTech adjustable dampers captured by coil springs. American Muffler got busy again, this time with Wilwood disc brakes to burn off energy, 14-inchers in front followed by 12-inch plates.

Now, the curious thing about this Camaro is its rims and tires. Though not the mondo combo usually common to aspiring Pro Tourers, a trick of light, carefully chosen wheel offset, a rim sympathetic to the cause, and the world’s most bitchin’ stance creates a near optical illusion. Certainly, the Budnik V2 18x8 and 18x11 rims (4.25-inch and 5.00-inch b/s, respectively) are big enough, but the Pilot Sports are very conservative: 225/35 and 275/30. Queer thing is that the combination appears to be larger than that. Regardless, the effect is as stunning as the Camaro’s creepy-crawly stance and the body that has been dropped 4 inches.

To put this car in the realm of doable, Lonny and clan simply did the best with what they had, cleaned it up, made it presentable, and then went on to a more pertinent project. In other words, it isn’t anywhere near show quality—because that notion has never produced an ounce of performance. The territory under the hood is the original wasteland, no attempt at smoothing, hiding, or replacing equipment with something more modern. The battery is still over the right front wheel. The A/C compressor is original. Hoses and wires are hither and yon, seemingly random. But when the AFCO core/transmission fluid cooler went in, Lonny amended it with a support panel that at once covers the equipment and lends torsional strength to the critical radiator core area.

Moore’s Collision Repair smoothed the sheetmetal slick, buffed up the grille section and added the rolled pan and the RS/Z28 bumperettes (re-chromed by Advance Plating, Wichita) prior to Lonny lapping it in Sherwin-Williams Viper Red. And even if you own the paint jail, that’s no guarantee that your sentence will be reduced. Lonny and the Moore clan obviously fit the Camaro between paying jobs, hence a three-year gestation.

But it was worth it. Lonny says his most memorable experience in it were the moments he autocrossed it at a Goodguys event.

No word on Lynette’s Corvette.