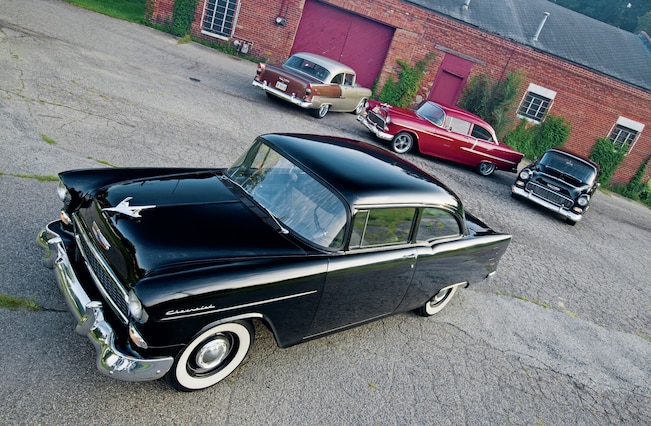 It changed the world. In the fall of 1954, stodgy Chevrolet altered its image forever with the introduction of its magnificent 1955 lineup. From the lowly 150 Utility Sedan to the sleek and expensive Bel Air Nomad wagon, it was a complete departure from the division’s (rather successful) past. Ed Cole’s remarkable small-block V-8 was born and found a home in the finest looking Chevy ever to that point—perhaps ever.

Oh, that ’55 design was not without controversy. Internally, some felt the Ferrari-inspired egg-crate grille was a little too sporty and unconventional for the brand’s conservative customers. When initial sales reports were not what was expected, there was actually talk of rushing the more formal ’56 front end ahead six months for a mid-year refresh. But suddenly sales exploded and the ’55 Chevy became a legend in its own time, setting a sales record, with production exceeding 1.75 million units.

Certainly the world has changed a lot over the past 60 years, but one constant has been America’s love affair with the ’55. People who know (or care) nothing about cars can identify the ’55 at glance. Hot rodders instantly adopted it and for the first time since the Chevrolet brothers were actively involved in racing, the Bow Tie brand became a common site in winner circles in motorsports. Cole’s small-block, supposedly birthed in a remarkable 15 weeks, became the darling of the performance world, and the ’55 is more desirable now than perhaps at any time in its history.

The three modified machines you see here are all the product of Woody’s Hot Rodz in Bright, Indiana. If the Woody’s name sounds familiar, it’s because it is putting on the Tri-Five Nationals in Bowling Green, Kentucky, this August at Beech Bend Raceway Park. All three were built from the ground up as brand-new cars, with virtually no parts dating back to the Eisenhower administration. Woody’s produces all-new GM licensed ’55-57 Chevy bodies and their own frames. One of these has a Woody’s frame, while the other two ride on Art Morrison Enterprises chassis.

Speaking of Eisenhower, purists will want to check out the ’55 150 Utility Sedan on page 40. Ordered in September 1954 by Brig. Gen. John Eisenhower, the son of then-President Dwight D. Eisenhower, it is about as original as any ’55 you’ll see. It still wears its factory paint, tires, belts and hoses, and has racked up a mere 19,610 miles. Check out the oil change sticker dated 7/28/57. At the time of this service, it had 16,943 miles, meaning it’s traveled fewer than 3,000 miles in the past 57 years.

The Torch Red feature vehicle has the most modern powerplant of the hot rod trio, a Chevrolet Performance LS3 crate engine making 480 horsepower. It’s backed by a Tremec five-speed and rides on a Woody’s Cruiser chassis with a 9-inch rear packing 3.70 gears. The interior is 100 percent custom with the floor covered in Auto Custom Carpet—a natural given the fact that Ken owns that company.

Another ground-up build, this one utilizes an Art Morrison GT chassis with a 9-inch and 3.70 gears. The colors are off a ’12 Ford truck, while the interior was handcrafted at Woody’s. Under the hood is a descendant of Cole’s original 265 V-8, but with about three times the horsepower. It’s a traditional Mouse, a 383/450hp crate mill from Chevrolet Performance, and power gets to the rear via a 700-R4 overdrive automatic.

Visually, this one’s only a little fancier than the Eisenhower 150—a little side trim and modern rolling stock. But under the hood and inside, it would have given the future brigadier general and ambassador to Belgium pause. Unlike the stark Utility Sedan, Michael’s ’55 has a sybaritic cabin, with a sumptuous, deeply padded leather bench seat and conveniences like Wilwood brakes and air conditioning. And if the president’s son liked the kick from the 265 2-bbl V-8 in his 150, the 502/502-horse Rat in this shoebox would make him positively delirious. We can just picture him powershifting the Tremec five-speed’s floor-mounted shifter. Thanks to the ultra-wide tires and Art Morrison GT chassis, we bet he’d head right out to the closest of his father’s interstate highways for a top-end blast.

The Sondles purchased this in 2012, the previous owner being Baseball Hall of Famer Reggie Jackson. It was Jackson who filled them in on the car’s rich history. Eisenhower was a brigadier general stationed in Indiana when he placed the order. Considering his father was a former five-star general and the president of the United States, this is one austere automobile. Let’s face it: The thing doesn’t even have a rear seat. It appears the only notable options are the 265 V-8, windshield washers, and passenger-side sunvisor.