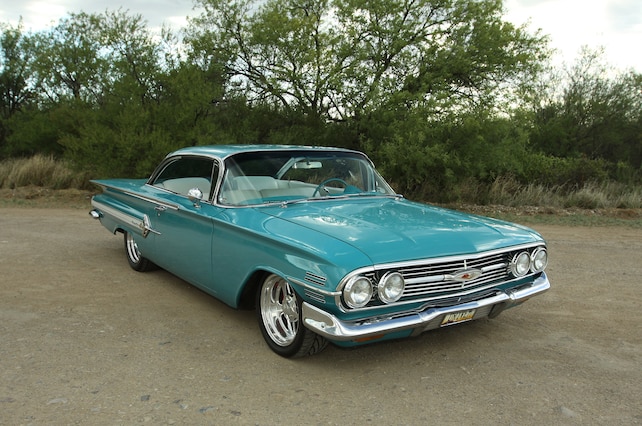 There are all kinds of reasons why a guy picks out a certain year and model of car to restore or customize, but the most common is he used to have one just like it. This wasn’t the motivation in the case of Ron Troutman and his 1960 Chevy Impala – quite the opposite actually. A 1960 Impala was the last car on Ron’s mind while he was driving through Mesa, Arizona, about 11 years ago, but there it was, and somehow this ’60 Impala caught his eye.

As Ron got closer, the worse the Tresco Turquoise paintjob on the ’60 looked and the bigger the trim holes missing all their stainless steel trim appeared. The one good thing the Impala did have was a freshly rebuilt 348 under its hood. Not such a good thing was it had a cast-iron Powerglide automatic transmission, but a quick trip to Sharp Transmission in Tucson had a 700-R4 with a 2,000-stall converter installed. To connect the 700-R4 to a 10-bolt rearend with 3.08 gears rebuilt by Highway Drive Repair of Tucson, a custom-made driveshaft from Inland Empire was put in place.

If there’s one thing Ron is known for, it’s driving his ’60 Impala a ton of miles. One time, a lady at a local Tucson weekend cruise told Ron she’d spotted his ’60 cruising through Tulsa, Oklahoma. Ron says he’s put over 70,000 miles on the car since he finished it 10 years ago, but its 348 doesn’t have the rebuilt innards it had when he bought it. Ron had Greenway Auto Service of Phoenix yank the W-motor out and give it a go-through that included a 0.010-inch overbore plus a little bit hotter Crane cam. Carburetion comes from a 600-cfm Edelbrock 1406 AVS with an ACDelco mechanical fuel pump, and a modernized ignition from PerTronix. To keep the 348 running cool in the worst summer heat the Southwest has to offer, Ron ordered a Northern cross-flow aluminum radiator from Summit Racing. To keep Ron running cool while he’s stacking up the miles, the ’60 has ice-cold A/C from Vintage Air.

Ron loves the ’60s original Tresco Turquoise color, but hated the paintjob the car came with. This is where Scott’s Rods of Tucson entered the picture. Scott stripped the offending paint to the bare metal and shot the ’60 in a cocktailed mix of a DuPont base with a PPG clearcoat.

Since Ron spends a lot of time behind the wheel, a comfortable and stylish interior was important to him. The white Naugahyde upholstery and Pioneer sound system were done by Marv Strickland of Tucson.

When asked if there was anything Ron would do different if he had the chance to alter anything on his ’60, he said he wouldn’t change a thing. The people and companies he’s dealt with during the last 10 years have provided quality service and the ’60 Impala has had a minimum of problems. In Ron’s words, “the car is absolutely amazing.”

Judge for youselves if Tony Kelly's 1960 Chevy Impala with a 348 engine is really the coolest Impala in town of his time. - Super Chevy Magazine

Check out this custom 1960 Chevrolet Impala, brought to you by the experts at Chevy High Performance Magazine.