Trigger Happy: “Lord, help me be pure, but not yet.”—St. Augustine 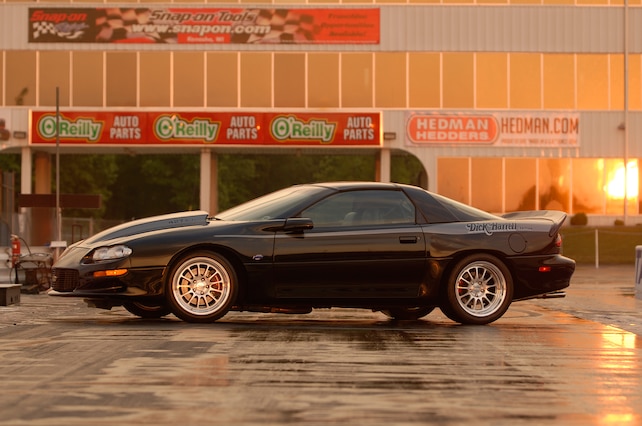 Years ago, we were privy to a very special event. Though it was a posthumous tribute, the spirit of Dick Harrell was tangible. His wife and daughter, his faithful crew, and the recipients of his legacy packed the house for the first view of the Dick Harrell Edition Camaro. In the day, AHRA Funny Car racer Dick was known as “Mr. Chevrolet.” He thought so much of his affiliation with the Chevrolet brand that he wouldn’t switch to a late-model Hemi when to most of the Funny Car nation it was a simple matter of evolution.

Dick was honored at Matt Murphy’s GMMG Inc. in Marietta, Georgia, and all the parties (including us) were asked to sign the shock towers of each of the 30 converted and soon-to-be-converted F-bodies in GMMG’s holding pen. We remember a similar special indoctrination at Harrell’s Kansas City shop nearly 40 years ago when we were invited exclusively to test the first ZL1 Camaro as delivered by the COPO king Fred Gibb (Chevrolet). So it would seem that this little universe has come full circle. The salient fact: a Harrell Edition car with its flexible, modern, emissions-legal 427ci LS engine would easily thump the bad-boy car and its primeval, gross-polluter, all-aluminum 427 big-block.

Prior to the Harrell phase, Matt had supplied his hopped-up Camaros to several dealers on an exclusive basis, but Berger Chevrolet in Grand Rapids, Michigan, is the premier vendor. So the two Matts, Berger and Murphy, came together on the Harrell Edition and made sure it would be the hairiest darling of all GMMG’s fourth-gen conversions. With the support and backing of the top guys at the newly formed GM Performance Division, GMMG got permission to re-create the widebody look of the GM prototype car, known as the 2002 Woodward Dream Cruise Camaro.

Without a doubt, the most difficult part of the scenario was making those bulging fenders from fiberglass and having them appear better than OEM steel. For this considerable task, GM Designer Randy Witten grasped Director of Design Kip Wasenko’s (the father of the fourth-gen Camaro) vision and enhanced it with those bulbous good looks, which were also a product of Wasenko’s fertile mind. Since the original body bucks used on the Woodward car were long-ago trashed, Witten had new structures built, and to preserve authenticity, all the action took place at the GM Design Center. This included the adaptation of the wider front and rear fenders, the hood, valances, and the air dam and spoiler.

As compelling and exciting as the swollen, blood-filled body is, the interior is unabashedly plain, until that cleverly hidden rollcage creeps into your peripheral vision. The gauge nacelle holds black-on-silver instruments specific to the Harrell Edition, but the specialty-car gig ends right there. A cursory glance inside this rocket reveals very little of its potential.

Though all the car’s vital systems were upgraded to meet the serious influx of power (about twice that of a stock SS), the diamond in the wheat is undoubtedly the $7,500 Chevrolet Performance Parts C5R cylinder case developed for the Corvette road race program. In this instance, a conservative 4.125-inch bore (that could safely go to 4.160) is linked to a 4.00-inch stroke. The highlight is that its displacement is expandable to 454 cubic inches and the ability to increase bore size is the key.

Only the best stuff gets into one of these GMMG 7.0L powerhouses. A Callies 4340 arm and Callies 6.125-inch 4340 billet steel connecting rods are secured by ARP fasteners. The pistons are lightweight JE forgings with a static compression ratio of 12.0:1. Though cam timing is a secret, it’s a COMP hydraulic roller ground specifically for this engine combination, uses one-piece COMP Cams pushrods, titanium retainers, and tapered springs with an open pressure of just 320 pounds. GMMG caps the long-block with its own Phase 3X TEA CNC-ported LS6 cylinder heads (2.055/1.600-inch valves) and seals them with Cometic MLS gaskets.

On top of that, TEA massages the Holley aluminum intake manifold and Matt equips it with Accel 36 lb/hr injectors feeding off a BBK electric pump. Kook’s Custom Headers is currently the hottest ticket in LS land so GMMG applied its stainless steel 1 7/8-to-2-inch stepped primary long-tube headers. Custom catalytic converters slip into the 3-inch Y-pipe that swells to 4-inch exhaust pipe before dumping into the transversely mounted chambered-pipe “silencers” that are GMMG’s trademark. For a little bit of squirrel in any hot rodder, Matt specified a single solenoid-operated exhaust cutout controlled by a GM convertible top switch on the dashboard. The result is 630 hp at 5,500 rpm and 620 lb-ft of torque at 2,800 rpm.

Then there’s Robert “Trigger” Smith, one of Toledo’s best boys. Trigger is a Camaro junkie, has several iterations of the GMMG marque (2002 427 Berger ZL1 #1, 2000 Berger SS 427, 2002 Berger Hot Rod Edition 427, five 30th Anniversary Camaros, four IROCs, a 2007 ZO6, and a 1969 396/375 Nova) so he was destined to own this Harrell classic. Trigger: “I bought it for investment value and uniqueness like the other GMMG cars I have. In other words, I’m thinking about the future. I cut up a COPO back in the day to go racin’ and basically wrecked a piece of history. I didn’t have the money then to sit on it and wait for fortunes to turn.” But he does now. “Dick Harrell was someone we all knew and respected back in my street racing days of the early ’70s. To own a tribute car in his honor brings my Camaro cruising days full circle as well.”

Using GM parts that have already been certified is instrumental in maintaining a full GM warranty. As a for instance, Murphy puts beautiful 13-inch ZO6 brakes on his Harrell Camaros rather than complicate the process by involving the aftermarket. Combined with big-ass BFG 295/35 T/A KD and really big-ass 345/30 Drag Radials on super-light 18x11 and 18x12 Fikse Profil 13 three-piece rims, the thing feels about 1,000 pounds skinnier than it really is when you squeeze the retro pedal. No drama here. The combo hauls the Camaro down straight and true.

The Trigger’s on automatic, too. A hopped-up 4L60E hosts a Yank torque converter with a 3,600-stall. The sweet spot in the engine’s more than 600 lb-ft easily covers the converter and the 4.56s. (Obviously, Trigger ordered the same gears for his GMMG DH automatic that he would have for his Turbo 400 street cars years ago). They get the car moving away in a hurry — if our intrepid pilot can keep the hides intact. Hide-boiling with the Harrell is more addictive than breathing. The failsafe is the drivetrain, a complete Strange Engineering 12-bolt activated by a companion chromemoly steel prop shaft.

To hang consistently with the scary-power module, the chassis of Trigger’s #19 has accumulated bits of “foreign material” that make its 1LE suspension work even better. Primarily, the carcass was firmed up with a Wolfe Racecraft rollcage that lends the stiffness that the steering and suspension need to do their jobs correctly, and a set of subframe connectors. Eibach coils drop the body 1 1/2 inches; Koni adjustable struts and shocks temper wheel movement. The 1LE antisways are intact and the GMMG-specific front bar has been liberated by Heim joint endlinks. Even with that fat, no-sidewall rubber steamrollering underneath, the DH rides smooth but very firm, not kidney-disturbing firm but after an extended interlude in the super-pod, you’ll know you’ve been someplace. Murphy describes his cars as a “Thrill Ride,” and this DH Edition does just that. You don’t travel in a GMMG Camaro, nor do you drive it or command it to go to buy groceries in it. You have interludes with it. Right, Trigger?