All Wrapped Up: David Moster’s 2003 Z06 is black and white and fast all over 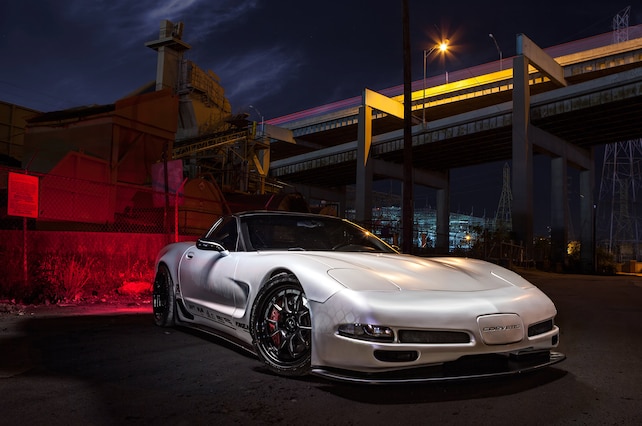 David Moster is the proverbial “gearhead” and has always been passionate about cars, especially Corvettes. “My stepfather was a huge Corvette fan, and owned one of every generation, minus C1 and C5 (he went from a C4 to a C6). When I was 13 I made a deal with my parents that if I got straight A’s through junior high and high school, they would help me buy a Corvette. Well, I got one B, in 9th grade, so I didn’t get that Corvette. I didn’t complain because I knew my parents didn’t have the money for one, even an older used one, and with my driving at the time, I don’t blame my stepdad for not trusting me with one yet! However, it did motivate me to work hard. I always had a passion for design/engineering, with Thomas Edison as my primary ‘idol’ from a grade school age.” It should come as no surprise then, that he ended up designing jet engines for a living. It has turned out to be a fun career that gave him the funds necessary to fulfill his dream of owning a Corvette.

David’s 2003 Corvette Z06 started out as just a fun daily driver, but it wasn’t long before the modifications started. “When I first started building the car it was just to do anything ‘fun’ (autocross, road race, drag race, and just street driving), not for any type of racing class. I started hanging out with Danny Popp (owner of Raft Racing, and a well-known Corvette guru) and he convinced me to get more serious about road racing and to build the car for competition in the Ultimate Street Car Association (USCA) events, with the hope of getting a SEMA invite to the Optima Ultimate Street Car Invitational (OUSCI).” This gave David a goal and a set of rules to guide the build, but it also ratcheted up the build to a whole new level. Competing in the OUSCI is running with the big dogs and if you want any chance of doing well then your car needs some serious performance.

“I liked to autocross it a bit and occasionally hit the dragstrip. Then I decided it needed a bit more power and put an intake and exhaust on it, followed by a camshaft, all just to be faster than my friends. After a while, I decided it was time to make serious power and got an LS3 block, a great set of heads, and a host of goodies from LG Motorsports, including a G6X3 camshaft. I put together my own custom dry kit for a 150 shot, and hit the dragstrip. I was addicted to horsepower at this point and nearly every penny had been spent on the engine alone, with the rest of the car stock, aside from used Sparco seats I picked up, and some used CCW wheels. The result was a car that made 500 rwhp/460 tq on motor, and 630/710 on a 150 shot. I borrowed Danny Popp’s CCW Drag Pack and went to the dragstrip. It ran a best quarter-mile of 10.56 at 127 mph with a 1.56 60-foot time, missing Fourth gear and having to coast the last few hundred feet across the line. The best trap speed I recorded was 132 mph, but I had messed up the launch and had a 10.8 e.t. Then at the next, and last, test and tune day, I hurt the motor. I hadn’t gapped the piston rings [for nitrous] when I assembled the motor, thinking I wouldn’t need to for a 150 shot. I was wrong. The gap closed and cracked the ring land off on the number seven piston,” recalled David.

While “rebuilding” the LS3 the snowball effect kicked in and soon, with the help of his friends, it morphed into a very stout 416-inch stroker. The bores were honed out to 4.070-inches and a 4-inch forged Callies crank and matching 6.125-inch rods were added to the mix. After much discussion, David settled on a COMP hydraulic roller cam with 247/255 duration (at 0.050) and 0.624-inch lift at 113+3 LSA. A set of +3cc Wiseco slugs help achieve the 12.0:1 compression ratio and the short-block was capped with set of Trick Flow 235cc heads that had been massaged by Brian Tooley Racing. A Nick Williams 102mm throttle body helps stuff atmosphere in and spent gasses exit through a set of LG Motorsports Super Pro 1 7/8-inch headers and Stainless Works 3-inch mufflers. And, using the “what the hell” philosophy, he also upped his nitrous system to a 300hp capable wet shot. The engine made 551 rwhp and 490 lb-ft of torque on a Dynojet, without the nitrous!

Danny Popp helped David dial in the handling and gave a ton of advice to David who mostly wrenched on the car himself. He also started getting driving tips from Danny and hitting all the local HPDE and open track events. In late 2013 he got serious about running in the Ultimate Street Car Association (USCA) events, which are qualifiers for the OUSCI held after SEMA. David recalled, “I wanted the car to have a fresh look, but didn’t want a new paintjob, so I went to Spade Kreations for flat-white wrap, knowing they really were the best in the business. The great guys from Forgeline hooked me up with a set of GA3R wheels (18x11 front and 18x13 rear), which really completed the exterior transformation. For tires I chose BFGoodrich Rivals in 315/30 front and 335/30 rear. The brakes were kept simple with the addition of C6 Z06 pieces fitted with Hawk pads.

“After my first HPDE event, with the new performance parts, I knew I was hooked. Then in May I competed in the Midwest Musclecar Challenge and won awards for Fastest Novice and Top Speed Overall on the front straight. I knew the Corvette was coming together, but realized I needed to start replacing the tired stock suspension if I wanted to get faster and get a SEMA invite. JRi hooked me up with a set of double-adjustable shocks, and Danny helped me find some used Pfadt bars and VB&P springs. Danny also convinced me it was time to upgrade the driveline, and introduced me to George at Rockland Standard Gear, who built the six-speed Tranzilla (ZR1 gear ratios) for me. My friend Ray Bulach introduced me to Jeremy Jones at RPM Transmissions and soon I had one of their Level 4 differentials with 3.90 gears and Raft Racing cooler.”

Things were going great for David and his track-monster Z06, but then “stuff happened.” As David explained, “I tend to drive pretty aggressive and had a 12/10ths moment at the Holley LS Fest. Running the Vette into the wall took me out of contention for the SEMA and the OUSCI event, which was not fun at all. But it did motivate me to get more seat time and try again this year.” So, if you’re running at any track events in Ohio, or just cruising down the highway, and see a flat-white Z06, just remember the proverb about judging books by their covers.