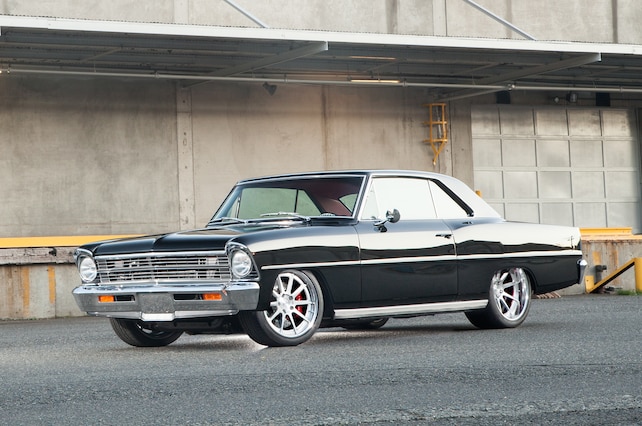 It’s a trade event at heart but the SEMA show has been a bit of car show since its birth. It makes sense for a vendor to display parts and services on their native homes, on vehicles, and they either build or invite cars to fill their booths. In 2013, Dynomax invited Chris Holstrom Concepts (CHC) to display one of its customer’s cars in its booth.

No car show would be complete without awards, of course. Vendors scout the show floor looking for vehicles worthy of praise. It’s pretty smart if you think about it: it ties the awarding manufacturer with the car, which results in a huge marketing benefit.

But a seemingly unlikely vendor cruises the aisles. Every year since 2003, Sony inducts a car into its flagship driving game, Gran Turismo. The list reads like a who’s who in the industry. Among them, Art Morrison Enterprises’ 1960 Corvette, Grand Touring Garage’s 1970 Mustang, Mark Stielow’s 1969 Camaro, and Mary Pozzi’s 1973 Camaro.

Sony did something completely unexpected, at least as far as Holstrom’s crew was concerned: it nominated the car Holstrom brought. Then the company did something beyond the crew’s wildest dreams: it inducted the Nova. What’s even more amazing, it was a precedent-setting third car inducted from Washington state, more than any other state, and the fifth from the Pacific Northwest (seventh if you lump in British Columbia). There must be something in the water.

In light of some of the other winners, Phil Mitchell’s car is a model of simplicity. In fact, the body remains almost entirely stock, at face value something that would otherwise make it seem an improbable candidate. But fancy looks aren’t everything. Performance, on the other hand, is.

The shop based the project on Detroit Speed Inc. suspension, the clip with the Corvette knuckles up front and the company’s QUADRALink rear suspension out back. The rear axle consists of a 9-inch housing with a Detroit TruTrac limited-slip carrier and Strange Engineering 31-spline shafts. Each corner rides on JRi Shocks’ monotube, coilover dampers and Forgeline’s three-piece RB3C wheels. They measure 18x9 and 19x11.5 and wear 275/35 and 305/30 Continental ContiSportContact 5P tires.

Baer 14-inch rotors and six-piston calipers earn their keep. The car came with an LS9. At 638 hp, the 6.2-liter engine is as tough as it is exceptional. But this one isn’t normal. Though Eric’s Automotive in Enumclaw, Washington, left the engine stock internally, it coaxed almost another 100 horsepower more than the factory specs. “(The engine) could make more power with an injector swap,” Holstrom brags. “But how much power does a 3,000-pound car need?” A pair of DSE headers make the engine fit. They flank a Tremec T-56 transmission.

A car usually has to sport a vendor’s products to earn a spot on the show floor. Believe it or not, but the 3-inch pipes under the car began as one of Dynomax’s builder’s kits. A pair of the company’s Ultraflow mufflers take a little bit of the bite off the bark. The tips exit flared arches in the rear bumper.

As mentioned earlier, the body remains largely stock—so stock that it wears its side trim, door handles, window garnishes, and vent wings. In fact, the only outward modifications are a hand-made cowl vent and small air dam below the bumper … and they’re both subtle. You wouldn’t know by looking at it that the Anvil hood is carbon fiber.

Things change under the hood. Naturally, CHC used DSE’s inner-fender panels. A pair of billet hinges bolt to them and a custom-made intake pokes through the passenger side.

The firewall is entirely a CHC design, flat with bead-rolled inserts and a Wilwood master cylinder. The core support is an entirely new, simpler design. So bent on cleanliness and logic that the crew painted the core support and AutoRad radiator black. It’s an element that everyone should copy—a support and radiator in any color but black is a distraction that competes with the grille and makes the nose look messy. Don’t just take our word for it; the OEMs paint everything behind the grille for that very reason. If that’s not good enough reason then consider that a car done that way won the Gran Turismo award.

“We decided to make the trunk an extension of the outside of the car,” Holstrom notes. The decision resulted in hours upon hours of bodywork. But it’s worth it: the lid opens to reveal a purposeful-looking formed bulkhead between the tubbed wheelwells. It conceals a Rick’s Tanks 22-gallon stainless tank. Another hand-formed panel on the left-side trunk floor holds an Aviad dry-sump reservoir. The one on the right cradles the battery.

Jamie McFarland at McFarland Custom Upholstery in Puyallup tailored the back-seat foam to match the buckets. He also created all of the panels, including the package tray. He trimmed everything in red leather and distinguished the panel inserts with a double-stitch diamond pattern.

Chris Holstrom’s the first to admit that he’s surprised by his crew’s good fortune. As shops go CHC’s not physically large. Nor is it all that old.

But neither is all that important if you think about it. What truly matters is quality, among the components style, construction, and probably most important, consistency. It’s the recipe that made a rush-built car a candidate for what’s possibly the highest-profile award in the industry. They may not all be part of our corner of the hobby, but millions of people the world over will see Phil and Sita Mitchell’s ’67 Nova.

Which raises a question: What could Chris Holstrom Concepts come up with if given a little more time?