The Odd Story of a Certain 1970 Chevrolet Corvette LS5 Coupe 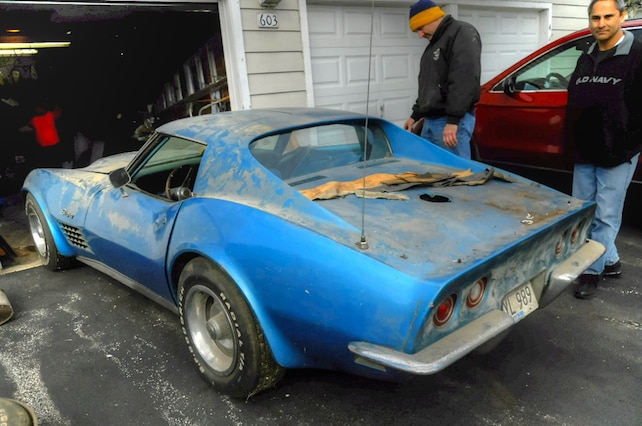 “I couldn’t believe it. My jaw dropped,” Darrell Bergeron said. Bergeron expected “a little bit of dust” because the Corvette had been sitting in Kevin Sheehan’s single-car garage for at least 30 years. “I looked at Kevin and said, ‘What the hell did you do to this car?’ And he was like, ‘Uh, I told you it was tucked away.’”

The two had to dig to pull the 1970 LS5 Corvette from garage storage dating to the time when Darrell was 12 years old. He’s 43 today. “When I was a kid, Kevin dated my cousin. When they got married I was 8 years old. We toilet-papered and shaving-creamed the Vette and stuffed it full of newspaper. They were supposed to take it on a road trip for their honeymoon. It took them a couple hours to get it all cleaned up.”

Kevin and his wife drove the ’70 LS5 for a couple of years after that. All the while, Darrell admired the Vette and dreamed of the day he might be the proud owner. One day the fire department arrived to break down Kevin’s garage door. The gas tank had sprung a leak and a neighbor called 911.

A fire didn’t break out, but Kevin did drop the gas tank for a repair. He just never finished the job. Instead, he set the tank on the back end of the Vette and shut the garage door—33 years ago. “He literally just walked away from it and never touched it again,” Darrell said.

Who knows what garage doors hide? This single-car garage hid a treasure from long ago.

After removing debris, the gas tank that Kevin pulled over 30 years ago was visible in the same spot where he left it.

Backed out into the light of day for the first time in over three decades, revealed original Mulsanne Blue paint.

The blue interior was also original.

Darrell turned into a “car person” when he grew up, and never forgot the ’70 LS5. In his early 20s he began bugging Kevin to let him buy the Vette, but with no luck. “He never let me see it. It was locked up in his one-car garage and that was it. The door was closed.”

The two had a good relationship. Later, Darrell figured out why Kevin laughed off his requests to purchase the old Vette. “He wasn’t sure that I could respect it.” Kevin’s attitude changed at Darrell’s 40th birthday party. The party Darrell’s wife threw for him included a car show at their house. She invited friends with cars. Darrell displayed some of his cars in his yard, also, including a 1992 Mustang he bought brand new. “He wanted somebody that was gonna cherish his old Vette as much as he did ’cause he had a lot of memories. He used to race it at Blackhawk a little bit and got into a couple police chases and he just enjoyed the car.” The two started talking about the Corvette, which led to opening the garage door and seeing the sight pictured here.

“He had ladders up next to the side of it and insulation on the top. It was just covered in sawdust because he had a bench in the front that he would do woodworking with.” Incredibly, the Corvette’s tires still held air. Also, the brakes were not locked up and the car rolled right out of the garage. Of course, Darrell did not start up the 454. He would wait. The two agreed on a “family price.” Kevin explained he didn’t want the money in pennies. He wanted, “cold, hard cash.”

“My family likes to prank each other as you can see by the toilet-papered car. When I graduated high school, he gave me my graduation present in pennies. I borrowed money from my dad to pay for a car. When I made my final payment to my father, which was a week before my graduation party, I gave it to him in quarters.” Darrell could not let the opportunity pass to prank Kevin in some way on the sale price. Then, he got to thinking. Kevin said he wanted the money in “cold, hard cash.” Darrell took cash out of the bank in $10 and $20 bills. Then, he froze the bills in buckets full of water. “It took him two days to thaw out the money,” Darrell said. For his cold, hard cash Darrell got the Vette of his childhood dreams, a 1970 LS5 coupe with a four-speed and “all numbers-matching.” The paint is original, but chipped, and with a passenger front fender with “a little filler and primer.” Darrell plans to restore the muscle Corvette but plans to keep the original paint and “match” the original color to the repaired front fender.

The 454-cubic-inch V-8 is a numbers-matching original big-block. The LS5, rated 390 horsepower, was the top rated engine in the 1970 Corvette lineup.

This 1970 Corvette was originally purchased new on July 31, 1970 from Celozzi Ettleson Chevrolet in Elmhurst, Illinois. One year later the original owner traded in this Vette with 15,700 miles to Heritage Cadillac—where Kevin Sheehan bought the car.

That’s Maureen, Kevin’s wife, and Kevin, on the right, receiving their payment for their ’70 Corvette in “cold, hard cash.”

This Le Mans style 1970 Corvette at SEMA 2016 features cantilever suspension front and rear and is built for racing.