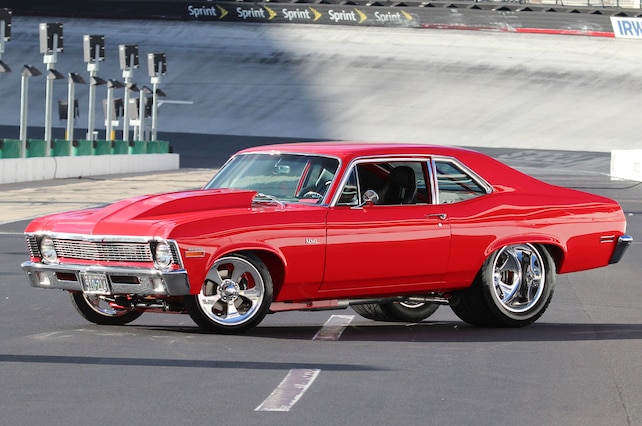 When Don McLean recorded and released the song “American Pie” in 1971, almost immediately people began trying to decipher the meanings behind each ambiguous verse. McLean himself acknowledged that while some refer to Buddy Holly’s plane crash other verses make reference to events he wasn’t going to divulge. While his song lyrics may remain an enigma, other pieces of ’70s Americana are much more obvious in their meaning. We’d say C.W. Looney’s immaculate 1970 Nova makes a statement no one could possibly misinterpret.

“I decided I wanted to build a Pro Street to play with,” Looney said. “I happened upon the car in West Virginia. The motor was blown up and the interior was gutted. Somebody had started redoing the car and hadn’t been able to finish it. I bought it a week later for $6,500.”

Of course, third-generation Novas are something of a holy grail for many enthusiasts. In response to declining sales, a complete redesign resulted in a larger car in 1968 with newer options, a front subframe and, of course, the 396 big-block. The Chevy II moniker was gone, but buyers didn’t look back as they opened their wallets for all different flavors, including Super Sports.

By 1970, however, the SS396 was in its final year. The model 11427 two-door, eight-cylinder coupe (as it was known in factory jargon) was built at the Willow Run assembly plant, just outside of Ypsilanti, Michigan, and came with several flavors of Chevy V-8 power. The Turbo-Fire 307 was the base engine, while the L65 Turbo-Fire 350 was an option for those inclined towards more spirited driving. At the top of the food chain was the L48 Turbo-Fire 350, which came with the Super Sport option only. Riding on N66 sport wheels with factory E70 14x7 tires, popular options on the 1970 Nova included the A51 front bucket seats, JL2 front power disc brakes, and N10 dual exhaust. Those more interested in creature comforts found the C60 Four Season air conditioning expensive, but worth the money.

Of course, hot rodding projects don’t always go as smoothly as one would hope or expect. Looney’s Nova spent six years in and out of shops not only because of how slow things went sometimes, but also because of the quality of the work. Things turned around, however, when he found Todd Wilson at the now defunct Complete Auto Restoration Service in Greensboro, North Carolina.

For the dropped suspension on Looney’s Nova, a Chris Alston’s Chassisworks coilover front suspension kit uses tubular upper/lower control arms with double-adjustable VariShocks and Wilwood disc brakes with 11.25-inch diameter rotors and four-piston calipers. Back at the rear of the car is a Chassisworks g-Bar coilover suspension with a 9-inch rear, 3.90 gears, and Wilwood discs. Polished, deep-dish Mickey Thompson wheels wrapped in massive M/T 33x22x20 DOT tires at the rear make up the eye-catching rolling stock.

Looney’s choice of the ZZ572/620 crate engine was a good one, as this remains the most powerful naturally aspirated factory crate engine available today. With a tall-deck block featuring a 4.560 bore, the stout reciprocating assembly is made up of a forged 4.375-inch stroker crank. The similarly forged rods push and retract 9.6:1-compression pistons into the aluminum, rectangular-port heads containing 2.25/1.88-inch valves. An MSD distributor helps light the fuel mixture while ceramic-coated Dynatech headers dump the spent gases through a 3-inch exhaust system with Flowmaster Super 44 series mufflers. Behind the ZZ572 is a B&M Street and Strip TH400 with a Greg Slack 3,000-stall converter. With an AED-prepped Holley 750-cfm carb providing 92-octane pump gas, this crate engine makes 620 flywheel horsepower at 5,500 rpm and 650 lb-ft of torque at 4,500 rpm for plenty of go on demand.

Since Looney set his car up as a street cruiser more than anything else, he didn’t want an interior that was over-the-top. As such, the Summit seats and door panels where finished in a color-coordinated leather with a custom billet steering wheel, B&M shifter, and a custom in-dash gauge array. A basecoat/clearcoat application in hues of brilliant Viper Red results in a glossy finish that turns a lot of heads.

While the classic muscle car era was dying fast by 1971, C.W. Looney’s 1970 Pro Street Nova takes many back to a place where classic Americana is still alive and well. Another slice of pie, anyone?