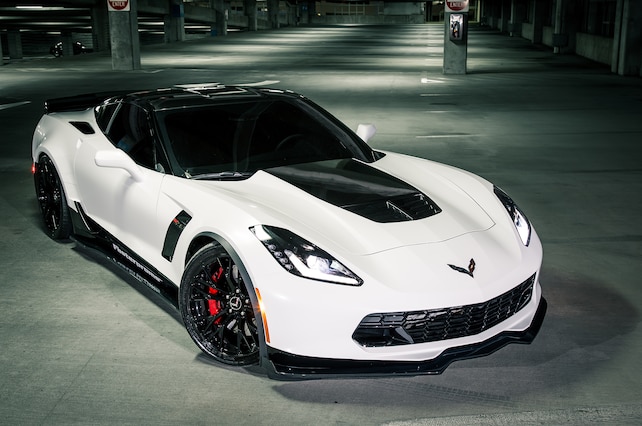 By now you have probably been inundated with stories about just how awesome the 2015 Chevrolet Corvette Z06 is in nearly every facet. Perhaps you have even seen stock eight-speed Z06s running 10s at the dragstrip on YouTube. That pales in comparison, though, to what Jeremy Formato did in a seven-speed before the new slushbox even hit the streets. The expert tuner and owner of the Lutz, Florida-based Fasterproms coaxed an impressive 714 rwhp and a 9.87 timeslip out of his R&D machine, without ever lifting off the valve covers.

The Gen V LT4 is truly an impressive bullet, using an impressive amount of technology to produce 650 horsepower and 650 lb-ft of torque from a 6.2L pushrod V-8. And it does so within the very tight confines of the C7’s chassis, meeting stricter durability standards than ever before. The LT4 is a completely different animal than the Pro Mod big-blocks with 10-71 blowers sticking out of the hood that you picture when you hear the word “supercharger.” In fact, it is the polar opposite of that sort of old-school muscle. From its cylinder deactivation, direct injection, and variable valve timing to its slender, little intercooled supercharger, the LT4 is the picture of efficiency.

Consider this fact: the LT4 makes more horsepower (and substantially more torque) with the same engine displacement and a smaller supercharger than the LS9. Sure, direct injection and variable valve timing play a big part in that, but the little 1.7L Eaton TVS supercharger is quite the marvel. It uses the same 160-degree twist of the rotors as the LS9’s 2.3L, but with nearly a half-inch less length, diameter, and center distance. The drive ratio goes from 2.32 to 3.10:1, which means it maxes out at 20,150 rpm rather than 15,080. Yet it still manages to crank out nearly the same boost (9.4 vs. 9.7 psi), and with “10-percent greater heat rejection” according to GM. The obvious response to all of this technical jargon is that this thing sounds maxed out and any fool that tries to crank up the boost is wasting his or her time.

Jeremy Formato is foolish like a fox. Show him a factory supercharged car, and he’ll show you how to make it faster. Following a similar formula as his LSA and LS9 programs, Formato started with a custom tune. As things progressed he added a modified AFE cold-air intake designed for the Stingray. He even built ducts to funnel in fresh atmosphere to create a “ram-air” effect. American Racing 1 7/8-inch headers with a 3-inch X-pipe were added to increase scavenging from the LT4 before the real R&D began. These common mods were enough to push the Z06 to 672 rwhp and 669 lb-ft of torque on Fasterproms’ chassis dyno.

To combat the heat-soak inevitable with a positive displacement supercharger, Fasterproms used a three-prong approach that would allow Jeremy to get more aggressive with the ignition timing. A 1.5-gallon expansion tank increased the capacity of the air-to-water intercooler, thereby allowing it to dissipate heat more effectively. Thermal Reduction Plates sit between the cylinder heads and the supercharger to limit the amount of heat transfer. Otherwise the supercharger case creates higher intake air temperature, which will reduce the amount of timing it will tolerate. Jeremy says operating temperature went from 140-190 degrees to 110-140, the worst of any vehicle tested thus far. Last but not least, the Z06 was converted to Flex Fuel to take advantage of E85’s cooling capacity and octane. Though he was limited to just a 50 percent mix because of the stock fuel system’s limitations. In this trim Jeremy piloted the Z06 to an impressive 10.08 at 139 mph using a set of drag radials to cut a 1.54 60-foot.

While no shops had even come close to these times yet, Jeremy was hard at work on the next round. A 2.31-inch supercharger pulley helped spin the blower to around 12 psi, gaining 19 rwhp and 31 lb-ft of torque (695/715 total). By porting the supercharger case, Fasterproms eliminated some of the restriction in the unit and gained an additional 19 rwhp and 5 lb-ft of torque while shifting the powerband and increasing boost. Cooler weather and a ported throttle body eventually allowed the LT4 to exceed 14 psi. And on that fateful trip to Bradenton Motorsports Park, Formato piloted the C7 to a 9.87 at 138 mph. He later backed that up with a 9.89 at 141 mph to prove it was no fluke.

Shockingly, the only modifications besides the bolt-on improvements are the tires for race day only (M&H Racemaster 185/55-17 front, Hoosier 315/30-18 rear) mounted on Racestar front and C5 Z06 rear wheels. Even the driveline is completely stock, save for the bellhousing, which has been modified for clutch ventilation. To celebrate, Jeremy did have Atlanta Custom Wraps cover the Artic White paint with satin white, and add some gloss black accents. As if its impressive performance didn’t already separate it from the rest of the pack.

No matter what happens next, Formato’s C7 Z06 will always remain the first to run 9s. And, interestingly, it didn’t take a big stroker engine or even nitrous to do it. Jeremy says the total investment of parts is less than $7,000. A methanol kit is next on the hit list to keep pace with the rising summer temperatures, so that the Z06 doesn’t slow down. And for good measure Jeremy plans to throw on a 100-150hp shot of nitrous to push the stock LT4 as hard as he can prior to swapping out the heads and cam. Will it become the first C7 Z06 to run 8s as well? I guess we’ll have to wait and see.