Justin Keith's C7 is Music to the Ears 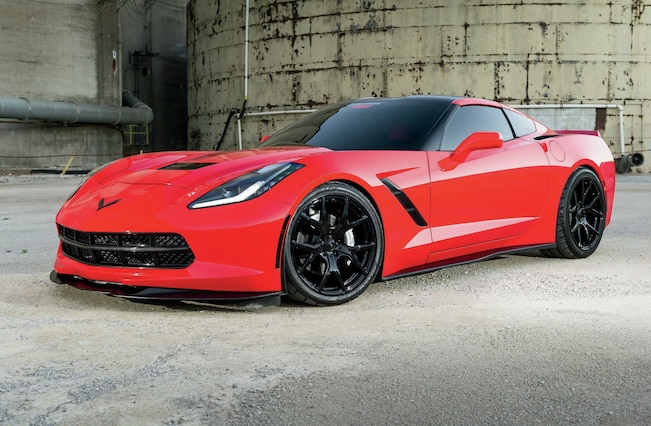 The new C7 Corvette is one seductive beast. But it’s way more than just another pretty face. Underneath all those sleek lines and restyled body panels is cutting-edge performance. For most people it’s enough to satisfy, but for others the desire for more power is simply irresistible. Justin Keith is just such a gearhead. He had just finished a 1,000-horsepower fifth-gen Camaro and it was a ton of fun, but once he planted his backside in a C7 Corvette he became hooked. As he recalled, “Once I found out the dealer would give me the GMS (GM Supplier) discount on one, I jumped on it. I quickly sold my Camaro for my asking price and soon afterwards was driving the new Stingray.”

Even with the potent LT1 under the hood, Justin soon realized changes needed to be made. After all, his last ride was pumping out some serious power, so he dialed up the guys at ProCharger for some advice. Well, as you can imagine they are quite the enablers over there and soon an intercooled F1-A centrifugal blower was on the way. Of course, you can’t just slap on a big-ass blower and call it a day. So more calls were made and before long things started to get interesting.

To help contain the extra boost, ARP head studs were added to the LT1 and a custom-grind COMP bumpstick from Futral Motorsports was slid into place. The specs are all “hush hush” but we imagine it was tweaked to match up well with the power-adders. Did we say “adders?” Well, yeah. After all, why stop at just a blower when there’s plenty of room for a nitrous system as well. A system from Nitrous Outlet is plumbed in to deliver a 100-shot of gas just in case the blower alone isn’t peggin’ the fun meter. That much power makes the stock fuel system iffy, so DeatschWerks sent over a high-flow pump and some massaged fuel injectors.

More atmosphere being sucked in means more air needs to be evacuated. This task was left to a pair of stainless 2-inch Kooks long-tube headers mated to a B&B PRT exhaust system. Put it all together and it was enough to make 900 horsepower at 7,100 rpm and 850 lb-ft of twist at 5,000 rpm. Certainly enough grunt to satisfy Justin, for now. The rest of the drivetrain, except for the Right Foot Down methanol injection kit, which calms down detonation, is mostly stock. Although we imagine the GM clutch isn’t long for the world. “I have been modding LS engines for over 10 years and this was like working on a whole different vehicle with very few similarities,” remarked Justin. In fact, in hindsight he might have just ditched the LT1 and grafted in an LS that he’s way more familiar with, but now that it’s done he’s glad he worked through the LT1 challenges.

Justin has only had the red Stingray a short 5 months, but in that time he’s grown very fond of the performance and looks of his C7. And we really can’t blame him. After all, sometimes when you hear the siren’s call you need to venture a bit closer to the rocks.