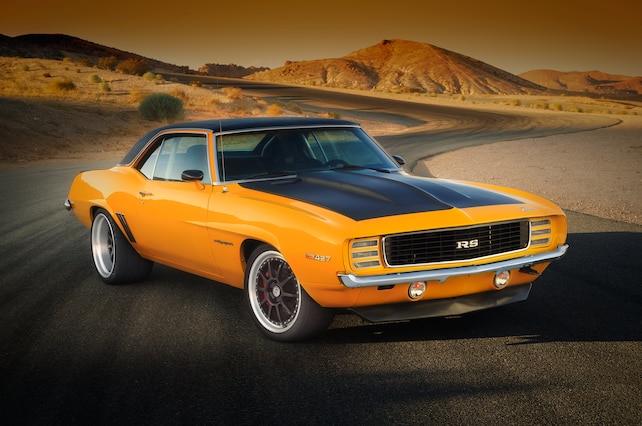 Life unfolds in mysterious and often puzzling ways. But fate often has a way of churning things around so they end up working out pretty well. Take Efrain Diaz for example. As he told us, “About 13 years ago I went through a divorce that cost me a home, my family, and strained some deeply rooted friendships. I didn’t keep much, but managed to hang onto my prized ’63 Corvette Sting Ray. The only problem was that I was living in a ’70 Chevy van and really needed to pick myself up, but I didn’t want to sell the Vette. I finally made the hard choice and sold my pride and joy. With that money I was able to put a down on a house that had a large garage. All I needed was something to put in it. So, as sort of a consolation project, I went car shopping.”

In 2002, he was walking the seemingly endless isles of the Pomona swap meet when a ’69 Camaro called out to him. It was pretty beat down and barely ran, but at $5,000, it fit his budget and it was a real-deal RS. The previous owner had stored it in his backyard, but was smart enough to remove the vinyl top and carpet so rust wasn’t as bad as it could have been. The original 350 and TH350 trans leaked so much that they needed constant supplies of fresh fluid. In short, it was a mess.

“My original plan was to restore it, so I started with the bodywork. I found the usual rust in the quarters, but it had more challenging rust in the windshield and rear glass areas. I picked up several books and read about sheetmetal repair, bought a small MIG welder, and set off to learn how to patch metal,” says Efrain. “A lot of the parts around the windshield channel had to be cut out and new pieces fabricated. I was hesitant, but committed to it, so after a few days of welding I was mostly done, but it sent me to the hospital with arc burns to my eyes, rendering me pretty much blind for a few days. It was scary. Words of advice: Buy a good welding helmet!”

Efrain then dove in and rebuilt the original drivetrain to get the Camaro back on the road. “At this time I hit a local car show where lots of really nice cars were autocrossing. The course was small and tight and at first I honestly thought it was silly. I come from a drag racing mindset and wondered why you would want to do that instead of putting max power in your car and blasting down a straight line,” he recalled.

It was then that he had an epiphany and realized that his past “straight line performers” were never used all that much and that having a handling car might be a lot more useful, and fun. With the new plan in mind, he cleaned up the undercarriage in preparation for the new handling bits, but first he had to finish the paint. As Efrain recalls, “This was the third car I had attempted to paint. I did a really nice job on my Vette so I was feeling confident. What a disaster! The primer color I had was the light gray and when I sprayed the first coat of 2000 Corvette Millennium Yellow it had a puke-green tinge to it. Thinking another coat would help, I sprayed the next coat. Things didn’t improve, so I did what anyone else would have done; I quit and drank some beer.

“Later, I consulted a local paint supply store and set out to start over. I sanded the car down again and used a buff-colored epoxy primer/sealer and bought more yellow PPG paint. By now I think I had spent around $1,600 on paint supplies. In hindsight, I should have taken it to One Day and been done with it! After a of couple of weeks, I did some color sanding and a quick buff. There’s still some peel on it, but overall I was happy with the result.”

Over the next few years Efrain continued to work on the car when he had the time and money and it’s a point of pride that he’s done everything himself. Yeah, the seams of the vinyl top are a bit crooked, but he feels that gives the car character. Upgrades were slow to roll in. A Tremec TKO-500 was installed, but the big-cam small-block was a pain to live with and Efrain started to lose interest. “I considered parting with the Camaro, but I remembered what it was for me and what it represented in my life. How it helped me through some rough times and allowed me to rebuild myself and my friendships while I was rebuilding it.

“In 2010, I blew up the 383 doing a big burnout at a friend’s BBQ. It languished most of 2011, but I pulled the motor and had the bug to go LS power after joining several forums like pro-touring.com and lateral-g.net,” remarked Efrain. He found a wrecked 2000 Camaro, ripped the LS from it and parted out the rest for enough cash that he ended up with a free engine. The car was much better, but then Efrain attended a big Pro Touring event called Run To The Coast. “I saw cars like Bad Penny out there getting beat on and there was no way I could keep up with them. My car was fine for a show and shine, but it didn’t have the suspension, braking power, or safety to run in an event like that. So, I set out to rebuild the car yet again.

“I looked at the way others were building their Pro Touring cars, people like Mary Pozzi, James Shipka, and the Tuckers from Detroit Speed. To save money, I bought used parts off people who were modifying or abandoning their projects. I stumbled across a Morrison/Scott Most-style frame from a stalled project, a used Moser 9-inch, and a used 600hp forged LS7—with a Concept One drive system—from James Shipka’s One Lap Camaro. His build was one that I looked at carefully and I followed his One Lap adventures. Talk about living the dream.

“I also picked up his used HRE C93 wheels and Michelin tires. To fund all these new bits I sold off every extra part I had lying around. I scoured the forums, craigslist, and anywhere else I could think of for parts. I scored RideTech triple-adjustable coilovers from eBay, a Griffin LS radiator with MK8 fans from craigslist, and I worked a deal out for a third member from a guy in Riverside. Getting the dry-sump oil tank in place, while keeping the RS headlights was a challenge, but I found a cool electric conversion kit from Retro Elector,” relayed Efrain.

Eventually the project started to gel, but it was time to address the back of the car. A Vaporworks gas tank was slung underneath and a Chassisworks mini-tub kit made room for bigger tires. More horse-trading netted a fourth-gen Camaro T56 six-speed and a used McLeod RST clutch. Efrain continued, “My fiancé, Lynette, even helped by giving me a RideTech Tiger Cage and shoulder harnesses for Christmas. For the interior, I had a set of Recaro seats left over from an Mitsubishi Evo I once owned and the rest was just what I could trade for, get for cheap, or cobble together. The rear suspension is a RideTech four-link that was, you guessed it, bought used.”

Efrain was dying to hit an Ultimate Street Car Association (USCA) event that was being held locally, but he still had a few things to finish. Anvil Auto was having a blem sale, so he picked up a lightweight carbon-fiber hood, trunk, rear spoiler, mirrors, header panel, and dash. After some last minute tuning, Efrain was able to hit the USCA event, and he had even more fun that he thought he would. Sure, there are bugs to work out, but that’s just part of the automotive therapy this car provides.