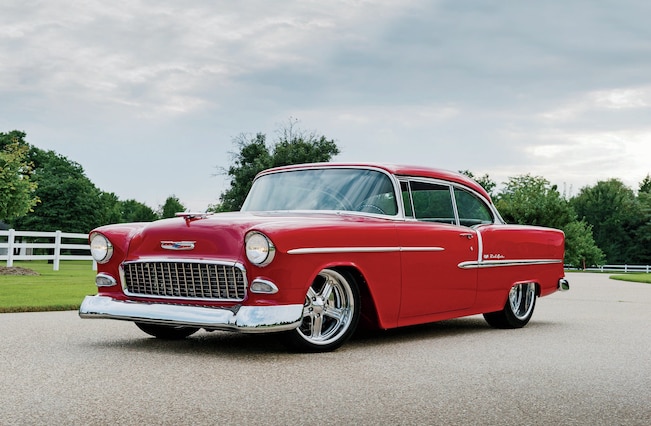 Yeah, so Dusty Cox is another enthusiast who was born a bit too late to experience the Tri-Five in its heyday. By the time he could legally get behind the wheel, those cars were already as popular and as coveted as the ’32 Ford. World War II babies were lucky. When they were coming up, Tri-Fives were all over the joint like flies on toast and eggs. Essentially, they were raw material, just as the first-gen Camaros would ultimately become.

Dusty Cox is 56. In 2006, he got wind of a local car that had stood as a silent sentinel in somebody’s garage for more than 30 years, a garage that was two miles down the road from his son Jimmy’s house in Fort Smith, Arkansas. As a result, the ’55 Bel Air hardtop he dragged out the door had very sound sheetmetal, and that satisfied his criteria, but his little professor self had already envisioned parts most modern beneath that all-original skin. So it was on, albeit not at a rapid pace. For six years, Dusty and sons Rusty and Jimmy put themselves into this car.

Dusty has been busy with automobiles for a long time, specifically his ’32 and ’33 Ford coupes and ’59 Impala raggie. He immersed himself, created Dusty’s Collision Center in Pocola, Oklahoma, just a baby step beyond the Arkansas border. There, the Cox crew bombed the car in expectation of the Roadster Shop chassis, a stern piece of steel guaranteed to tighten up the foundation, and they added Heidts Pro-G repertoire to this special ladder. The steering rack points Heidts 2-inch drop spindles and Aldan adjustable coilovers cycle within tubular control arms. In the back-half, the Cox collective put up the sexy independent rear suspension system that surrounds a 9-inch coconut (3.50:1 gears, limited-slip) and includes four Aldan coilovers and trailing arms. They completed the scene by posting Heidts antisway bars at both ends of the Bel Air.

Though this vintage Chevrolet has the trappings and air of a Pro Touring celebrant, it is not particularly that. Dusty drives it, shows it (big emphasis here), and loves talking about it with others of a like mind. Stance was critical. He chose the stuff that would do that the best. The adjustable suspension and the right width and offset of the big ’n’ littles clarify the work, and that indelible blood red wraps it tight. Beneath the Budnik X-Series Groove hoops (18x8, 20x10) and Dunlop Sport Maxx 050 skins (235/45 and 295/40), Wilwood stoppers prevail. At front, 13.98-inch discs with six-piston calipers; the rear setup is located inboard and includes 10.5-inch plates attended by four-piston calipers.

All of this was congenial for the fat Rat, a GMPP ZZ572 rated at 620 horsepower and 650 lb-ft of grunt. With an engine of this magnitude there was no reason for further modification. It was fitted with a Street & Performance air cleaner and Sanderson full-length headers featuring 1 7/8-inch primaries and 3-inch collectors and exits positioned just aft of the wheels. The Cox boys chromed the pipes and dressed out the engine with Street & Performance billet detail kit and accessory drive system. Companion to this, a GM-built 4L80E fixed with a 2,200-stall converter. Action is abetted by an aluminum fluid cooler.

Though the Bel Air slurped up lots of time with mechanical preparation, the body gobbled a large chunk of it, too. Before swarming the exterior, the family rebuilt and recontoured the engine compartment and inner fenders to showcase that ZZ572. For the body, laser-straight lines, seeming eons of block-sanding, and the PPG base and clear coats represent the Dusty’s Collision signature, as it were, though Rusty Cox did the application. “Basically, we kept the body stock because we didn’t think we could improve upon it,” said Dusty. Devoid of only the sideview mirrors and stuffy bumperettes, the Bel Air still proudly displays driprails, door handles, and all of its original ornaments.

An interior as appealing as the one in the red Chevy is becoming easier to produce, though the Cox boys found it beyond their realm. While the car was still in shambles, they trucked it to Chuck Rowland’s CAR Upholstery in Broken Arrow, Oklahoma. Chuck sealed the original glovebox so that the implanted Vintage Air vents delivered flow at a more advantageous angle. He filled the horizontal expanses with ribbed plates, implanted a Classic Instruments comprehensive pod, and finished off the tilt steering column with a Budnik Teardrop wheel. Chuck marched on, building a flow-through “console” between the custom front and back seats, putting up the headliner and fashioning the door and rear panels as well. Somewhere in there, he’s sequestered high-end JVC audio components.

So another father-son bonding job has gone famously well and there have been accolades: in 2013, the five-five was included in the NSRA Top 12 Pro class; in 2014 it cinched the Goodguys staff pick and the NSRA Mid-America Top 5 Pro category.

So it appears as if the Big Red One isn’t really red after all. It’s golden.