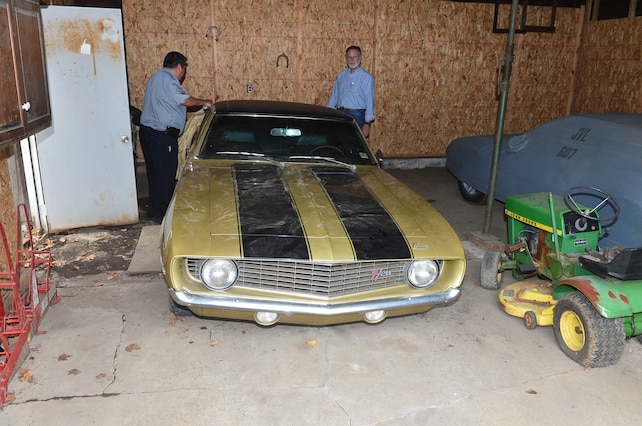 "He said he really loved the car and he wanted it to last."

This 1969 Chevrolet Camaro Z/28 will last. Its new owner will simply clean it, no restoration necessary.

Jim Leonard bought this Camaro new in 1969. On the first day, he put the car on blocks "because he couldn't figure out exactly what he was going to do with it," said his cousin Gunnar Steward.

On the first day, he put the car on blocks

I got to ride along for this car's 2015 unveiling. Most of the time, readers send me photos after the hoopla is past. Michael Lightbourn and I met Gunnar Steward and John Flack, another one of Leonard's cousins, in Media, Pennsylvania, at Otto's Car Repair on State Street.

I thought the Z was in Otto's shop. Instead, the car was next door in an old garage in the backyard of a 19th century house.

"This garage used to be an old carriage house," Steward said, as we walked toward Camaro gold. He opened the door and we walked inside to see two cars draped with covers.

Michael Lightbourn (left) and Gunnar Steward peeled back the car cover to reveal an unrestored 1969 Z/28 in Olympic Gold with black stripes.

Apparently, Leonard loved his Zs. Later, Kevin Otto, from the shop next door, told me, "He bought that '84 because it was the last year for carburetion."

I couldn't wait for Steward to slide off the cover to see what Michael believed to be the lowest-mileage, undiscovered, and unrestored one-owner Z/28 left in the world. What hit me first was the strange color—Olympic Gold—with black stripes.

"Wow, you don't see that color very often," Lightbourn said. He had flown to Pennsylvania from El Paso, Texas, to see the muscle Chevy, after negotiating with Leonard's estate for the past two months. He was ecstatic with the sight of original paint. The interior, likewise, was untouched.

We popped open the hood to discover an open-element air cleaner devoid of decals. "Not all of the cars had decals," said Lightbourn.

He began checking numbers, starting with the air horn on the Holley carburetor. Check, all correct. Followed by the engine code on the boss on the front of the block. Another check. He moved from the engine block to the transmission.

Leonard had passed away two years before, ending his care program. He left no children or wives to inherit his estate, and Leonard was a collector—coins, miniature cars, and comic books, in addition to Z/28s.

The Z/28 was really looking sharp parked on a rollback. From here, we loaded the car onto the enclosed trailer for the trip to its new home.

Steward spoke of summer days decades ago when Leonard drove his prized Z/28 to the local Dairy Queen, a favorite hangout where hot cars cruised on Saturday night.

Meanwhile, years passed as "Jimmy" (as his friends called him) worked at Scott Paper and drove his Chevette to work.

"He wasn't the kind of guy to blast up and down State Street in the darn thing," said Otto. "He had a gorgeous C10 Chevy pickup with a 454."

Otto spoke of Leonard driving the car to his shop for an inspection sticker once a year. Then he would "go home and park it again."

He would never throw anything away on the car

Otto told me Leonard "put most of the mileage on the car when he first bought it."

The last inspection sticker I could see was dated 1994. Apparently, the Z/28 hasn't been started since then.

Lightbourn had uncovered a rust-free, original-paint Z/28 with a one-owner history, a car that, in Steward's words, was "bought new about 5 miles from here from a Chevrolet dealership that used to be on Route 1. It's never left town."

Media is less than 10 miles from Berwyn, Pennsylvania, home in the 1960s to one of drag racing's giants, Camaro legend Bill "Grumpy" Jenkins.

Leonard had the foresight to keep the original Sports Car 200 tires that were on the car when he took delivery in 1969.

"[Leonard] idolized him, followed his racing career, and would to go to different events just to watch Jenkins race," Steward said.

I think Jimmy Leonard would be pleased to know his car is in the hands of a collector who will continue to make this Z/28 "last." This Camaro Z/28 is more than a matching-numbers, one-owner classic. The originality and low miles mean this car will not be restored. It will tickle the fancy of car enthusiasts for many years to come. The car will remain untouched. As we speak, Steward is hunting for the smog system, which wasn't on the car.

"He would never throw anything away on the car."

There are bigtime collectors now who collect unrestored muscle cars. This Z/28 qualifies, both with low mileage and with a preservation program by a man who knew, from day one, this Z/28 was something special, something he really loved. Thanks, Jimmy.

We pushed the Z/28 from the garage into a slight drizzle. Steward said that this was the first time the car had ever been in rain.