Before the Boogie Man goes to bed, he checks his closet for Randy Normandin’s shiny, black axe 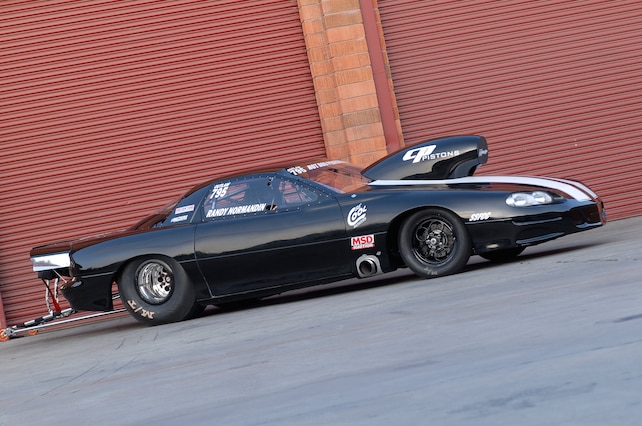 Maybe we should have called this story “Hot Rod Confidential.” It’s about more than a piece of inanimate metal. It’s about cold, stark realization. Randy Normandin had separated from his wife on a permanent basis and had virtually lost contact with the rest of his family because he lived in the clouds with his cars, his car addiction—a condition not to be considered lightly. It’s a plight all too common in this hobby. It only wanes when you realize what the important things in life really are: family, and nurturing it as much as possible.

“I got back into racing two years ago. I’d been doing it for 25 years. I’d discovered that I was missing out on my kids’ growing up. I sold everything so I could spend more time with Zack, Krista, and Nick. I admit it. For 25 years I was a race-a-holic. Racing came before everything. I was supposed to be my brother’s best man at his wedding. I said no because there was a race that day,” admitted Randy. “I didn’t wake up until Zack started high school. I finally implemented what I knew was right all along. My kids really were more important than anything else.”

But the yen never really leaves, never takes a day off. It’s in you nasty like nicotine. There you are slumped in the last row of the classroom. Mind projected somewhere beyond the confines of the four walls surrounding. Then, the test.

“I got a smokin’ deal on this car, one I couldn’t refuse. The difference is that now I race after the kids and when I want to. It’s not a job to me anymore. We’re starting to have fun now that the kids are older and we can all enjoy it. I guess it’s about growing into your responsibilities.” Sensible words, a credo even, for those who will be attending Drag Racers Anonymous for the rest of their lives.

Then up popped his old racing buddies Bob Griffith and Eric Lenore like a freaky jack-in-the-box. They’d raced this fourth-gen in Outlaw Street for two years and won two championships with it. Early in season three, Bob crashed. He decided to backpedal a little. When the reformed Randy heard about the offering he knew it was the right time to get back into scene.

He bought the tube-frame car in May 2006. It sat for six months. Randy looked. He touched. He got ready. He took it to Li’l Brian Motorsports in Norco, California, who cut out all the gnarly stuff and put in all the good stuff. He fabbed upper and lower control arms and tempered suspension movement with adjustable Santhuff coilover shocks and installed Wilwood discs on Santuff spindles. The car was originally built by Greg-Seth Hunter in Northridge, California, with a four-link rear suspension, Santhuff coil-spring-over-shock absorbers, and Wilwood discs, all of which were left intact, as were the fabbed 9-inch housing, the Strange Engineering spool, the 40-spline axles, an antiroll bar, and the 4.30:1 ring-and-pinion. The leading wheels are 15x3.5 Weld Magnums with M/T 25.0x4.5 ET Fronts. The black-lipped drive wheels are 15x14 Weld Magnums wearing 33.0-10.5x15W Mickey ET Drags.

The packaging is sinister, brutal, and absolute. Black, the very absence of color, emotes whatever cannot be quantified in the light of day and when you combine an all-black body with black wheels, you’re really on the highway to hell. When you put that up with a Glasstek modular front end and an impossible hood lump, you conspire to bring down the world (or at least look like it). Do those white stripes signify mercy? Don’t bet on it. Ron Henderson did the bodywork and applied the obsidian black and the wide stripes at Henderson Custom Paint in Hawthorne, California. Dale Richards, in Lomita, California, did the subtle graphics. The minimal accent brightwork was enhanced by Decore Plating in Gardena, California.

Whatever psychological implications you might conjure, you’re bound to back them up with some serious whomp up front. Larry at Motor Magic in Big River, California, machined the rudiments of a 632ci bullet (4.60-inch bore x 4.75-inch stroke) from a 1972 454 cylinder case. Mark Millhollin at Hot Rod Performance in Torrance, California, grew the thing with top-notch pieces that include a Cola crankshaft, GRP aluminum connecting rods, and 14.0:1 CP pistons. Mark used ARP hardware at every turn. He plumbed the thing with a Stef’s 7-quart oil pan and an Edelbrock oil pump.

With the engine upright once again, Mark loaded up one of Estol Fletcher (you can call me Sonny) Leonard’s hairy valve timers (0.837/0.780-inch lift and 286/320-degrees duration at 0.050) and connected it to the crankshaft with a ubiquitous Jesel beltdrive system. Reciprocation begins with the Isky roller lifters and cigar-sized 7/16-inch pushrods, thence to Jesel shaft rockers with a 1.70:1 ratio. A Meziere electric water pump finalized the front of the engine.

The cylinder heads are no less prodigious. Dart Big Chief castings provide a 12-degree valve angle, 2.40/1.90 valves, and 94cc combustion chambers. The Dart tunnel-ram manifold has been tweaked with a wooden spacer to stifle heat sinking and accepts twin 1,150 Holley Dominator carbs. With a nitrous oxide application, cylinder pressure peaks the meter, hence the vibrant, steady spark kernel from an MSD Digital 7 Plus electronic ignition system. Tate’s Custom Headers custom-fabbed 2 1/4-inch stainless steel primaries for the big Rat, merging them with Borla 5-inch collector mufflers. Randy works at Edelbrock so it was certain that he use its Direct Port system, one that now offers as much as a 600-shot (twice the advertised bump). Randy conservatively rates the nuts-only engine at 1,000 hp at 6,500 rpm.

He lassoes formidable grunt with a magnesium-case three-speed Bruno/Lencodrive, a planetary transmission that’s controlled by an electric solenoid that activates hydraulic compression of the clutch pack. The main drive body is machined from billet stock and the gears (2.44, 1.82, and 1.00:1) are shifted manually. It works with 10-inch TCI torque converter and a 4,500-stall speed. Torque is transferred via a Driveshaft Master (Harbor City, California) propeller shaft.

The interior is no more accommodating than it must be, offering Auto Meter Carbon Fiber gauges in a custom panel, Kirkey race seats, and Simpson safety stuff.

Before the Boogie Man closes his closet door every night, he peers in the darkness and is at last reminded of who helped create his nemesis. Says Randy: “My friend Smitty Smith helped out corralling the parts I needed and made contacts with industry people who could also lend aid. Danny Castillo and all the people at MSD did, Be Cool’s Roger Rosebush and Fred Militello, CP Pistons’ Dave Berry and Snake, then Don, Dave, Mike, and Harold at Meziere, Nolan Warren and Rod at Isky and Mark and Jennifer Millhollin at Hot Rod Performance did, too.” Most of all, Randy gives props to his crew guy/helper Rick Snavely, mostly for going beyond the call whenever he’s needed.

Randy’s already working on an alternative power module, a smaller, “economical” engine festering with the latest technology. The bullet will be nothing more than a 426-inch small-block flying on twin turbos, a combination that promises to be very easy on the engine and even easier to maintain. For him, consistent, repeatable performance is the key, as well as the goal.