Subtle Supremacy: This 800-horsepower 2001 Camaro redefines the meaning of “SS.” 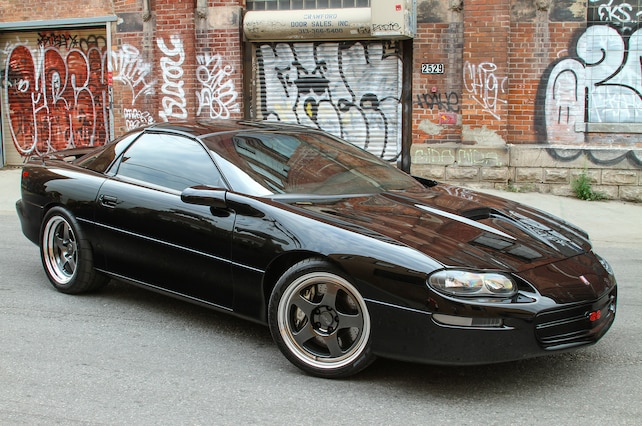 Let’s be honest: In this era of legit 1,000-horsepower street cars, a big dyno number alone doesn’t guarantee a feature story. Attention to detail counts for just as much and a cleanly executed project that displays unmistakable vision is more likely to interest an editor.

Take Brent Schubring’s 2001 Camaro SS, for example. At a glance, it looks like just another black fourth-gen F-body. Big whoop, right? You’ve seen it a million times. But no, not one like this. With just about 800 horsepower it’s not the most powerful Camaro on the street—although it’s hardly a slouch—and without a fiberglass factory’s worth of superfluous exterior mods it hardly stands out among a generation of winged late-models, and that’s just the point.

With subtle yet devastatingly effective appearance upgrades and an unconventional induction system, it’s one of those cars that make a fresh, contemporary statement within a “been there/done that” genre. It’s surprisingly refreshing, too, in this age of supremely customized fifth-gen Camaros that Schubring has doubled down on the earlier generation. In fact, doubling down is an apt description for his commitment to the car, after getting knee deep into it about a decade ago.

“I bought the car when it only had about 4,000 miles on it,” says Schubring. “But it wasn’t long before I sent it off to Decatur, Indiana, for one of Lingenfelter’s head-and-cam top end kits. It was a lot of fun.”

Well, it was a lot of fun for a while. As most of us can attest, Schubring became accustomed to the higher performance threshold of the Camaro and the thrill began to wane. More to the point, the desire for greater power became too much to resist. He sold the Lingenfelter-built LS1 and channeled the proceeds toward the parts for a 403-inch LS2. Before Schubring got too far into it, however, life intervened.

“I changed jobs, my wife and I changed residences, and all those other things that come along with adulthood,” he says. “Five years later I had a roller Camaro, no engine, and not a lot of direction, but my wife encouraged me, suggesting that if I was finally going to do something with the car, I should do it right.”

With the theme from Rocky building slowly in the background, the vision for the Camaro began to take hold. The engine—or lack thereof—was the Camaro’s most obvious deficiency, so Schubring started there.

“I wanted a stealthy boulevard bruiser that did all its work from stoplight to stoplight, without having to rev it beyond 7,000 rpm,” he says. “And by the time I dove back into the project, larger-displacement combinations were becoming more popular and I was on board with that idea.”

That’s when Shawn Miller Racing Engines, down in Virginia Beach, Virginia, entered the picture. The folks there guided Schubring to a 460-cube combination, using a “seasoned” RHS block as the foundation. It was matched with a set of big-flow Mast PXR Inline 12-degree, six-bolt heads boasting 290cc intake runners and the valves splayed 3 degrees. Original plans for a sheetmetal intake manifold were scrapped when it was determined it wouldn’t be suitable for daily driving, so the decision was made to go with the uber-sexy Kinsler ITB manifold. With its carbon-fiber air horns and exotic cross-ram appearance, it looks like a million bucks under the hood—which is great, because its approximate $7,000 retail price makes a FAST LSXR intake look like a Black Friday giveaway special. And needless to say, it beats the hell out of the dull black plastic of, say, a factory LS7 intake. The Kinsler ITB manifold is paired with a set of 85-lb/hr injectors.

“It was a serious investment, no doubt about it,” says Schubring. “But it’s one of the defining characteristics of the car and it really performs as good as it looks. I couldn’t be happier with it.”

It’s also more power than the stock T-56 six-speed and 10-bolt rear axle could cope with on a sustained basis, so Liberty Gears beefed up the Tremec, which was matched with a Katech LS9X twin-disc clutch, and Midwest Chassis built a bulletproof 9-inch axle for the Camaro. Likewise, the brake system was enhanced with Cadillac CTS-V front brakes and a hydroboost assist system from Hydratech Braking Systems.

Rather than relying on vacuum for braking power, a hydroboost system uses pressure from the power steering pump. Its two big advantages are greater, more consistent stopping power and a big reduction in underhood real estate—which is already at a premium in a fourth-gen F-body. In fact, it was a huge help in fitting the Kinsler intake system in Schubring’s car.

“The hydroboost system stops the car hard,” he says. “Compared to the pretty vague, underpowered feeling of the stock Camaro SS brakes, it’s a whole new feeling of immediacy and confidence—especially when you’re running fast.”

Additional chassis and suspension upgrades on the car include UMI Performance upper and lower front control arms, rear control arms, and front and rear stabilizer bars. They’re all matched with Eibach Pro springs and Bilstein shocks. The UMI tubular control arms are not only stronger than the stockers, they’re a little lighter, too. A stronger Panhard bar and torque arm from Midwest Chassis help keep the Fikse Profil wheels and Toyo tires planted.

In the front, the Fikse 18x9.5 wheels are used with Toyo Sport 275/35ZR18 tires, while in the back Schubring squeezed in a pair of 315/35ZR18 Toyo TQ drag radials mounted on 18x11 rims. The chassis setup doesn’t break any new ground, but that’s just fine because its mix of proven components and sticky Toyo tires gives the car tremendous grip and firm launch characteristics.

Where Schubring’s car ventures into new territory, however, are the surprisingly minor exterior mods that leave a huge impression on every F-body fan that views them. Simply put, he filled in the foglamp openings and phony inlet on the grille insert. That’s it. But the effect is stunning. It looks like a new—and more specifically, a newer—car.

There’s a lesson about restraint and vision to learn here, because all the glue-on spoiler, rocker moldings, and scoops don’t hold a candle to the devastatingly effective change in appearance achieved with comparatively minor plastic surgery.

Yes, we’ve just about seen it all when it comes for fourth-gen F-bodies, but Brent Schubring reminds us all that a little creativity and unwavering attention to detail can turn even the most jaded of heads.

We upgrade the brake pads and rotors on our 2001 Chevy Camaro Z28, Black Betty, thanks to the help of Wilwood.