The Illustrated Corvette Designer Series, No. 213 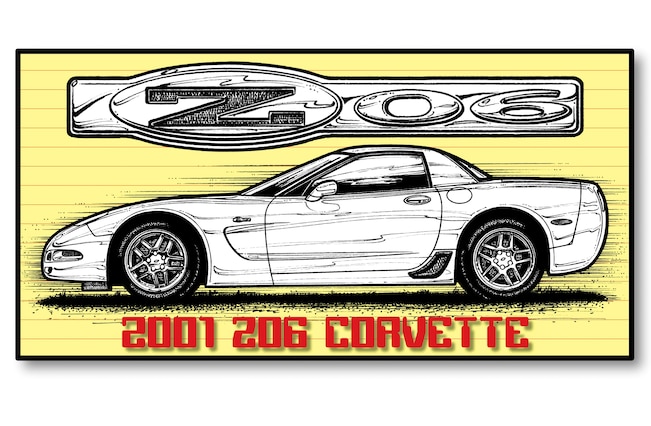 The C5 Z06 was born thanks to two special efforts: the new C5-R factory racer and the 1999 hardtop model. The hardtop was supposed to be the stripped “performance” model fans lusted after for decades. But after manufacturing considerations and the strong demand of the luxury-oriented ’98 Corvette, the hardtop model only cost $394 less than the base coupe, plus there was minimal trunk space, and no rear hatch. Sales of the hardtop in 1999 were slow, only reaching 4,031 units (12.1% of total Corvette sales) and, 2,090 units (6.5%) in 2000. The good part was that because the hardtop roof was bolted and bonded to the body, the overall structure was stiffer than the coupe! Ahh, a potential performance version!

Product planners reached back to the Z06 racer-kit option from 1963 for the new performance model moniker. To start, the Z06’s LS6 engine shared the LS1’s block. Then the air cleaner, intake, and exhaust manifolds had their ports smoothed out and higher-capacity fuel injectors were added, along with a new PCV system that reduced crankcase pressure. Compression was 10.5:1, up from 10.1:1 in the LS1, thanks to new pistons and redesigned pent-roof combustion chamber heads. Power was up to 385 hp at 6,000 rpm and 385 lb-ft of torque at 4,800 rpm. The clutch and driveshaft were beefed up to accommodate the extra grunt. The transaxle was left stock except for the more aggressive ratios and a 3.42:1 axle. The FE4 suspension received revised shocks, larger stabilizer bars, and a stiffer rear spring, and front and rear camber was adjusted for improved stability. New wheels and Eagle F1 SC tires were larger too, 17x9.5 with 265/40ZR17s up front and 17x10.5 with 295/35ZR17s at the rear. The Z06 was light too, weighing just 3,126 pounds, 117 pounds less than the coupe. Savings came from lighter wheels, no spare tire, thinner glass, and titanium mufflers.

The interior was available in all-black or black-and-red leather, with extra side bolsters, Z06 embroidery on the headrests, and a 6,500-rpm tachometer. The shifter feel was improved by eliminating the rubber bushings and a transmission-temperature sensor was added. Electronic dual-zone air conditioning was included. The exterior featured rear side brake scoops, mesh inserts in the front grilles, and special “Z06” fender badges.