Life lessons for the past 28 years 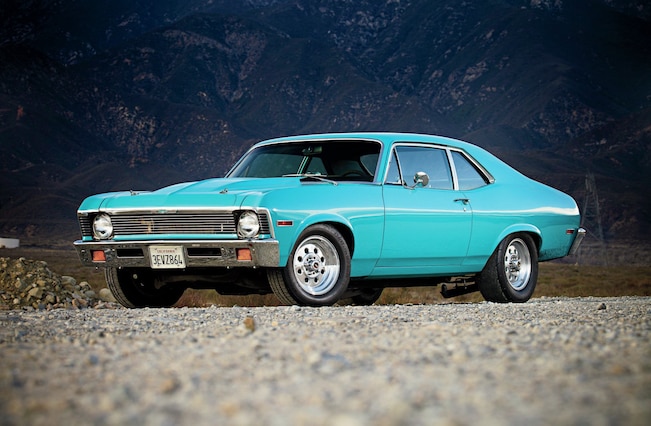 Were you just a casual CHP reader, you might get the idea that the high-dollar cars featured here are the normal currency of the realm, when in fact they merely represent the fringe, the candy, the what-I-could-do-with-suitcase-fulla-dough mentality, when the core of the business is infused with enthusiasts much less fussy and with goals much more attainable. Since the hot rod is their own, they take responsibility for as much of its creation as possible. In this way, the car becomes a learning tool and a fine bonding agent for the builders. Luckily, Jim Makerov was a tool-and-die maker and had raced a ’65 Nova in A/Modified Production in the ’60s.

It may also be a matter of humility. Son Mike Makerov says this: “Honors or awards earned? Not a one. My Dad and I didn’t build the car for that. We built it to spend time together and see what we could do on a fixed budget and my Alpha Beta box-boy checks.”

Makerov the younger’s hot rod life began in 1986. He was 16. He paid $1,350 for the ’71 Nova and drove it home. Dad’s constant tinkering had inevitably drawn his son into wrenching on cars so he was ready for the next big step. There would be no jump to power. The idea was to use the 307, learn with it and make it dead-nuts reliable because Mike needed it for school and then a job after that. Though envisioned mainly as a sticky-back-tire straight-line destroyer, the Nova would see road duty as well and Dad knew a lot about building an engine combination that would catapult the Nova from a peanut butter sandwich daily driver status to a street-and-strip creature straight out of the old-school archives.

Over time, they upgraded the rear axle with 10-bolts…that disintegrated on a regular basis before they stepped up to a much stronger 12-bolt fitted with 3.36:1 gears and a Powertrax differential. Instead of swapping out the automatic for something “stronger,” they’ve remained loyal to the Turbo 350. Chino Hills Transmission improved it and included a 3,000-stall B&M Holeshot converter. The Makerovs installed an auxiliary fluid cooler but retained a stock Chevrolet driveshaft.

In their garage in Chino, Jim and Mike prepared the chassis with simple bolt-ons, combining Competition Engineering subframe connectors, aluminum body mounts, and traction bars. They rebuilt the front suspension with PST bits and added Moroso coils and Comp Eng adjustable shock absorbers. They retained the antisway bar but run it loose for drag racing. They plugged PST polyurethane bushings in the spring eyes of the ’69 Camaro multi-leafs and finished with Comp Eng adjustable dampers.

Since neither the agility nor the braking energy were issues, the Makerovs saved thousands by rehabbing the factory disc/drum setup. Since this is an old-school-driven project, 15-inch rims were a given. Weld Drag Lites shine all the way around in 7- and 8-inch widths. The rubber is generic, too: 205/70 BFG Comp T/A chased by Mickey Thompson 255/60 ET Street Radials.

In 1988, the men replaced the 307 with a stout 383 that served until 1992. Then it was big-block time. A 0.030-over 454 that they’d built for Jim’s ’57 pickup was curiously diverted to the Nova mainstream. In Ontario, California, the Wilson Brothers performed the requisite machine work, ground the crank, and performed the dynamic balancing. Meanwhile, up in San Jose, Victory Machine fussed over the cast-iron closed-chamber oval port cylinder heads. Jim spent lots of porting and polishing time and then assembled them with Manley valves and COMP Cams springs. The cast crankshaft, refurbished stock rods, and 9.5:1 Speed-Pro forged pistons comprise the rotating assembly. It’s connected to the COMP 280H cam (0.520-inch lift; 230 degrees duration) by a Pete Jackson geardrive (how’s that for old-school?). COMP 1.7:1 roller rockers are tipped by COMP 7/16-inch diameter pushrods. The Makerovs upgraded the oiling system with a Milodon 8-quart sump and a Melling high-volume pump.

The top of the engine hosts a vacuum-secondary Holley 4150 750-cfm carburetor (with K&N filter) on an Edelbrock Performer intake manifold. Spark flares from an MSD 6A box and Mallory Unilite distributor and timing is all in at 36 degrees. Noxious gases are extracted by Hooker Super Comp headers featuring 1 7/8-inch primary pipes and 3-inch dumps trailed by a 3-inch exhaust system channeling into Flowmaster mufflers. Mike: “The engine makes in the neighborhood of 450 horsepower and 450 lb-ft and I shift it at 5,700 rpm. It’s been in the Nova since 1993, with a fresh one (bearings, rings, cylinders honed, valve job) built by me in 2003.”

Resourcefulness is key to the budget build. You use what you can when you can. To that end, though it might not follow air quality code to the letter, an open-air forum (perhaps with a roof) for bodywork and paint is copacetic on California’s myriad calm days.

Mike: “Thanks to my good friends Doug and Mike Trow, it took about year for the bodywork and to get it ready for paint. They sprayed it on New Year’s morning 1994 in their backyard carport. After waiting about a week for it cure, Mike decided he wasn’t happy and said he was going to shoot it again. After another week of complete color-sand and prep, he shot it again.” Ten years later, the PPG single-stage Turquoise (mixed by Mike) pops brilliant and looks like it went on yesterday.

In the fun room, Mike directs the proceedings from a ’92 Mustang seat that Classic Upholstery in Montclair, California, dressed in cloth. The dashboard is stock, although a trio of ancillary meters depend from its bottom. The 5-inch Auto Meter tachometer is not stock. While he clicks the B&N Holeshot ratchet (Line-Loc attached), he handles the Grant Elite GT steering wheel. Though air conditioning is not part of this scheme, amplified tunes are. Mike chose a Sony AM/FM/CD 40-watt, 4-channel head unit, and Orion 230W amp, two Pioneer 6-inch 3-way speakers in the door and put another pair of Pioneer 6x9 3-way speakers in the package tray.

Since the Makerovs and friends were willing to put so much sweat into this project, Mike estimates that the cash outlay for the last 28 years was a piddling $20 grand—the cost of a “modern” engine and driveline these days. If you’re looking for monster performance here then please turn away. Amazing empirical data was not the object. The Nova is about a partnership, not a killer car. Mike lays rubber on the Irwindale eighth- and the Fontana quarter-mile. At a 3,800-pound running weight, it has produced a best of 12.64 at 108.

But the racing is just one part of the attraction. The other is conveyance in a social atmosphere. Mike does the annual Corn-Feed Run and never misses the gathering at Manna Donuts Sunday mornings in Chino.

“Really thinking about it now,” said Mike. “The Nova is a great looking and performing car that my Dad and I got to build together. But more than that, it taught me patience, how to solve problems, how to earn what you get, how to plan, how to take care of and appreciate what you have, how to make various parts come together and work as a system, and how to keep making things better. My Dad passed in March 2013, but my wife, Julie, had Liam, our first child, in September of that year. So the Nova will have another go-around at bonding father and son in the garage while I teach my son the same life lessons that my dad taught me.”