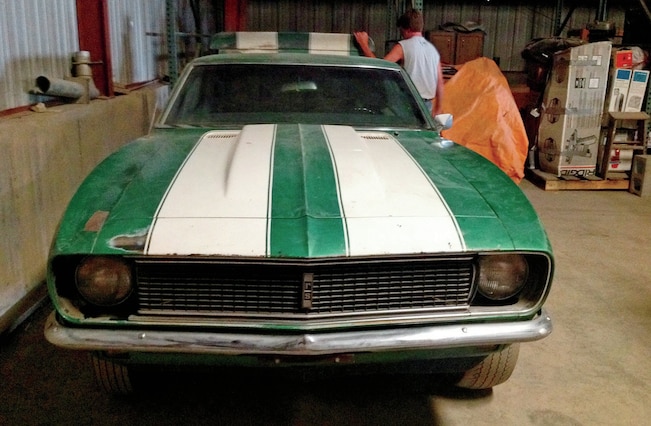 "He said, 'You know, Mark. You're the sixth caller. I could have sold this car many times over, but nobody believes me. There's no Z/28 badges on the fenders.'"

Mark Helm was undeterred. He told Mike Wergin, "We're just going to have to dig into that a little bit."

Mark was the right person to do the digging. Ten years earlier in the middle of a midlife crisis, he started a restoration with a 1968 Chevrolet Camaro Z/28 "shell." He says, "I went through the painstaking process of certification through Stefano Bimbi at Nickey Chevrolet in Chicago before starting a restoration."

Turns out Mark had to track down an entire Z/28 driveline, not easy stuff for a beginner. By following "Jerry MacNeish's teaching on what to look for," Mark restored his 1968 Z/28 shell. In the process, he learned 1967-1969 Z/28s extremely well. Maybe this '68 was a real Z/28? Mark would be able to tell. The hang up was the Z was in Casper, Wyoming, 993 miles from his home in Hayward, Wisconsin.

Mark got his chance to investigate the Z/28 on a vacation to the Black Hills with his wife Cathy and a good friend. He persuaded them to detour through Casper.

"He popped the blanket off the '68 Z/28, covered in dust. The whole engine bay was covered in grease and dust and everything else," said Mark.

The engine bay, despite the 42-year accumulation of dust, became a field of dreams for Mark. He put his decade of research to work.

Although complete, the car had no paperwork and no Protect-O-Plate. The codes did add up to a real 1968 Z/28. Another telltale sign of a factory Z/28 was the air pressure sticker inside the glovebox. This sticker revealed 15x6 wheels, unique to the Z/28 of 1968.

Two weeks later, Mark and Cathy decided they should buy the car. Mark called up two buddies—Eric Rolland and Gary Hite—and the three of them took off to get the Z/28.

Mark said, "We never get together for three days like that because of all the responsibilities. We had more fun talking about old flames and old rides, and we just had a blast. I couldn't believe how much fun it was. Wherever we stopped people were all over that car. At one stop a bunch of kids from a tech school surrounded that car. They wanted to know all about it."

At one stop, a bunch of kids from a tech school surrounded that car

For $23,000, Mark purchased a 1968 Z/28 in Rally Green with a white Houndstooth interior and a matching-numbers drivetrain. The body was rust free and the odometer read 46,000.

Before Mark left Casper, he asked Mike to call if he found "anything on this car."

Two weeks later Mark answered the phone. It was Mike.

"He says, 'Mark, you're not going to believe this. I have that Protect-O-Plate thing you were talking about.'"

Mark Helm was elated with the deluxe white Houndstooth interior, very rare on a 1968 model.

Mike found the metal warranty tag in the bottom drawer of his gun cabinet while hunting for shells. Now Mark has his Z/28 documentation and is very excited to begin the restoration at Eric's Classic Auto in Baldwin, Michigan.